The Reality Tour of Nanjing 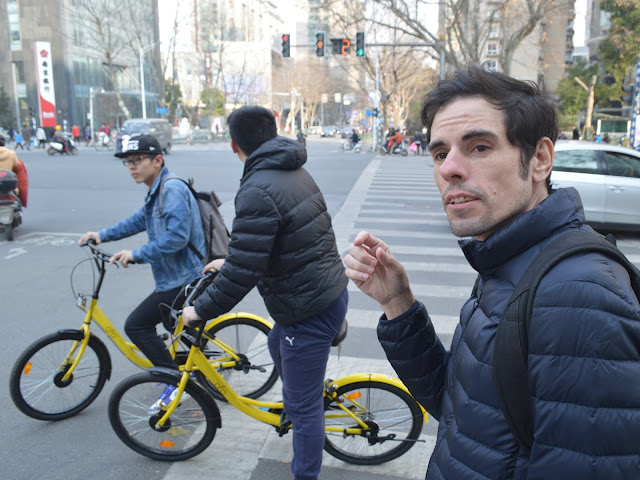 Moving to a new city brings with it many new opportunities for tours. As well as tours of local museums and historical sites, the usual suspect tours, there are often more informal tours that also accompany any move. This tour is one of those: I moved to the Nanjing last week and was offered a tour of the neighbourhood by a friend and colleague. 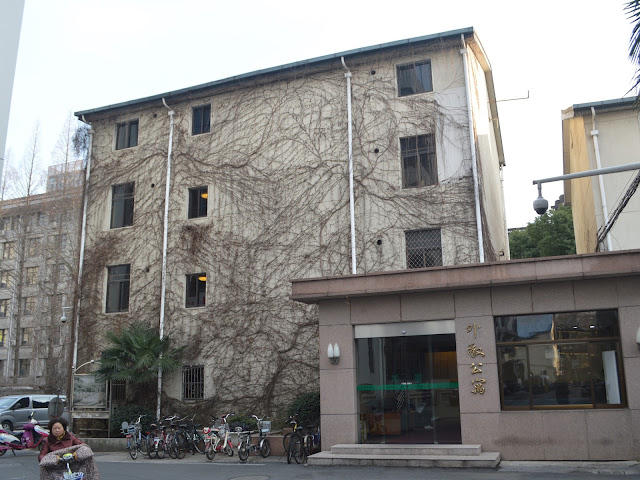 As we walked the streets and talked about the city and university that we both work at, the  subject we, or I should really say, seemed to keep drifting back to was accommodation. When I arrived fresh off the train I was first taken to this building with the glass door where the foreign staff are housed. My passport was scanned and I was handed a key by a surly receptionist before I was whisked away to a gloomy concrete block in a different corner of the campus. It seems I got the bum deal and ended up in the overspill apartment block which does not have central heating. When we passed beside this block, which is so suffocatingly hot you have to leave the windows open in mid-winter, I was left to rue my misfortune at being assigned to my fridge of an apartment in a city where winter temperatures can drop to -10ºC. 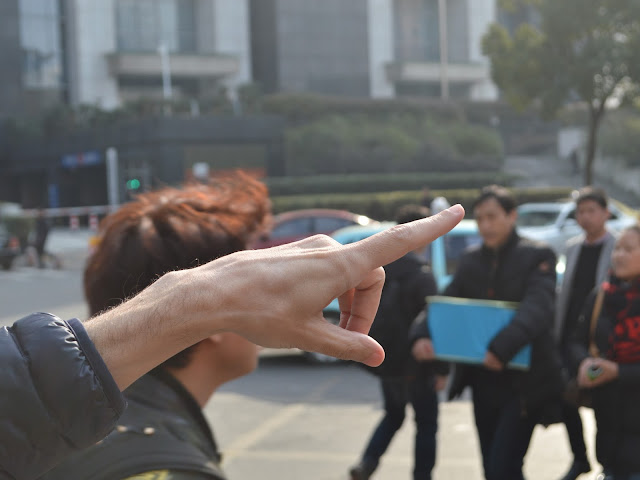 He has a wonderfully sculptural hand which he frequently used to point things out: the subway station over here, the main shopping area down that way. The fact that the hand and finger weren't perfectly aligned made them all the more addictive. 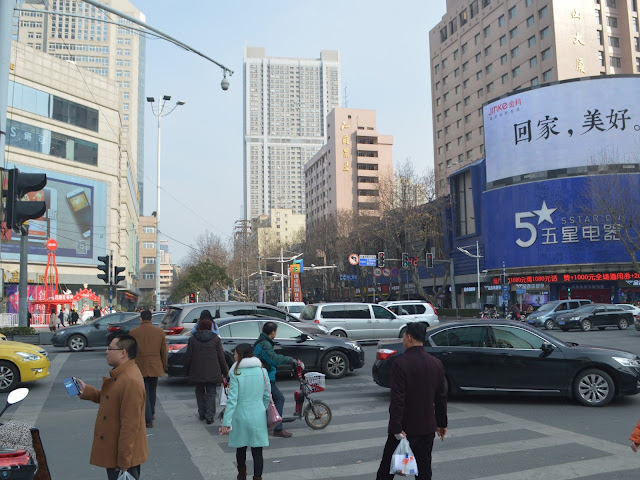 As we made our way around one of the scruffier parts of the city centre, we talked about the job, the students and our colleagues. None of them were actually there in front of us so this conversation produced a sort of collage of urban bustle and Chinese higher education. Trying to simultaneously focus on the two lead to elisions and omissions but I daresay that some of the connections were not wholly random. While it was clear I was not meant to read one through the other, it strikes me that it can be hugely pleasurable to do just that. This, in fact, might just be the basis of an interesting audio tour experiment: take a forty minute talk on a specialist topic and inscribe it onto a landscape with definite 'turn left, stop at the lights,' directions spoken within the body of the talk. For example, a few pages from the popular economic book Why Nations Fail grafted onto Leeds City Centre might make for an interesting experience. 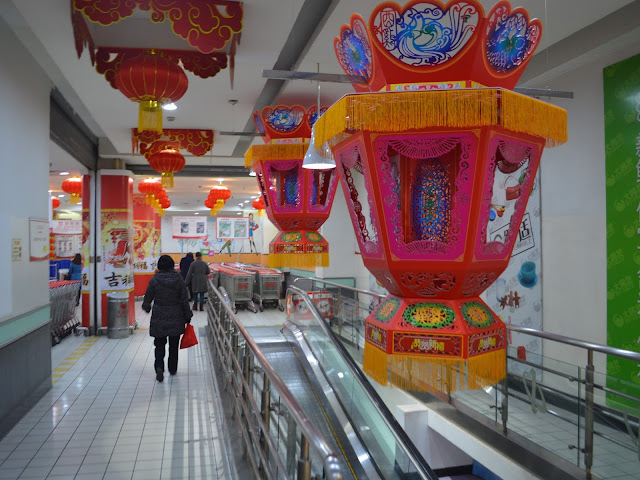 His city tour didn't include or even mention the nearby local market but instead brought us to the nearest supermarket which was decked out with card lanterns. Neither did we go through nor talk about the alternative entrance to the campus on the west wall. When I stopped to think about this I realised I have a thing for knowing my entrances and exits and would include them in even a rudimentary tour. The simple fact was he used a different set of coordinates to mine and moved between them using a different system of navigation too. 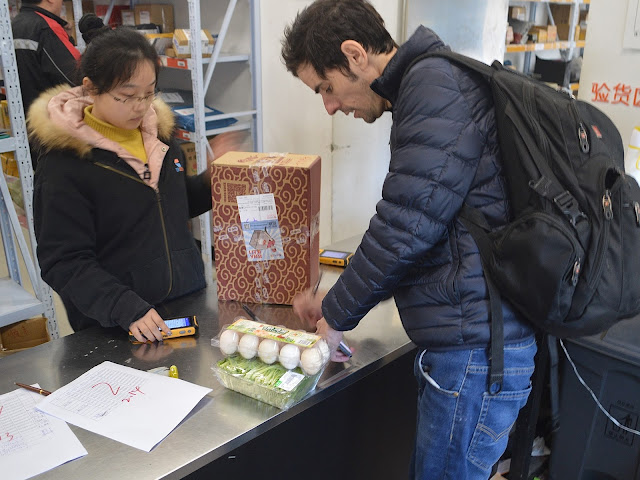 Where our mental maps seemed to converge was at the parcel delivery office. I rather liked that this tour was not only based upon the showing of places and things as a detached observer, it also included the guide engaging in some of his daily life actions. Here, the showing took place, at least in part, through the doing. This style of tour is not unusual for  workplace initiation tours or if you have family visiting and you are not busy but it is interesting to imagine how it could function otherwise. Taken to its logical conclusion it would mean a person shows you their unadulterated daily life: you accompany them for a period of time and they explain what they are doing while doing it. I believe that there have been attempts by artists in Berlin to do just this, to effectively market themselves as a lifestyle, but how successful this has been I cannot say. I would imagine the observer's presence must inevitably alters the guide's daily activity because people want to show the best of themselves. This reality tour principle does, however, have the potential to be something rather unusual, if taken to its logical extent. 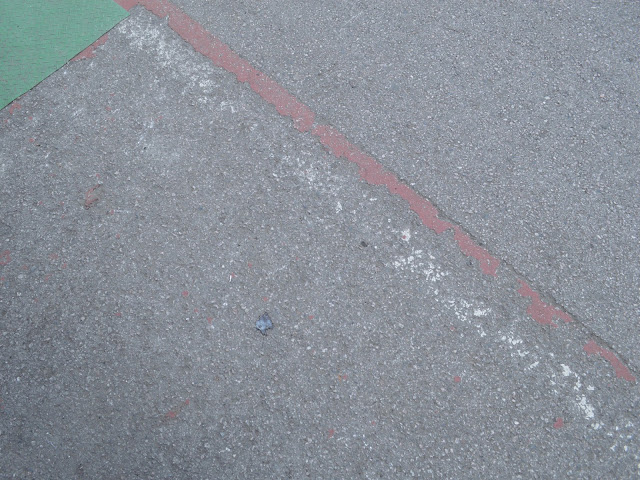 The tour came to a close in a very special way. After we stepped outside the university shop, he cleared his throat, spat on the pavement and muttered, "I'm becoming a bit Chinese." I have heard of a number of Westerners, well Western men, adopting this habit after spending time here. Where he still showed his foreignness was in how he forcefully spat it out whereas the far more common way I see the pros here do it is that they first hawk up a glob of phlegm, manoeuvre it to the front of the mouth then simply open wide and let it dribble out. In any case, this was a fittingly unaffected way to end for this reality tour of Nanjing: pavement punctuation, a full stop written on the concrete.
Posted by Bill Aitchison at 10:32