Booking Information: The Shanghai Tour of All Tours

The Shanghai Tour will be taking place daily from the 6th to the 15th of June as part of the Xintiandi Fringe Festival. The booking link is here. 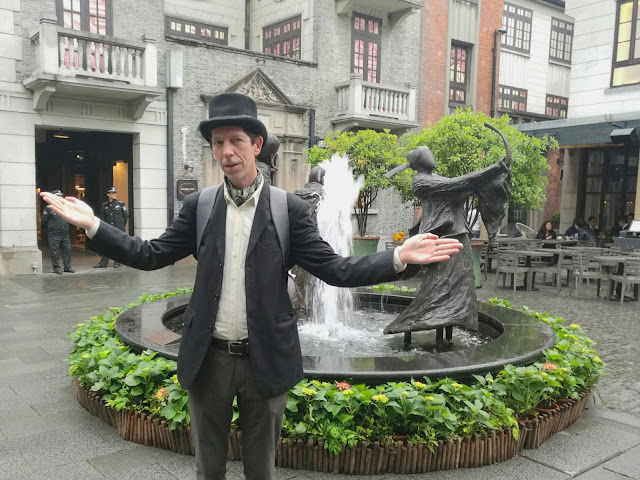 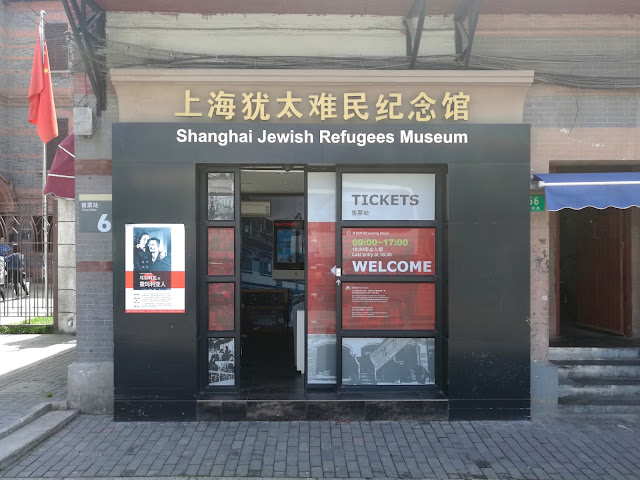 I have noticed that there are Jewish history tours in many cities across Europe and I have been meaning to take one of them for a while to see what they are like. For one reason or another I never got round to it but did instead recently discover that there was one in Shanghai. I never realised that the city had a significant Jewish history so, rather than discovering the Jewish history of Paris, Prague or Porto, it was to China's most populous city Shanghai that I turned. 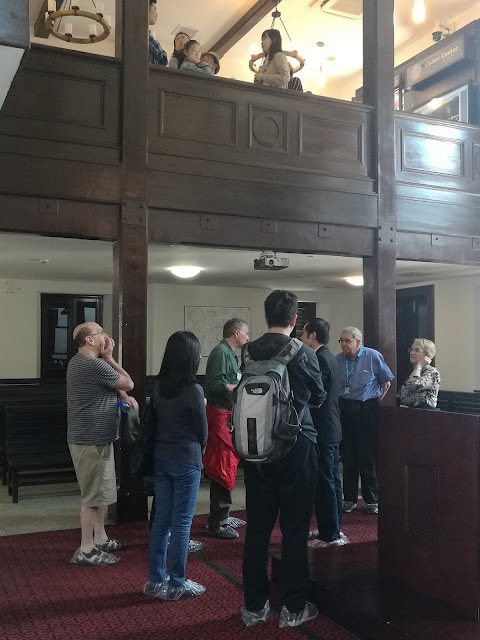 I found it amusing that when I stepped inside I was asked to wear an elasticated plastic bag around my shoes. The reason given was to keep the place clean but, since I have not had this request in other museums, I began asking myself whether it was because the building was a former synagogue. Lost in such speculation, I didn't precisely catch what the guide was trying to tell my group. I was on the English language tour and my group mostly consisted of elderly Jewish American who had come on a Smithsonian Journeys package tour of China. Upstairs, another group was on the Chinese tour. 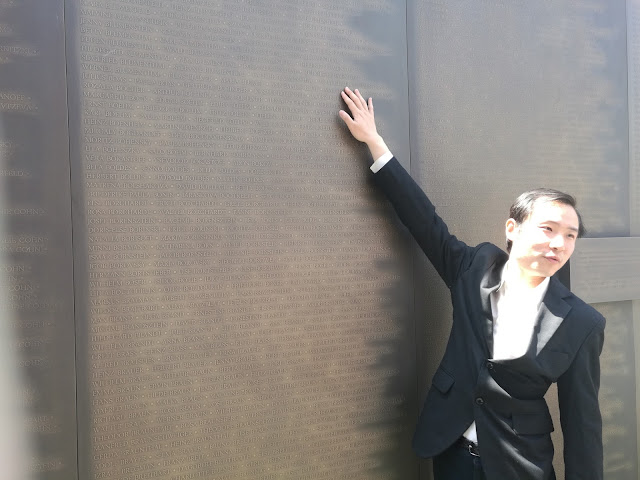 On this metal wall outside were the names of the Shanghai Jews as recorded in the city register. I saw two American men studying it carefully, looking for the names of family members. They were clearly moved when they found one. Our guide, however, had no obvious Jewish ancestry. He did, however, have a keen interest in Jewish history and culture and while he had an odd accent, even by Chinese standards, his English was good and he could tell the story with some precision and charm. 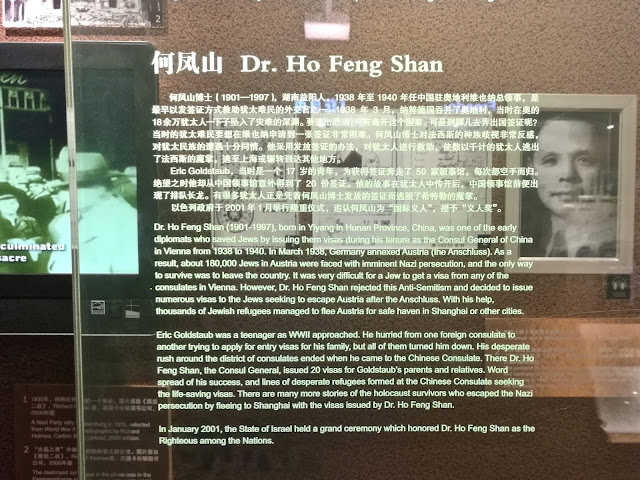 Stepping into the modern museum, we watched a grainy video and were then shown around the exhibits. We touched upon this one about Ho Feng Shan who our guide dubbed 'the Chinese Schindler'. It seems he had a particularly vivid life and there was only time time to hear about his role in issuing a large number of exit visas permitting Jews in Austria to escape to Shanghai. His actions were not officially recognised in his lifetime, indeed he fell out with the ROC government who denied him his pension over a dispute he claimed was politically motivated. Settling in California, it was only after he died that he was publicly thanked and his wartime actions held up first by Israel and then, interestingly, by the PRC. At least, that is how the history is told here. An interesting candidate for a bio-pic, I would say. 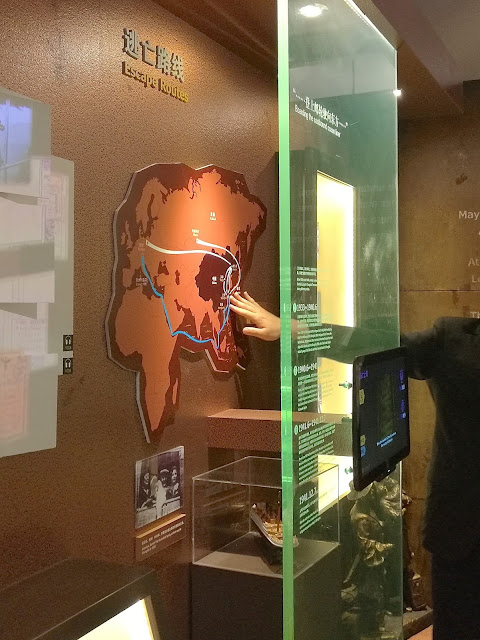 The guide stopped to show us this map of the different routes Jews took to come to Shanghai. Because the museum contained so much material, when explanations were given at all, they were often somewhat rushed in order to keep the tour under an hour in length. This meant I did not appreciate until later that different Jewish groups had been settling in the city for some period of time before the war and there existed stratification amongst them. 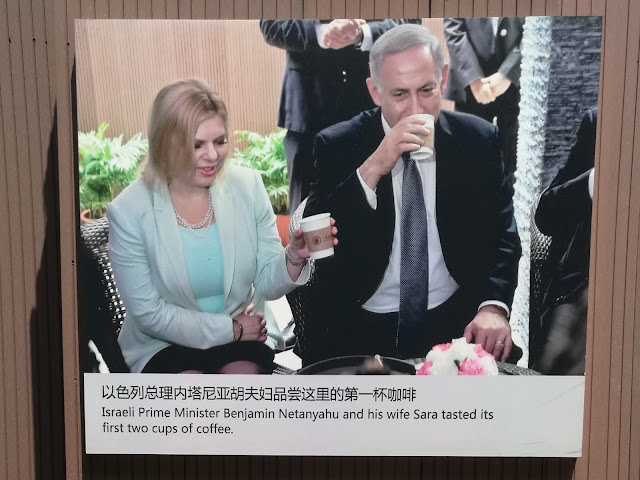 This picture of the Israeli Prime Minister put a face on something I had been increasingly feeling through the tour. Namely, that in order to understand this museum it was important to understand the processes by which it came about and to ask whether it served any purposes in addition to that of remembrance. The narrative of the Shanghai Jews, while known to some, was not celebrated until fairly recently. A number of things had to happen to thaw what were not immediately warm relations between the states of Israeli and the PRC, created in 1948 and 1949 respectively, in order for this episode of history to be given the embassy treatment. In China that would be the process of political and economic reform from the 80s onwards. In Shanghai, its relative calm during the political turbulence of 1989 combined with the more recent taking stock of and promotion of the city's heritage, must figure too. As for the Israeli side, I know less, though there are, apparently, early movements afoot in transforming Hongkou into a 'new Xintiandi' with Israeli investment. Whether these financial relations are simply the fruits of improved diplomatic relations and a shared history or are in some way the motor for political engagement and cultural diplomacy, is difficult to say.

This is the short video Xie Xie Shanghai that was made in 2015 and which features Benjamin Netanyahu, amongst others, saying thank you to the city for providing Jewish refugees shelter during the war. The video is curious in that it mixes a political message  with tourist aesthetics. The beach and bar scenes come straight out of a 'Visit Israel' promotional video and is another example of the tourist gaze exceeding itself and finding its way, now, into state level diplomacy. 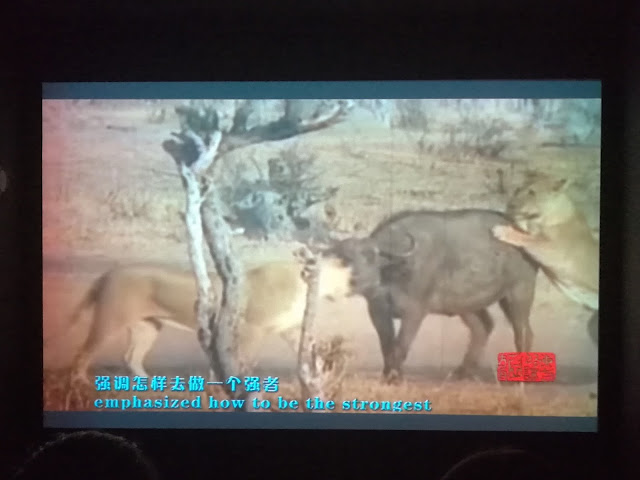 The top floor of the museum was where Shanghai's Jewish history was put into the service of political education. Most notable was this educational video (chapter 4) that contrasted Western thought with Chinese thought. Western thought was characterised as conquering nature and as the science of evolution, which slid effortlessly into Nazism, while Chinese thought centred upon living in harmony with nature. Confucian values were attributed to the Jewish American politician Michael Blumenthal, values that rubbed off on him during the time he grew up a refugee in Shanghai. Essentially, anything positive was linked to traditional Chinese culture while anything negative was of Western origin. I had the impression that whoever produced the video was not used to having to defend their opinions in any sort of open debate. If they had, they would have had to have come up with something a bit more refined and robust. In the UK such a video would simply be laughed at then ignored but here it passes for normal. 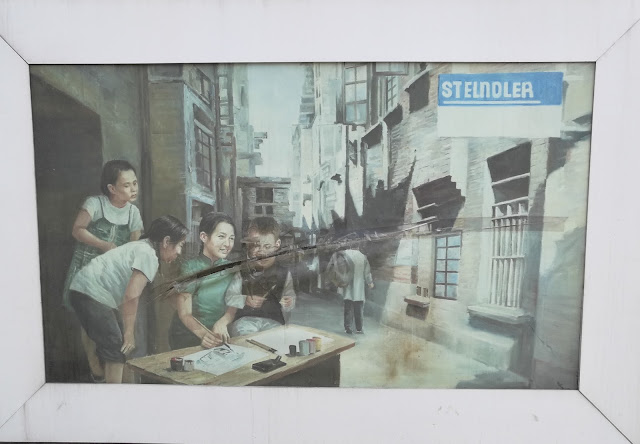 The museum is today's focal point to the Jewish heritage of Hongkou, but the neighbourhood also has a walking route taking in other historic sites, too. There was not so much to see and a guide would have helped to bring the otherwise blank addresses to life. Disturbingly, a series of public artworks on the side of the street commemorating the area's Jewish heritage, had been slashed. This one shows the youthful American artist Peter Max, being taught to paint. Who did this, or why it happened, I have no idea. There is no significant history of anti-Semitism in Shanghai, as far as I am aware, but there is more to this story than my brief tour could reveal. 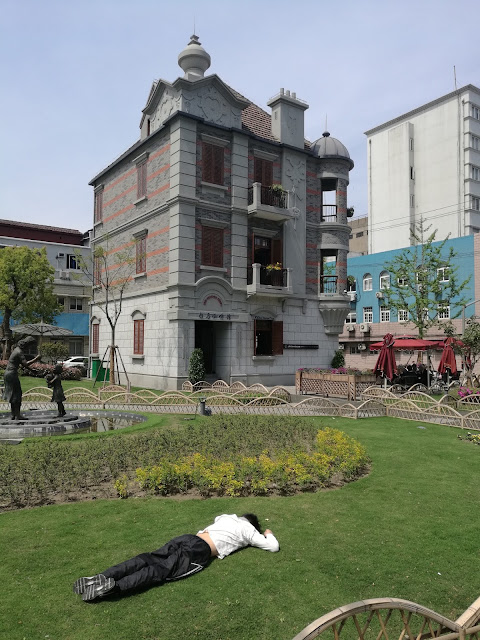 Final stop was The White Horse Cafe, a reconstruction of a Jewish cafe that used to do business nearby. The place was unusual not only on account of the man inexplicably crashed out on the lawn outside, but also because it was a European-style cafe run by and for Chinese customers. I should be used to this concept by now as we have had French-themed cafe chains in the UK, such as Cafe Rouge, for a while. I seem to remember that last time I went to a Cafe Rouge (a rare event) they had employed some foreign students as their waiters, but I also recall that the whole place felt like a protracted and ever so slightly embarrassing fancy dress party. White Horse Cafe had the same vibe. Here, this game was augmented by an exhibition upstairs about Polish Catholics saving Jews. The exhibition was sponsored by a southern Polish regional governmental body, an area trying to establish connections in Shanghai on the back of the Jewish Refugee Museum. While the story that the exhibition panels recounted was no doubt true, the whole thing smacked just a little too obviously of political opportunism to be taken entirely at face value.
Posted by Bill Aitchison at 08:38 5 comments: