There will be a new format tour that will be given for the first time this Summer in Birmingham. For the next edition of Still Walking I will be leading a tour in getting lost. Some people seem to have a natural talent for getting lost whilst some of us have to work harder in order to get properly disoriented. This tour will be a systematic attempt to get lost and to reflect upon the meaning and poetics of losing ones way.

Dates and booking details to follow nearer the time on the Still Walking Website.
Posted by Bill Aitchison at 11:59 No comments:

The workshop will focus on two things: performing in the city space and making paths that lead people through the city. The participants will spend two days understanding and experiencing central Beijing from unfamiliar perspectives and then sharing these discoveries with one another. The participants will be encouraged to explore subtle styles of performing and they will create their own material. This will involve a mixture of practical exercises in the city space led by Bill Aitchison, theoretical discussions and the opportunity for the participants to create a short walk of their own.

The workshop is suitable for people who have an interest in the city and how it functions and in how art and performance can be integrated into living city spaces.

Bill Aitchison is an inter-disciplinary performance artist who has presented his work in galleries, theatres and festivals in Europe, Asia, America and The Middle East. He holds a practice-based PhD from Goldsmiths College is published in several languages, has worked in radio and is associate research fellow at Birkbeck College, University of London.

IFP is now accepting registrations for participants, if you want to join please write to workshop@iprovoke.org

Participation fee: 150 RMB for two days.
The workshop be given in English with Chinese translation.

Posted by Bill Aitchison at 13:03 No comments:

The Tour of All Tours at the Bookwork Literary Festival, Beijing 2014

Here are some pictures from the performance of The Tour of All Tours in Beijing, presented as part of the Bookworm Literary Festival 2014. 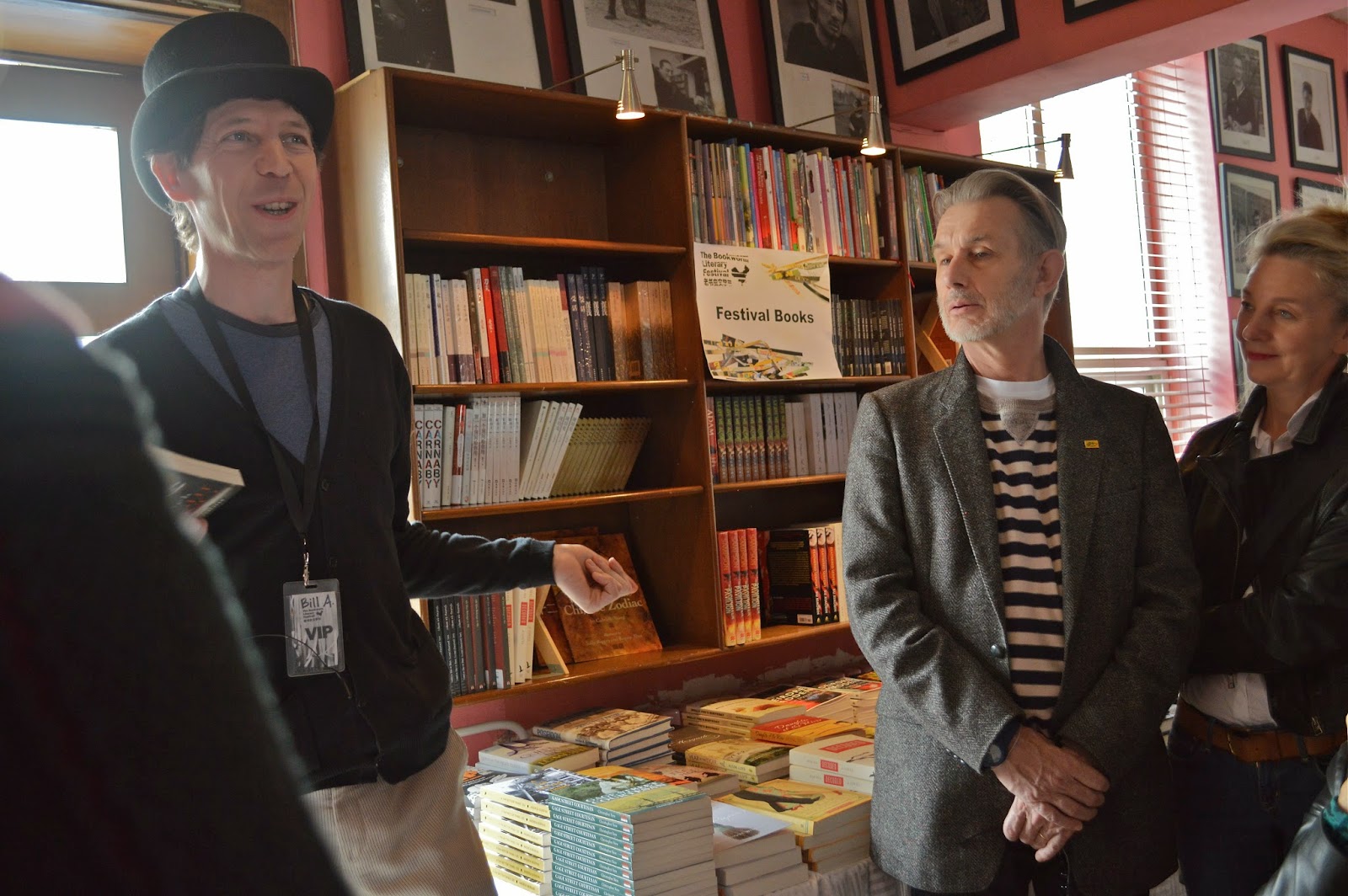 The tour started in the bookworm itself with a review of an audio tour around the station area. 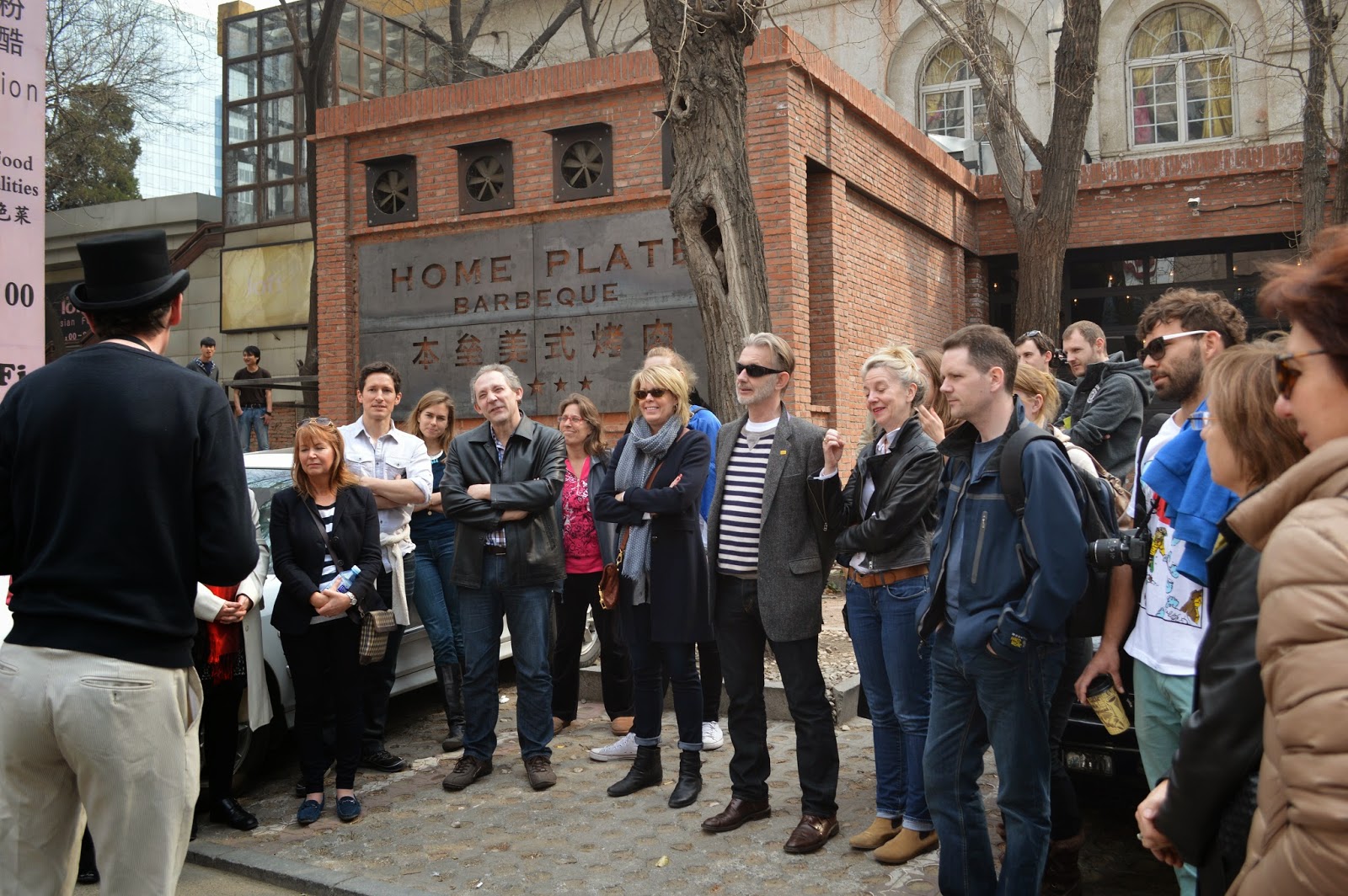 The tours that were covered were very different with a good number of them from other cities. The details were smoothed over so as to make it ambiguous whether this was a tour of Beijing or a projection of the tourist gaze. The one exception that would not allow itself to be smoothed over was the 'Occupy Beijing Tour'. This was so unlikely that it was interesting in its own right in so far as it described a tour that would not be permitted. Standing in front of the Bank of China, we started to look a little like the tour we were describing. 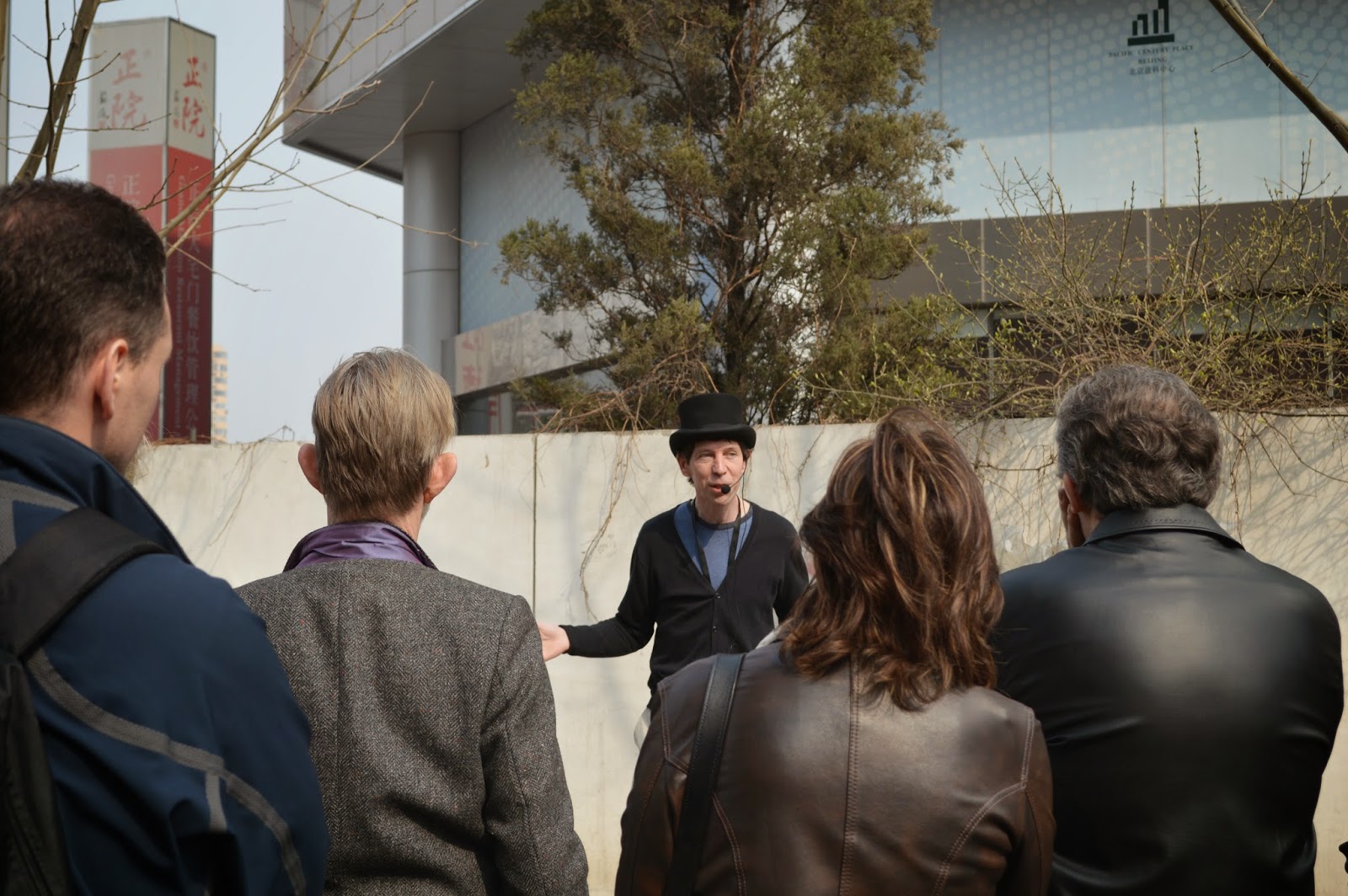 Rather than describing this performance, something best left to someone watching it, it is more interesting to describe how it seemed to function. The format of the tour, even with the caveat of it being an art tour, brings with it a way of watching and participating. That and the great weather meant for a laid back audience. 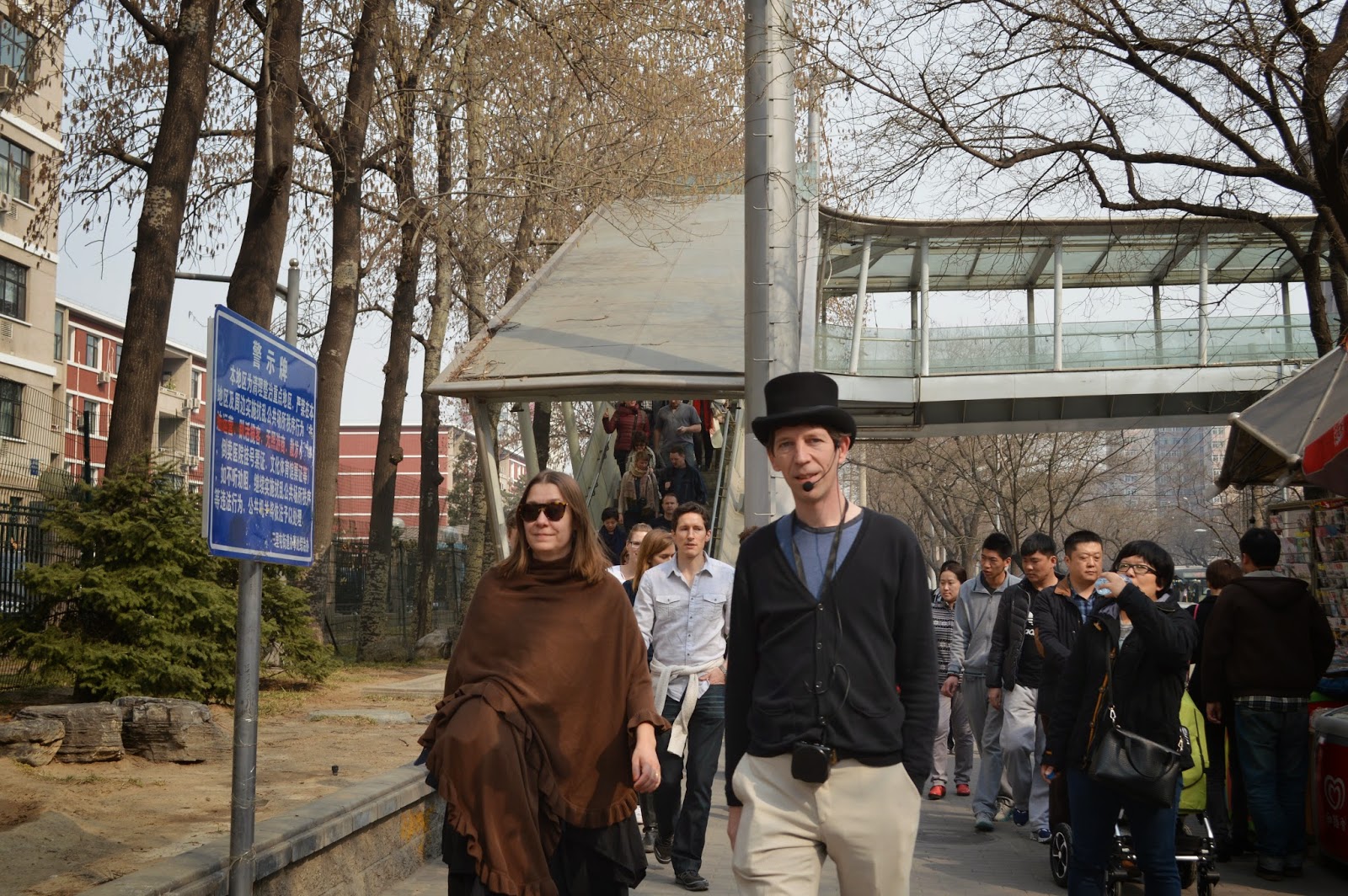 The group was made up more of Westerners than of Chinese spectators, so we attracted a bit of attention in our own right as a minor spectacle. The hat no doubt helped. 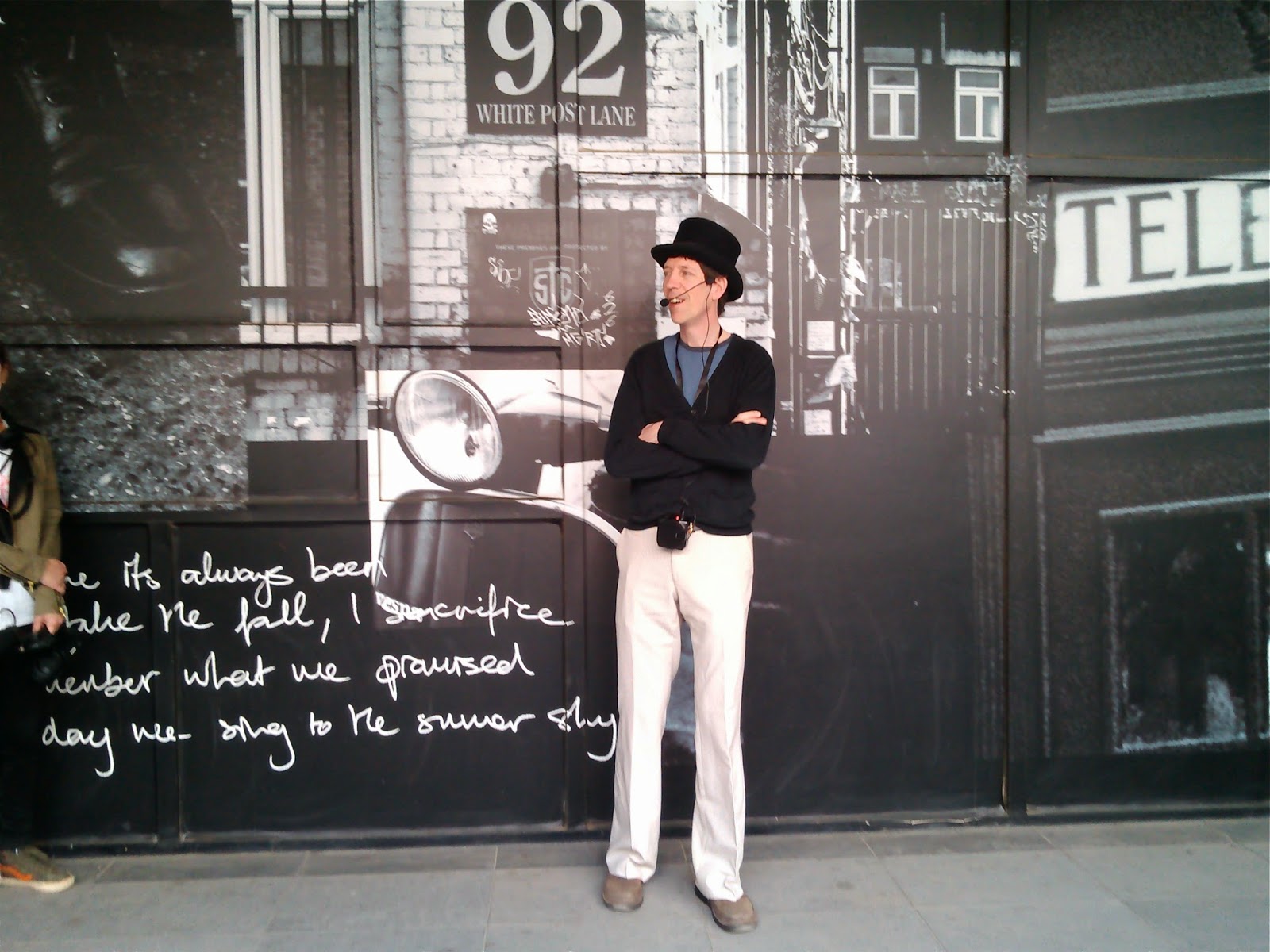 It was great to be able to talk about The Olympics and East London and make comparisons between Hackney Wick and Sanlitun, an area that was developed significantly ahead of the games. Certain structural similarities connect the areas such as the displacement of poor people and their not very profitable businesses. 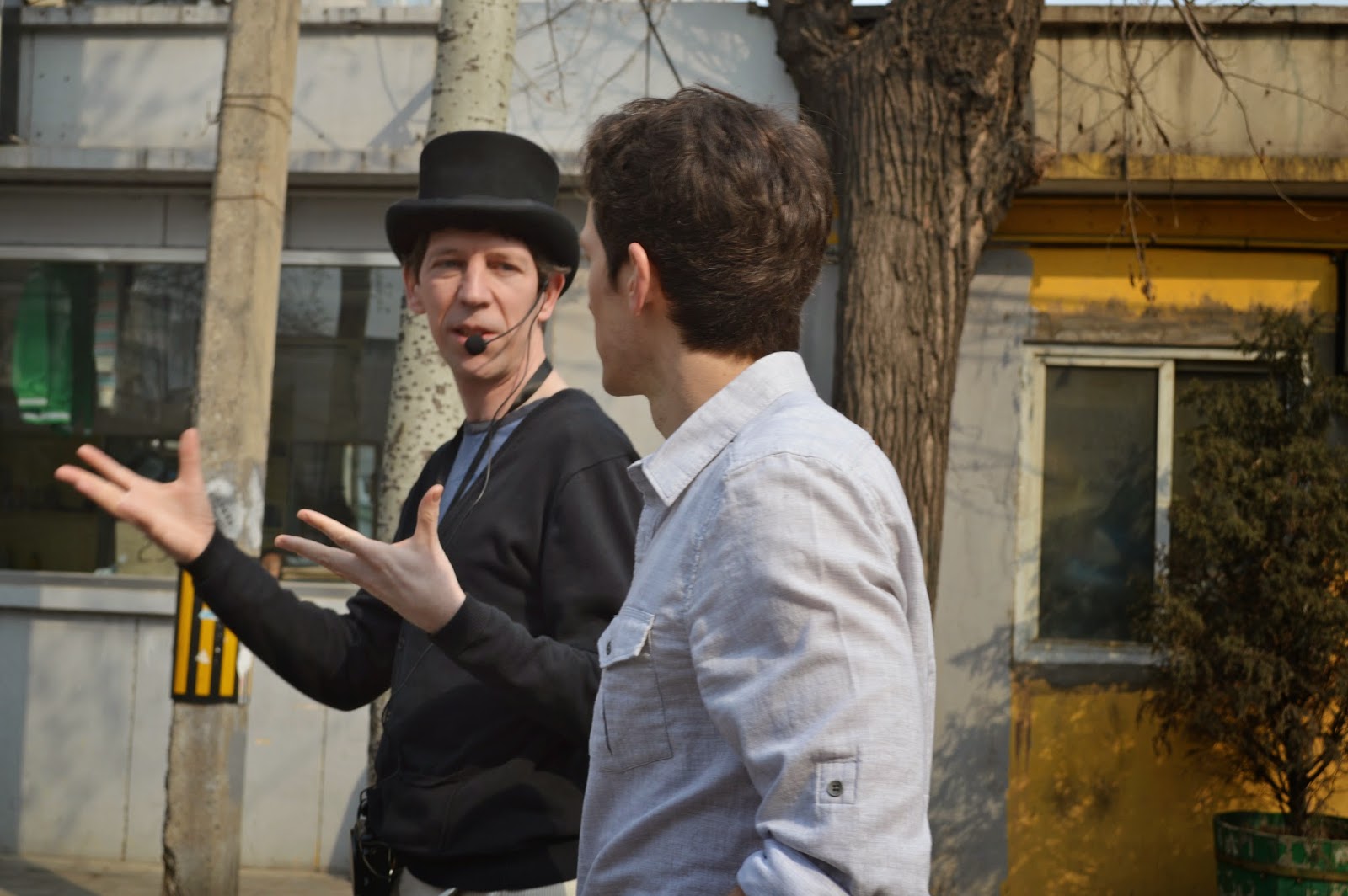 I enjoy those moments in the tours between stops when you talk in a more informal way with the spectators. I have to retain a performance sensitivity yet engage with people in an unforced manner. It is in these moments that you realise there is no escape from performing. The mask of sincerity is usually the best option. 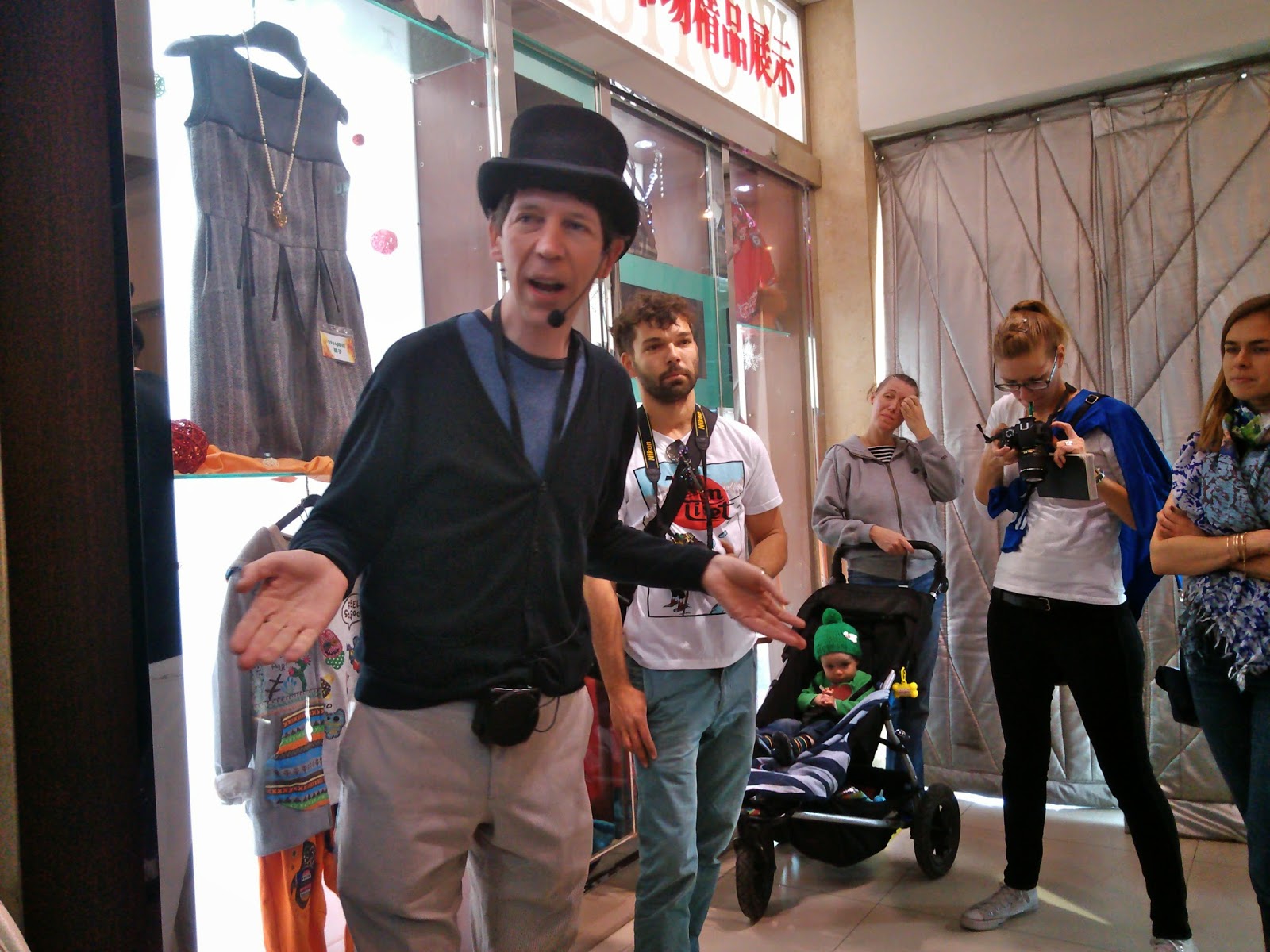 Something I was not counting on happened. Taking the group through Yashow Market, I lost 2 or 3 people as they were spirited away into shopping mode upon seeing a dress they liked the look of. That is when I realised that it is not just me who engages in the event in more ways than one but so to do the spectators: as tourist, as art viewer, as shopper and as self, to name but four. As for the baby, he was probably the most centred of us all and hadn't leant the different roles he could play in this game of being the tourist.
Posted by Bill Aitchison at 12:12 No comments:

Workshop on Tours and Site-sensitive Performance: IFP Beijing May 17-18th

The first of what will be a number of workshops this Summer has now been confirmed. It will be hosted by the Institute For Provocation in Beijing and will take place on May 17th and 18th at their workspace in Heizhima Hutong. The workshop will be given in English with Chinese translation and will combine practical and theoretical approaches with some work in the city space. Bookings will be able to be taken shortly.
Posted by Bill Aitchison at 11:32 No comments: