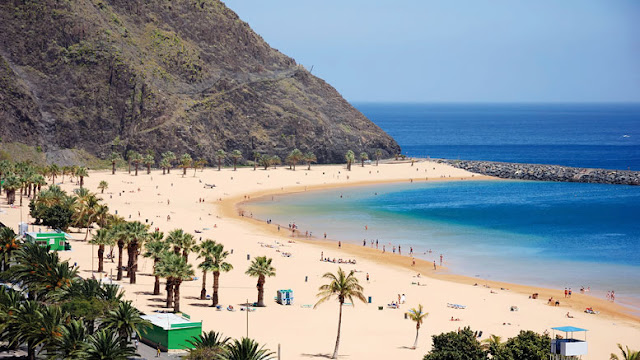 Popular tourist destinations usually cater for simple tourist needs very effectively with a mix of food, relaxation, nightlife and so on. This easily translates into a set of unwritten rules that govern what you should do in order to have a good time when on holiday. These rules can be quite narrow and expanded tourism 101 is a five day invitation to break them and re-imagine what tourism can be. You will perform a number of tasks individually and in a group that will turn you into the active creator of your touristic experience and give you something to think and talk about for some time to come. In the spirit of Expanded Tourism it will take place in an atmosphere of enquiry, adventure and fun!

The activities will include: 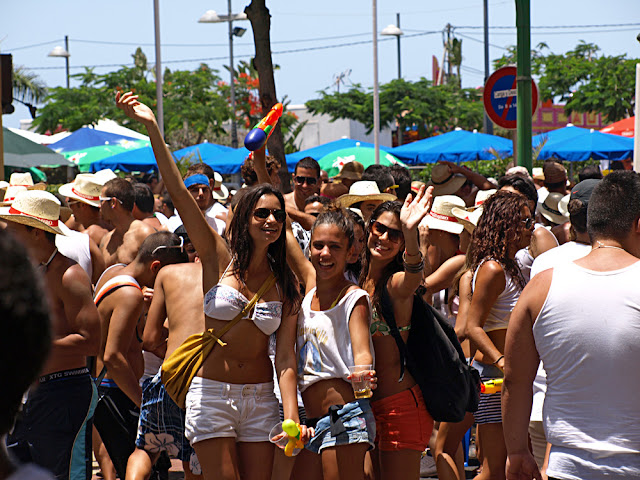 The total cost is €200 to include 5 full days of activities. Participants must arrange their own transport to Tenerife and accommodation too, which can be done according to their budget and time requirements. Food and drink is not included in this price, and there will some communal dinners and explorations of Tenerife’s nightlife though these will take expense into account. The maximum number of participants is 8. 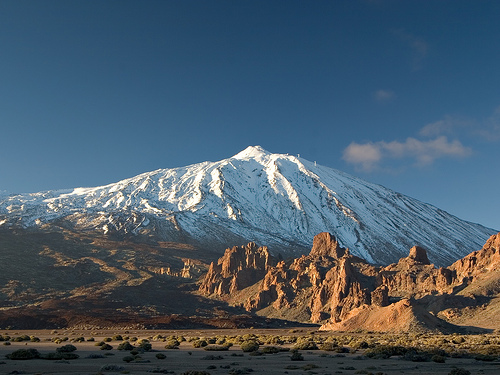 The Expanded Tourism activities originate in art and performance exercises but they are suitable for anyone with a sense of adventure, curiosity and willingness to try. The group’s language will be English and some basic level of proficiency is required. 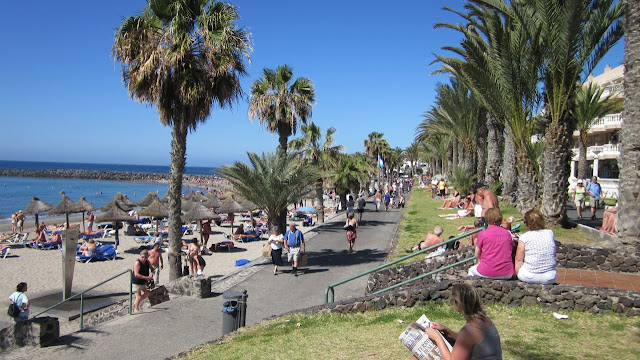 Enquiries and bookings: info (at) billaitchison.co.uk

Bill Aitchison is a performance artist who specialises in making critically acclaimed alternative tours that re-imagine places. He has shown his performances, videos, photos and audio works widely in theatres, galleries, museums and festival in Europe, Asia, The Middle East and North America, is published and translated in a number of languages and has worked for radio. He has a PhD from Goldsmiths College and is an associate research fellow at Birkbeck College, University of London. www.billaitchison.co.uk

The Taipei City Government Tour: a robot is haunting Taipei

There's nothing like setting off on an unusual mission, in an unfamiliar city, in a country you've never been to before. It was with this spirit of embracing the unknown that I set out to make an exploration of Taipei using Drift, an app designed to assist you in getting lost. 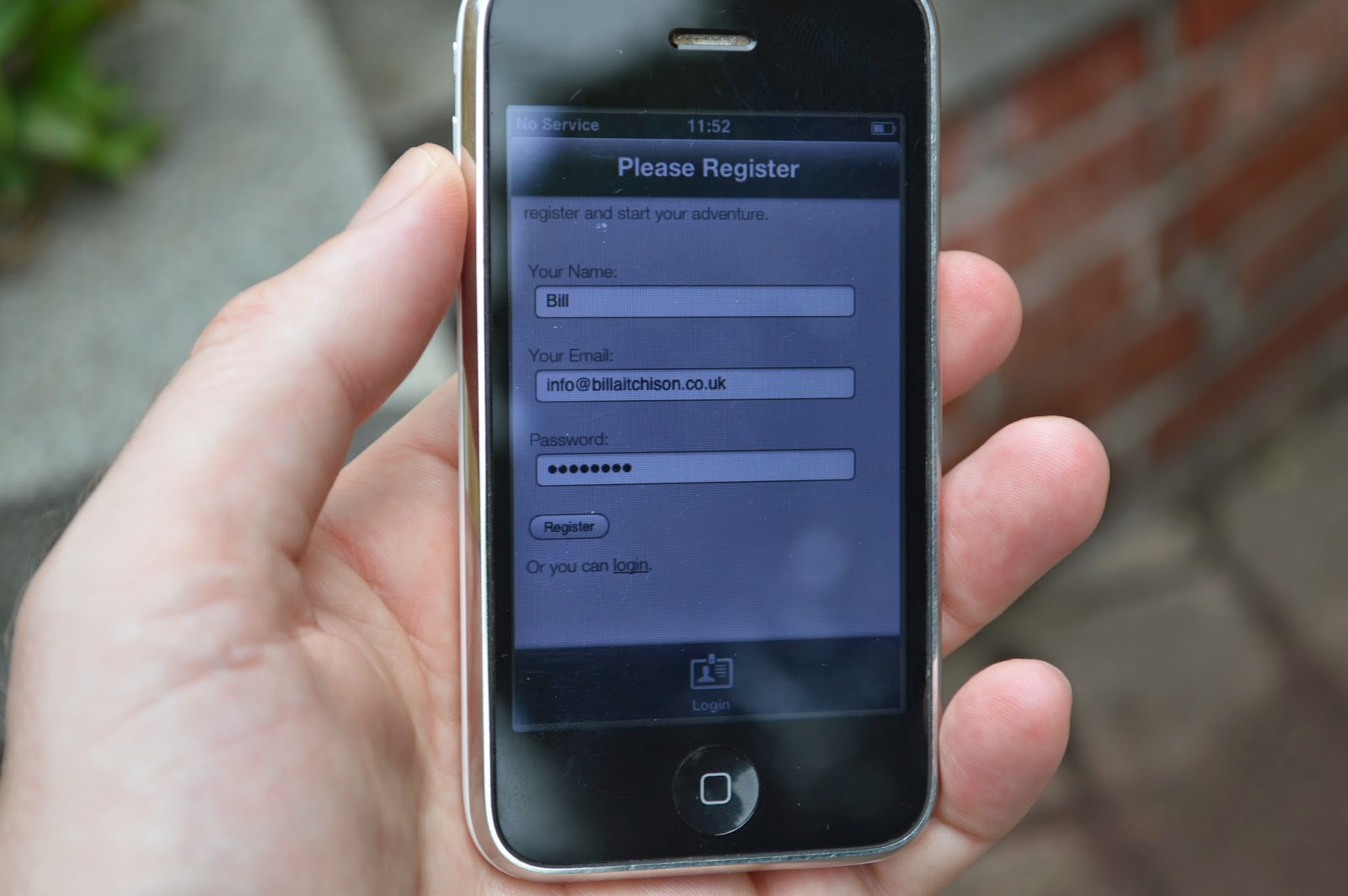 The day had other plans for me. I had to enter some information and was then asked to register. Being in a place where I don't have a data-plan, indeed where my regular phone wasn't working at all, this was not going to happen. Taipei City Centre does have a free Wifi service but you need a Taiwanese phone to access it or else a number from one of the ten listed countries, a list that includes neither the UK nor China. 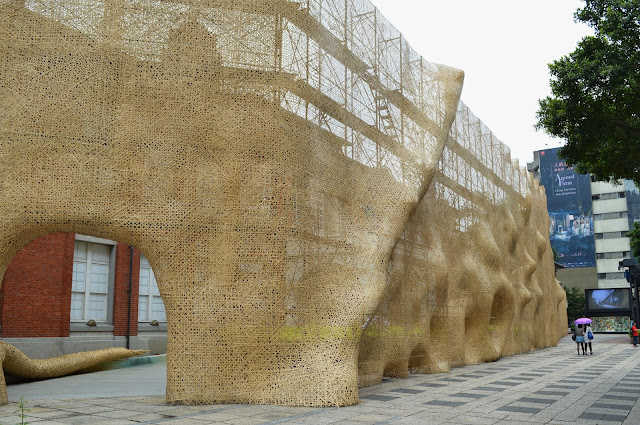 Dis-connected but still with a desire to explore, I set off from the bamboo clad Museum of Contemporary Art. Rather than deciding in advance where to go, what to look for or how to  go about doing this, I just started walking so that I'd gain some momentum. 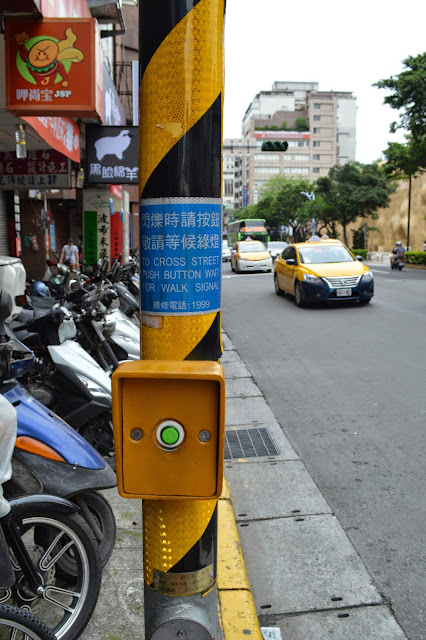 I went to cross the road and, as I was waiting for the light to change, remembered what I had read about many traffic lights having no causal relationship between the pushing of the button and the traffic stopping. You press the button and, because the lights operate on a fixed cycle, it changes nothing except it now displays a red light telling you to wait. I find this use of placebo buttons annoying as it betrays a condescending attitude to the the pedestrian and only encourages in me the very thing they try to suppress: the very natural instinct to jaywalk. I crossed the road. 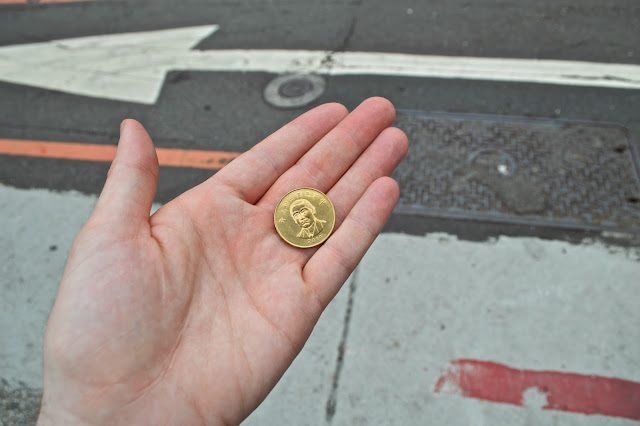 With no app to guide me, I tried a time-tested strategy instead: I pulled out a coin and decided to let it decide which way I should walk at each junction. A head and I'd turn right and a tail would spin me to the left. Setting off in this way I realised I had downloaded the Taipei City Government's Audio Tour and so I began listening to it as I slowly navigated my way around the city centre. 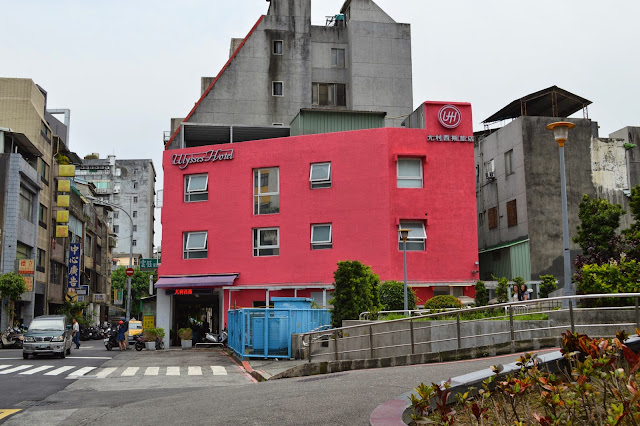 The recordings are, quite frankly, unlistenable. The woman narrating them sounds one step away from a computer-generated voice and to make matters worse, infuriatingly cheerful plastic music accompanies her robot-like voice. It's the sort of well-made trash you might expect to come across on a hard-sell corporate video but voluntarily listening to it is not something I'd recommend to anyone. For the purposes of the tour, however, I subjected myself to it, and, an hour later when she/it finally stopped, I was none the wiser. My head beaten into submission, I came to Ulysses Hotel which set me off thinking I really should reread the novel as it can be understood as the record of a day walking around Dublin. 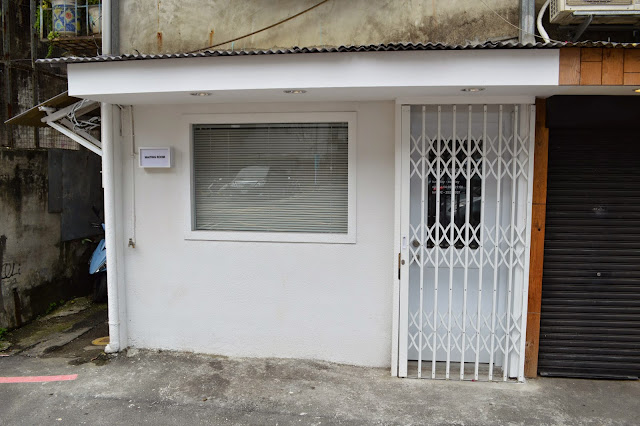 The coins had a habit of creating their own story. I came to this enigmatic white building bearing the sign 'WAITING ROOM'. The place gave nothing much away: it was not obviously a gallery and, whatever it was, it was shut so I had to stand outside and dutifully wait during which time nothing very much happened. The waiting, the blank time, was the point of it, I guess. To compound this, I set off and the coins took me in a circle right back to the WAITING ROOM, however this time round, a woman had emerged from a building opposite and was burning ceremonial paper money, the type that gets burned in the belief that it can help deceased family members in their afterlife. I then imagined some grandpa in the next life gratefully receiving this money and using it to buy things. 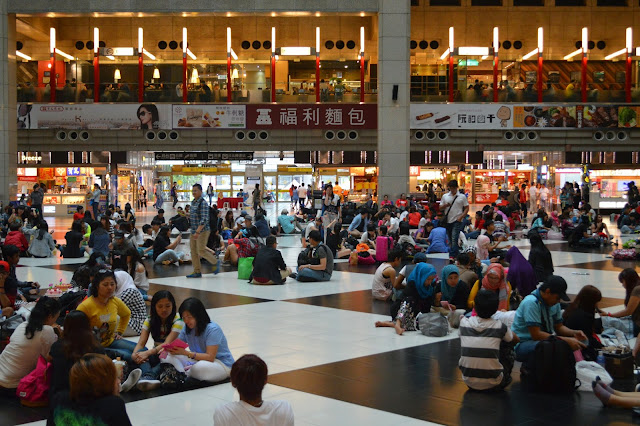 Who knows, if the next world is a mirror image of this one then this grandpa may have used the money to buy a train ticket in the Taipei Central Train Station, where a large number of people were sat directly on the floor WAITING. 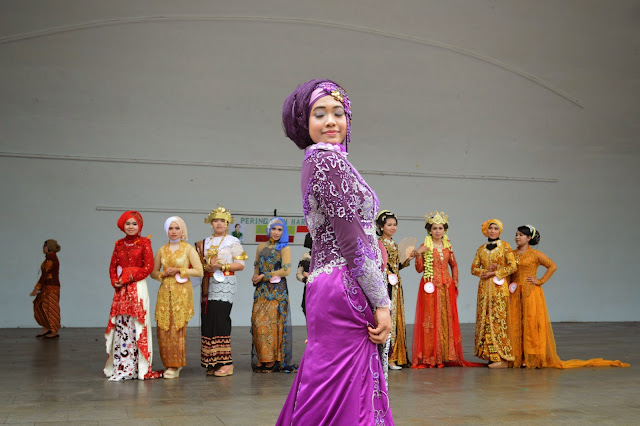 I zig-zagged a path through the city and stumbled across an Indonesian fashion show on a large open-air stage at the back of the Taiwan National Museum that seemed mostly of interest to a small audience of Indonesians. I'm not entirely convinced that this sort of display of traditional costumes exactly works as a fashion show, this looked to me more a cultural identity gig. That said, for all I know this might be a radical departure for Indonesian fashion. A slim man, also in traditional costume, stood at the side of the stage and intoned into a microphone over a gamelan soundtrack. He introduced each of the models and the only thing I could make out was that each introduction finished with a flourish and the word, "Indonesia!" 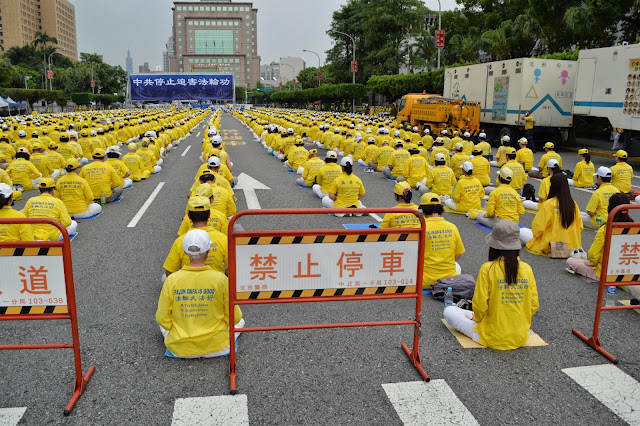 Continuing through the city centre, I came across a Falun Gong manifestation. The last time I saw them was when taking a tour around Bath City Centre where they play the part of the oppressed. Here it was a different story. The most striking thing about it was being in the presence of so many people in a deep consuming silence. I heard birds for the first and last time this day. 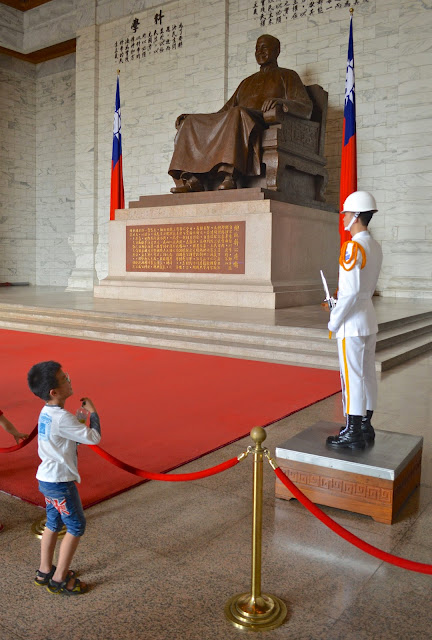 It was inevitable that I should pay a visit to the Chiang Kai Shek Memorial, it is a part of the audio tour after all. Walking around the imposing architecture, the robot voice came back to remind me who the bronze figure was and somehow made his achievements sound less than what they really were. That didn't stop the question of national identity from being very present however, this was a constant theme I kept encountering during my tour and stay in Taipei as a whole. I found it curious how much people wanted to stress how Taiwan was completely unlike mainland China, and while yes it was clearly more clean, wealthy and orderly, it also seemed to me more similar than different. On the other hand, looking at this young boy gazing up at the motionless guard in the presence of the elder statesman I thought about what my Taiwanese hosts had told me earlier, namely that they had grown up all their lives in Taiwan and felt no connection at all to the mainland which they were more than a little wary of. How this unfinished story of nationhood will unfold in this boy's lifetime is hard to predict and this sense of the uncertainty seemed to me a feature of this city that took solace by embracing its present. 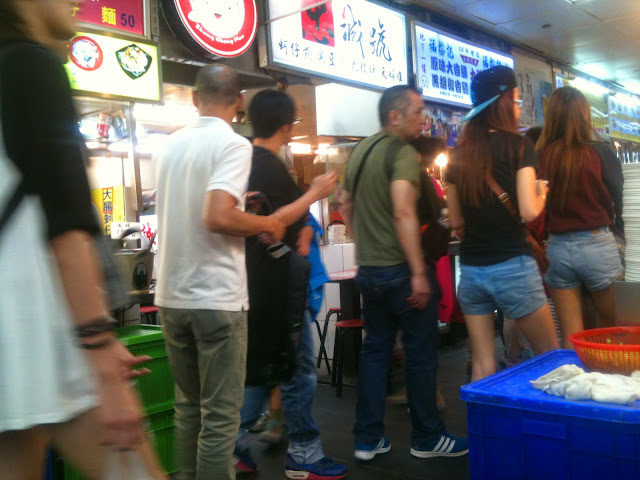 The day wore on and I knew I would be neglecting my tourist duties if I did not follow conventional wisdom and head to a night market. It was almost precisely what I imagined it would be: an oversized, noisy, leisure shopping hub teeming with neon food stalls and fashion accessories. In a sense then, it did not disappoint. 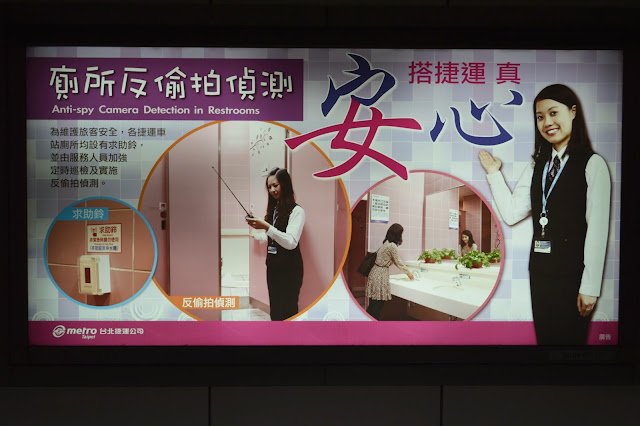 Returning back to my temporary accommodation I took the metro and as I was constructing my narrative about the city, namely that it aspires to be bland but actually manages to be quite interesting, I noticed this 'only in Taipei' advert on the Metro: anti-spy camera detection in restrooms. Seeing as I have never seen this sort of advert anywhere else in the world it made me wonder if Taipei had a particular problem with perverts placing concealed cameras in toilets and then uploading their videos of ladies on the job onto the internet. I guess that is a question I will probably never find the answer to but, rest assured, at least if you use the Taipei Metro restrooms you will, probably, be safe from electronic eyes.
Posted by Bill Aitchison at 16:09 3 comments:

There are some tour events coming up that I'd like to mention.

First of all, the London Tour is proving enduringly popular so it will return again on Thursday 11th June, starting at 7 PM from outside of Richmix London E1 6LA.


The following day, June 12th, I'll be participating in Bees in a Tin in Birmingham, giving a talk on alternative tours. This will also include a discussion and it is part of a larger day featuring a number of invited speakers who cover topics across the arts, science and technology.

Then, on 19th and 20th June I will be participating in the Performing Place 3 Symposium at the University of Chichester giving a presentation on The Tour of All Tours.

To finish off a tour rich June I will be presenting a new tour of tours in Berlin for B-Tour Festival in Berlin 26th and 27th June. The festival is devoted to artist-made tours of alternative varieties and is a quite ideal context to see the project in. If you are anywhere nearby, make a point of coming and see some of the other tours too; this is where it is happening!

July is set to be busy too with the premiere of a new tour performance in Amsterdam and in August it will be Edinburgh's turn. Hope to see you in one of these places.
Posted by Bill Aitchison at 16:18 1 comment: