The 42 km Tour aka The Xiamen Marathon 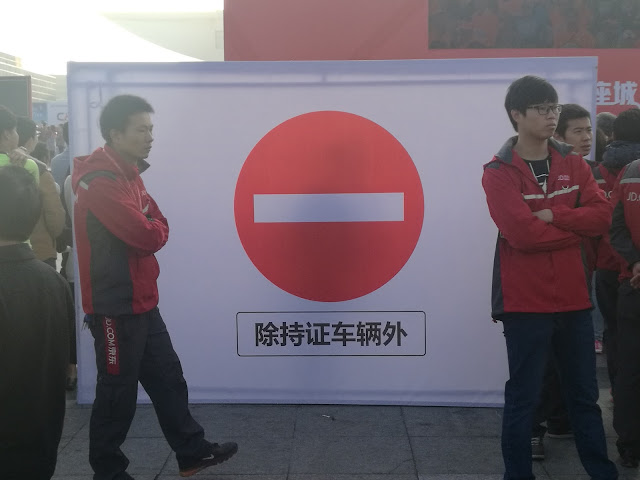 The 2nd of January was a big day for me. Some months earlier I had signed up for the Xiamen Marathon. I followed the instructions, arrived at 7.15 AM, only to be told I could not participate because I had not collected my race number. A trying-to-be-helpful but actually hopeless young lady in a reflective yellow jacket told me race numbers had to be collected the day before. This crucial detail was not included in the communications I received from the race organisers but was instead buried in their website's information on a not so very obvious page. My wife and I tried to get the race assistants to find a manager who could issue a number but the girl in yellow just gave us phone numbers which didn't respond except for one which someone picked up and then immediately slammed back down again. 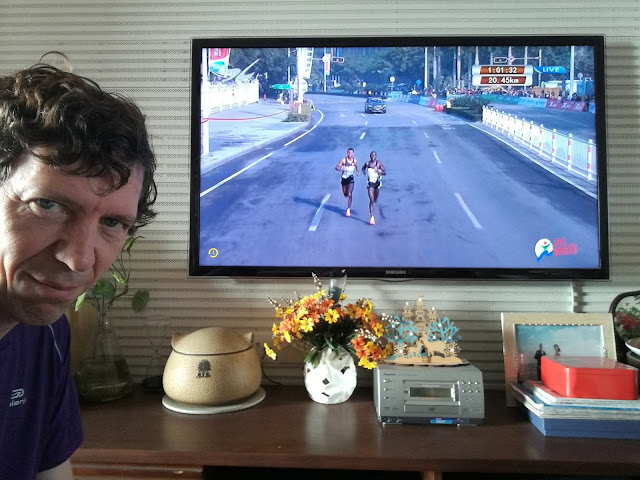 There was nothing for it but to go home and watch the race on TV. From this point of view, the marathon is basically a two-and-a half-hour tourism promotion. Once the pros had crossed the line and the Ethiopians collected their prize money, the TV coverage wrapped up. 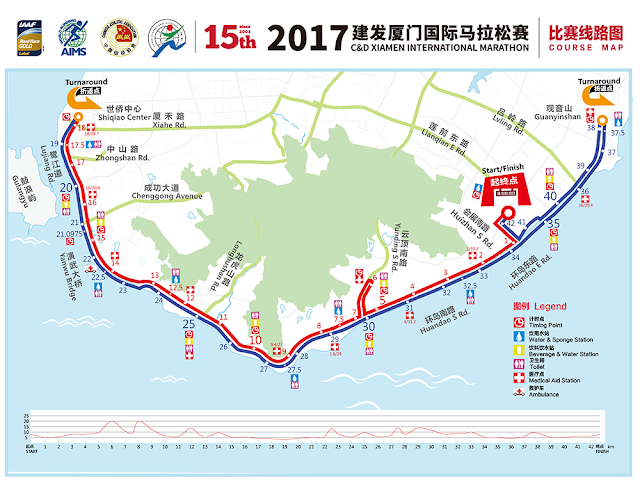 As I noted when reviewing The Tour of England, sporting events have become another way in which cities are made visible through a sort of tour. With that one, a small number of cyclists followed the route, a few more people lined their way and a considerably larger number of people watched them circle around the city on TV. I think it is very interesting how cameras construct a very selective live video portrait of the city, but what I miss in these TV tours is being inside of frame myself and having firsthand experience of the location. Reality is almost always much more diverse and ambiguous. That’s why the idea of running a marathon, rather than watching one, was so appealing. Well, that and I also wanted to get in shape. 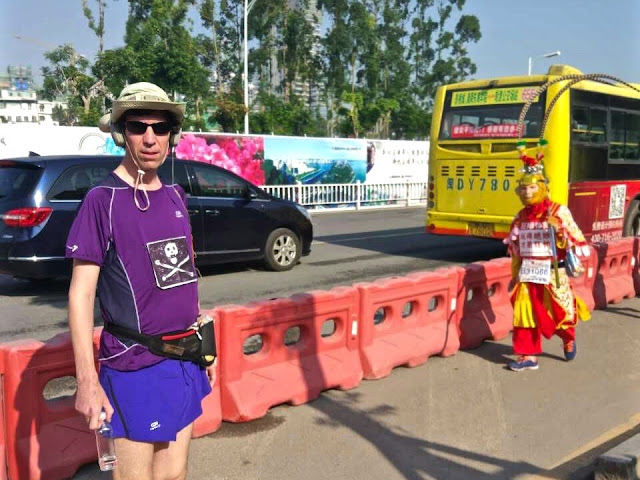 In place of the race number that had been denied me, I donned a pirate flag. I was not going to be running for the corporate sponsors like China Construction Bank and KFC, I was doing this for myself. I know that if I had not been denied a number I would have run the race anyhow, but I started to sense that being excluded was in fact not a bad thing; it alerted me to the true nature of the beast I was dealing with. Call it a stroke of luck or simply the power of self-justification, this race was taking an interesting new tack. I waited six and half hours till the last of the stragglers from the official race had groaned over the line then approached the exhibition centre where the action was. Coming towards me was a tired looking Monkey King. Very few Chinese runners have the gumption to dress up like this and I should admit I was impressed, particularly given the heat. I had been toying with dressing up too, but not being sure if I would complete all 42 km, I was reluctant to fail spectacularly in fancy dress. 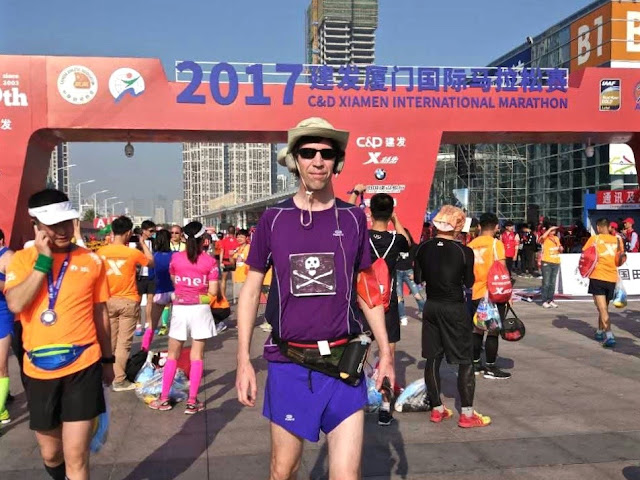 The starting point was now freely accessible so I took my mark and at 2.30 in the afternoon set off on this endurance tour. It was an extremely pleasant 24º C; pleasant if you were sitting in the shade sipping tea and eating watermelon, that is. For me it was anything but relaxing, it was sticky, humid and precisely the time of day I would normally avoid running in Xiamen. Never having gotten further than 22 km before, I knew I'd need to pace myself so I set off speed walking. 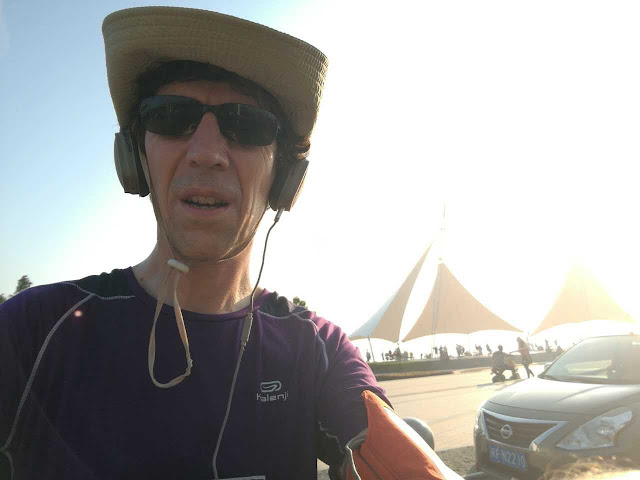 Since the roads were no longer blocked off for runners I pounded along the pavements and cycleways on the side of the ring road and must have been quite a sight: a lanky westerner wearing a pirate flag wiggling his bum furiously from side to side. Some people did take pictures and a bemused older man on a mountain bike followed me for a while. Mine was, however, a very solitary marathon, not the crowd experience of the morning. Perhaps because of this, I listened to music on headphones. At first I set my music library on shuffle which served up a hopelessly random selection of audio oddities many of which were slow melodic thinking stew or even worse, Chinese lessons and audio books. I was, however, prepared for what was to come and had downloaded the three CD album The Workout Mix (2011). In any other context this would have been downright painful to the ears but slogging round the sweaty Xiamen ring-road, this relentlessly upbeat electro-kitsch was exactly what I needed. 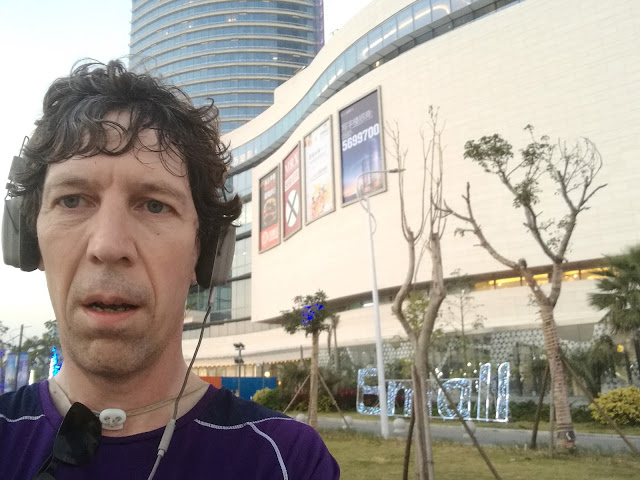 Even when I reached the insipid Emall, a long way short of the mid-point, my feet were already complaining. I had read that there are many things that can go wrong when doing marathons. I knew that for me the feet that were quite definitely my weakest link but there was no plan B, I simply had to endure the dull repetitive pain that grew with each kilometre. I dared not take off my shoes to see what the pain consisted of. One good look at that gore would have been the end of my race. 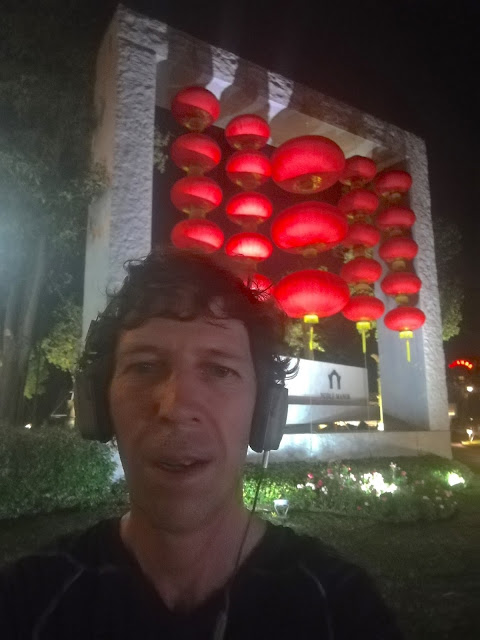 Making this very particular tour up and down the city's tourist coastline was a good opportunity to reflect upon the current transformation of Xiamen. When I first visited the city in 2010 it seemed much more beautiful than today. There was abundant nature bursting out at evert corner, threatening to reclaim this relaxed tea slurping city. But there has been a shift, maybe for older residents they'd say that already in 2010 that shift had already taken place. What was unmistakable was that the city was now being remade according to a much more intentional aesthetic. It looked like it was trying to style itself as a new Hong Kong or Singapore: high rise, malls and manicured nature. The irony here was that in doing so it was destroying the very thing that made it beautiful in the first place and turning itself into just another Chinese city, albeit one with better weather. 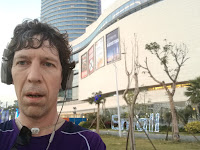 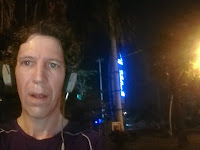 I like the comparison here between the battle hardened face at mid-point and the shell shock of the finishing line. My final time was far from heroic: just over five hours. Still, my sole ambition was to complete the 42 km and this now leaves me with something to improve upon. Crossing the deserted finishing line, littered with the detritus of corporate sponsorship, my immediate feeling was of defiance. The pirate held true! The message: don't let companies who don't care for you deny you of your dreams. 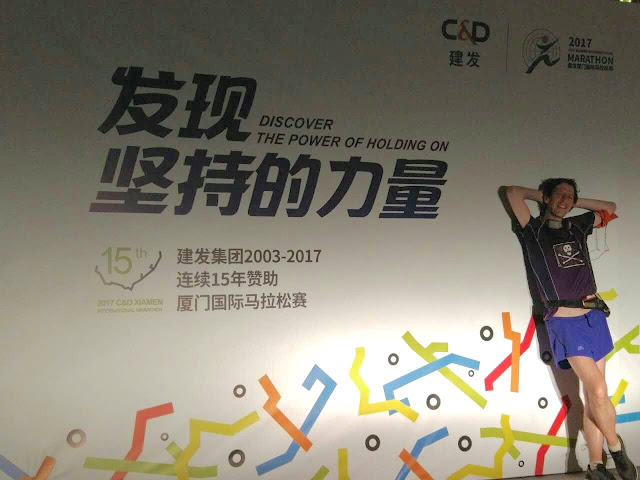 And here I am making my best efforts at an 'it was easy' smile. With distance, I can see that there are some aspects to marathons which, as a format, have made them become almost inherently corporate. Maybe other cities do a better line in them, I don't know. Not having run one before, I did not know what I was letting myself in for. I later learnt from several other people (Chinese and foreigners alike) that they had the same problem obtaining a number from Xiamen Marathon. The organisers just seem to be very poor at communicating and don't bother to improve as the race is heavily oversubscribed. You really are just a small cog in the wheel and the juggernaut keeps on rolling regardless of your experience. I did in fact ask their press office for comment but they, like all the other phone lines and emails, have also not replied. 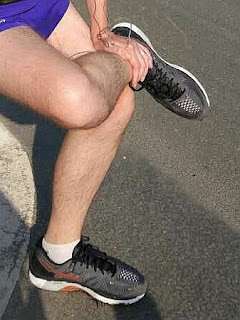 When I got home I gingerly peeled off my shoes. My long suffering feet were in a sorry shape. On the sides of the heels were white oversized blisters that looked like miniature pitta breads. My big toe was wrecked too, the next day the nail would go an unusual shade of blue. I cannot say for sure but my guess is that this is a result of fake shoes. I first tried on the shoes in a store and then, like the cheapskate I am, ordered the same pair from a Taobao seller. Either Asics are not all they are cracked up to be or I got a poor imitation, something that does happen in China. I have in any case learnt a lesson here about online shopping, and also another one about the nature of marathons, too. There is quite definitely a whole lot more to them than just an unreasonably long tour. They offer a window into the dynamics of the city and to your own, deteriorating state, over the course of 42 km.
Posted by Bill Aitchison at 13:03