The Genhe Tour: a journey to the coldest place in China

Out of the blue I received an invitation to participate in the Burnt By Snow festival, which was taking place over the soon approaching Christmas weekend. It was not entirely clear to me where this was happening but, since I didn't have any other Christmas plans, I said yes and then did my research. It was then that I realised it was to be held in Genhe, a small city in the far north of Inner Mongolia, close to the Russian border. 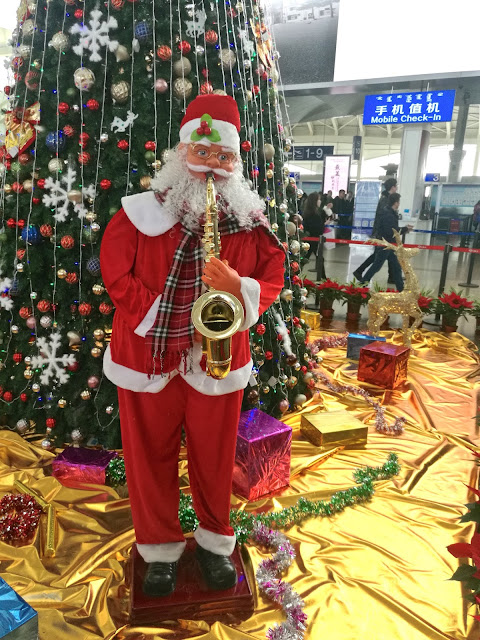 Getting there turned out to be quite an expedition in itself. From Xiamen in Southern China it would have been easier to get to Europe than to Genhe. The flight north was long and included stops and changes at each of which new people got on looking more and more seriously dressed for extreme weather. Never having flown along this central axis up through the heart of the country, I was keen to see the landscape from above but it was only when we got as far north as Shanxi that the clouds parted and the mountains below came into view. 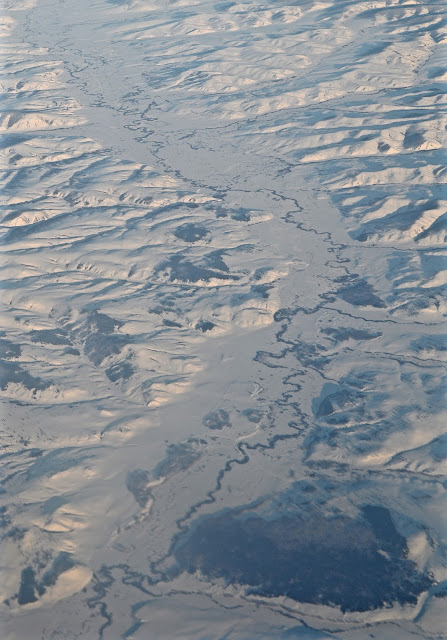 I have gazed down over Northern China many times from planes flying from Europe to Beijing and it has never failed to startle me how, in spite of the inhospitable landscape, people tenaciously cling on and make a life here. This is particularly true of Inner Mongolia where winter temperatures plummet to fantastically cold numbers that seem purely abstract. Stepping out of Hailaer airport and meeting the other artists who had come for the festival, the cold was no mere idea anymore, it was a slap-you-in-the-face concrete reality. It immediately woke me from the hours of transport lethargy and introduced a sense of urgency about wrapping any exposed flesh and moving on and out to Genhe. My now reddened cheeks tingled and went ever so slightly numb as if the dentist had missed the mouth and injected them by mistake. This was just the start; it was to get a good deal colder as we headed northwards up to the higher land around Genhe. 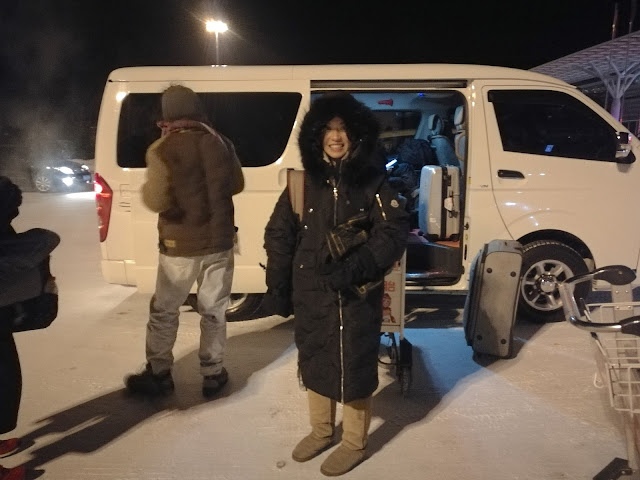 Bodies and bags were squeezed into the mini-bus, rearranged and then squeezed again to stuff every last cubic centimetre of space. The precision with which the driver staggered our entry into the vehicle, so that the baggage could be layered around and upon us, was impressive. As he was marshalling us I thought, I bet he was an expert at Rubik's Cube as a teenager. Packed like proverbial sardines then, we set out on the three-hour drive through the darkness to Genhe. 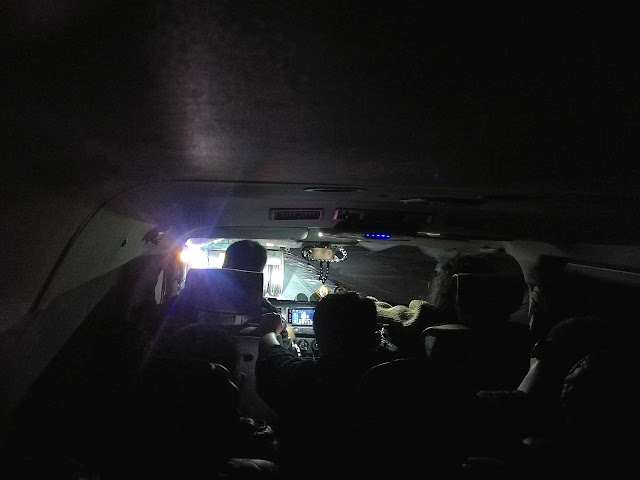 The main road between Hailaer and Genhe was little short of a disaster. The cold and ice had wrecked havoc upon the driving surface to the point that, in places, it was little more than a scree slope. On top of this, blocks of ice were strewn and once in a while almighty pot holes tossed the minibus one way and another. The windows were coated with a tough layer of ice on the inside of the vehicle and the long-suffering suspension sounded as if it might give up the ghost at any moment and abandon us to our fate. What should have been a three hour journey ended up taking four and half and, arriving in Genhe, I stepped out giddy as if I had been five rounds on a roller coaster blindfolded. 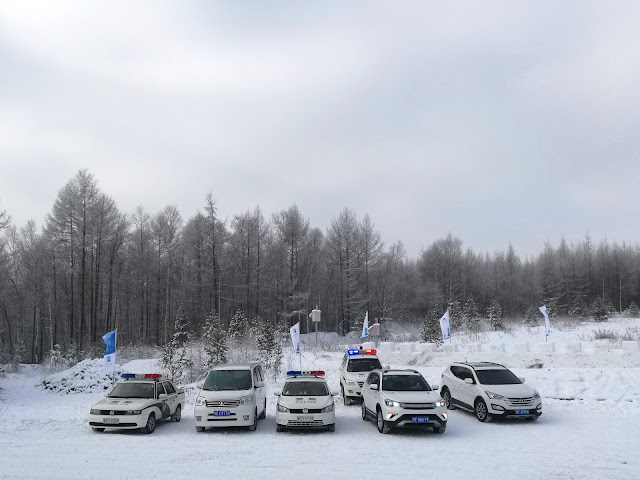 We had a day to settle into this iceberg of a city then, on Christmas morning amidst light snow that me feel like I was inside an ever so slightly dystopian snow globe souvenir, we drove out through the suburbs and on to China's Cold Pole. It turned out to be about an hour outside the city, on a hill surrounded by a birch forest where a team of police cars was waiting for us. It was a God-forsaken place in the middle of nowhere. I felt momentarily sorry for the policemen who had to sit and freeze in their cars and watch performance art but then, considering how the police have historically been so hostile to performance art in China, I thought there was a rough justice in this posting after all. Actually, this festival enjoyed an unusually positive relationship with the authorities; the local government even supported it, a very rare thing for performance art in China. 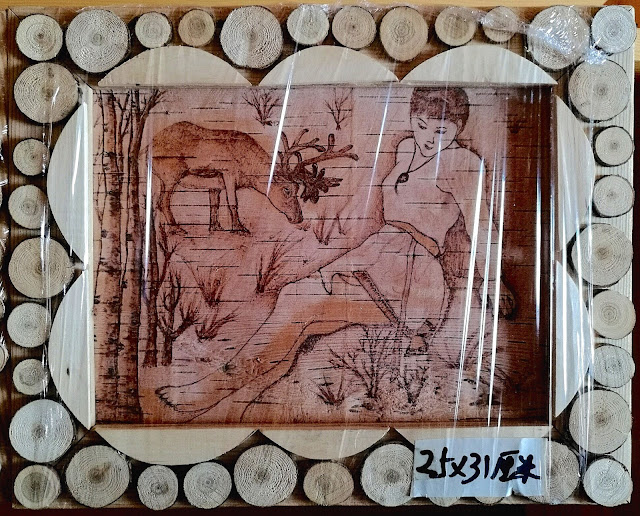 The Cold Pole may well have been stunning but I really couldn't tell as it was so cold I hopped around in the snow for five minutes trying to take it in then darted inside the gift shop. The shop sold local specialities and souvenirs that nobody seemed interested in but it was well heated so the place filled up. Soon enough the cigarettes came out and the room stank to high heaven of smoke, as indeed most of the restaurants we ate in during our stay in Inner Mongolia did, too. 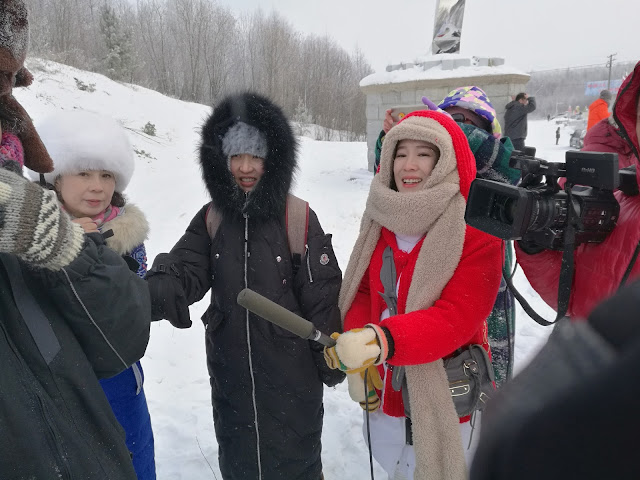 After some delays, the media crew and local government officials rolled up the hill and spilled out. The festival's curator, Yang Dezhong, gave the inaugural performance, followed by two Thai artists Aor Nopawan and Mongkil Plienbangchang, who must have been suffering having just flown in from a sultry 37º Bangkok. There was talk beforehand of people stripping off, nudity being a bit of a thing here apparently, but in the final event wisdom prevailed and the clothes stayed on. We were told to limit the duration of performances to ten minutes for safety reasons and that was pretty sound advice. The cold was such that every physical action they made in their performances was modified and approximated, lending the performances a rough urgency. Afterwards, their were interviews  and I was asked by CCTV to explain what performance art is. I fumbled an answer but I honestly think it is better not to ask what it is but rather to put that concern aside and instead ask, what did I just see, and how does it make me feel? It was too cold for such subtleties. 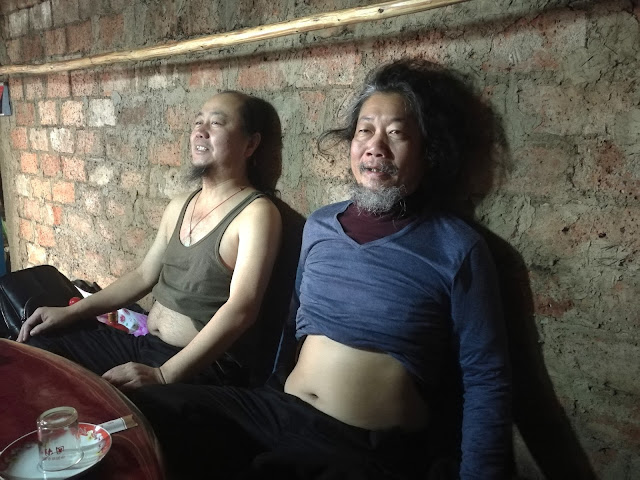 We then drove a short distance to an excellent local restaurant housed inside a log cabin. Through a combination of underfloor heating, big plates of food and blueberry alcohol served in teapots, we warmed up, relaxed and sang songs. This was so comfortable, in fact, that it was difficult to pull ourselves out of there and face the Siberian chill once again. Still, as the light was receding, we did just that and headed to a nearby riverbed for the next round of performances. 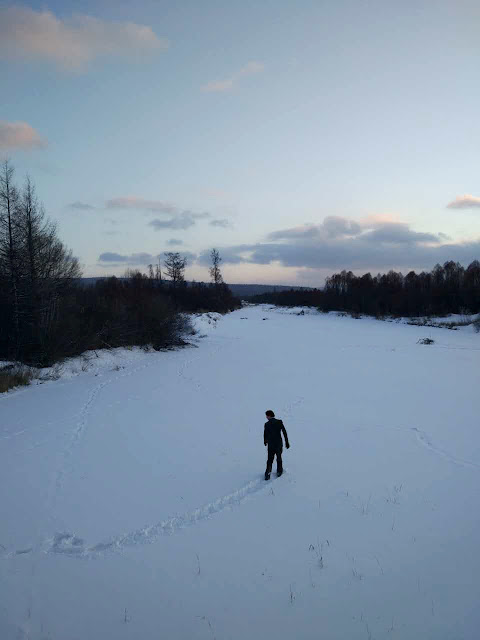 It was my turn now and I decided against leading a way-losing tour, or anything as rash as that, and instead traced out a short phrase in Chinese through walking slowly through the snow. This was inspired by the views of Inner Mongolia seen from a plane and from Chinese landscape paintings upon which there is usually an inscription. Mine, then, read like the title of a landscape ink and wash paining, "A Poet Walking in the Mountains". I concluded by walking into the distance, back towards the Cold Pole. The title of the work, Some Lines Written Above Genhe, is in reference to Wordsworth's Tintern Abbey and the tweed suit is my attempt to embody what poetry had become for me in the UK. Having been asked recently to record English poems for a Chinese newspaper I was surprised to find that I actually quite like Wordsworth, so this was not for me a wholly ironic gesture, it was more a suitably incongruous one. 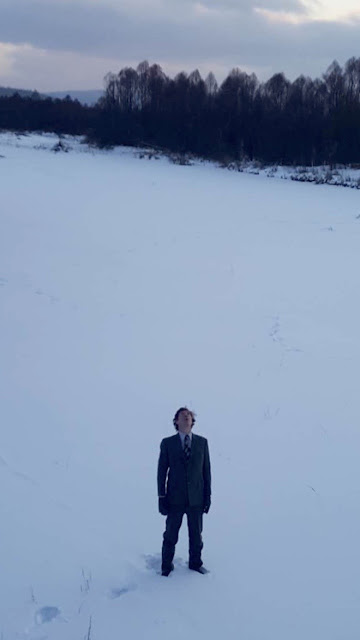 I later heard that a Mongolian woman who had been watching the performance asked, "is he connecting with the heavens?" She asked because this is something she said she could do. I gazed up at the sky for a length of time at both the beginning and end of the performance to put my actions into a relationship with my other self, who is more typically flying above the Genhe's of this world at 10,000 metres. While this might not have been connecting with the Gods in the way she practiced it, I had to ask myself whether maybe, through performance, I too was attempting in another way, to connect with the Gods.
Posted by Bill Aitchison at 00:45