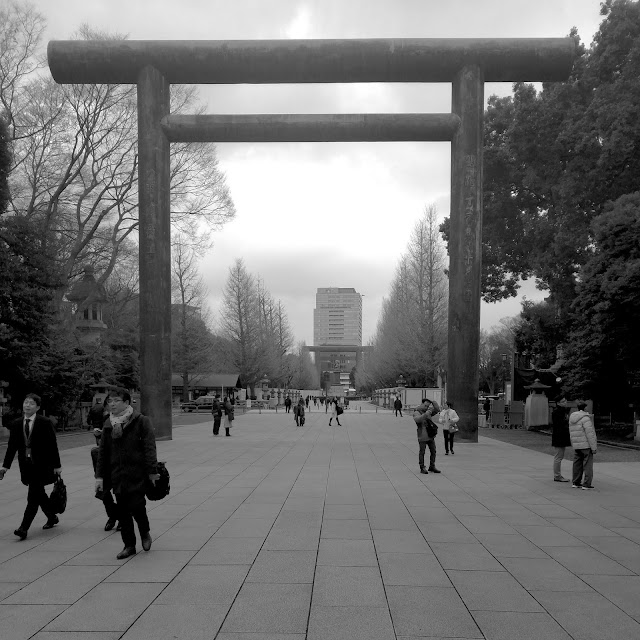 This Shinto Shrine, located in the centre of Tokyo, is a famous yet highly contentious dark tourism destination. It shot to prominence in 2013 when Japanese president Shinzo Abe visited it to pay respects to the country's war dead, which this site commemorates. Among those honoured are Class A war criminals. This broke international protocol and immediately provoked angry responses from China and Korea. 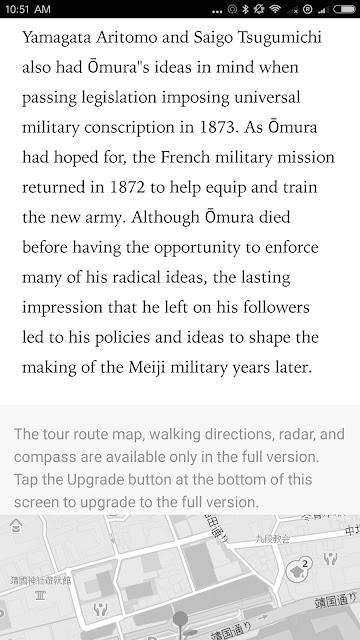 I had downloaded the app My GPS City which said it offered an audio tour of the shrine. It only featured short text entries for a handful of spots, the map didn't work and other functions were disabled too. It was, in effect, an advert for the real app and a waste of space on my phone. 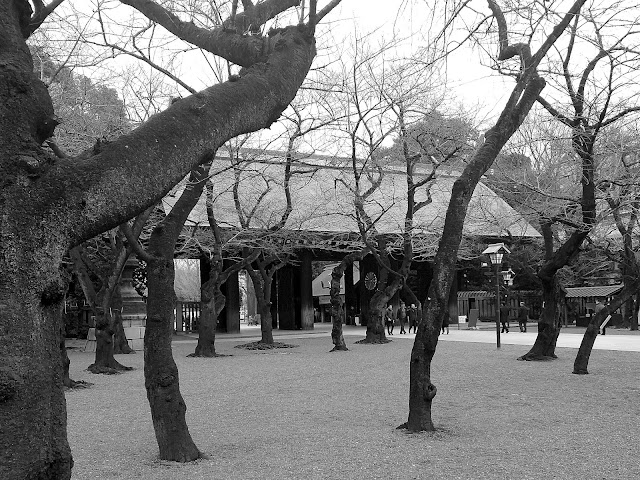 I picked up the paper guide provided by the shrine and wandered through the gnarled trees. A few things struck me. The shrine was established following a civil war during the Meiji era and later evolved into a national shrine commemorating losses against foreign nations. The names for wars were unfamiliar, there was "the China incident" and "the Greater East Asian War" AKA WW2. Additionally, the English is clumsily written and in need of a proofread. It is obvious no native speaker was ever let close to the text, which says something in itself. 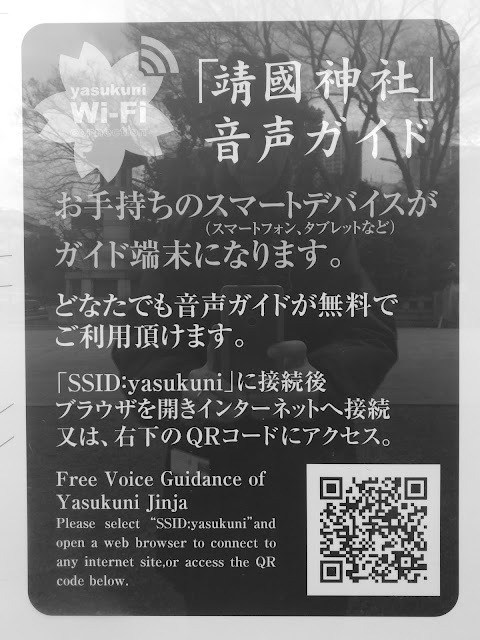 I came across this panel and immediately connected, eager to see if the audio guide would be as stiff as the brochure. Strangely, however, the audio would not load. I walked to several different corners of this expansive shrine, tried different pages and the Japanese site too, but this audio guide just wasn't happening. This struck me as profoundly odd as I had not experienced this sort of failure of technology before in Japan. This would be the last place I'd expect the technology to seize up so I could only guess there was something to do with the content or management behind the withdrawal of this service. 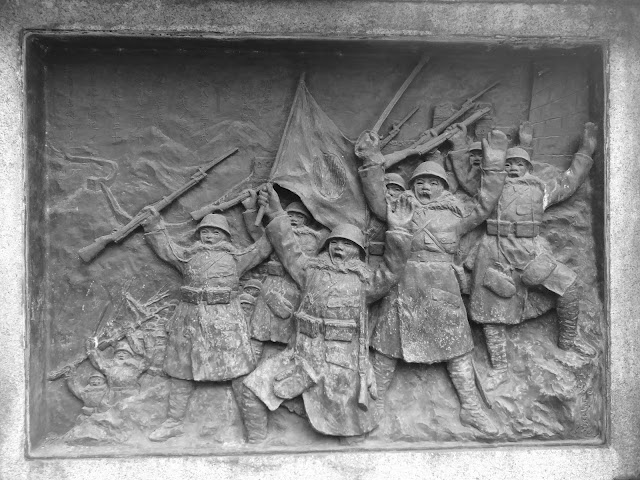 Nobody wanted to offer an audio guide then, so I meandered through taking in one "incident" after another. A number of the panels showed Japanese soldiers in China. 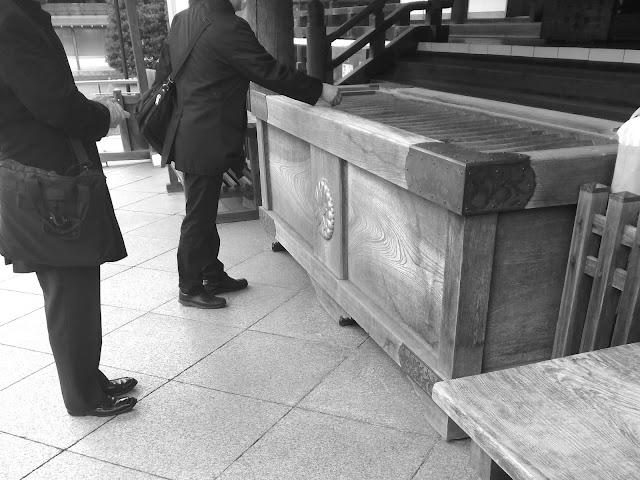 The other visitors to the shrine on this chilly February afternoon were mostly middle-aged Japanese men. There can be different motivations for coming to this site and not all who gather here will be right wing nationalists. What is striking, however, is the demographic portrait of the new right that Furuya Tsunehira paints in her article on cyber nationalists in Japan: it is precisely the same group. Contrary to what she asserts, I also got the impression during my two-week stay that they were not a spent force but were exercising growing political influence. An interesting thing she points out is that "history education in Japanese public schools is woefully inadequate, and instruction on modern and contemporary history is particularly sparse." 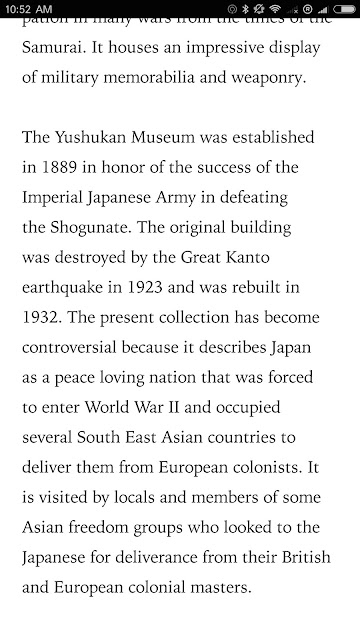 The version of history which pervades the shrine is one I heard echoes of during a talk a few days earlier that characterised Japan as a victim of the second world war. The shrine sets itself up to be a religious site that simply honours the fallen but it does so in such a way that it proposes a completely alternative narrative of the 20th century. The museum, which I did not visit, has been singled out by other visitors as particularly guilty of "a retelling of the war from the perspective of the ultra-right wing." I now regret being too tight to pay the 1000 yen entrance fee. 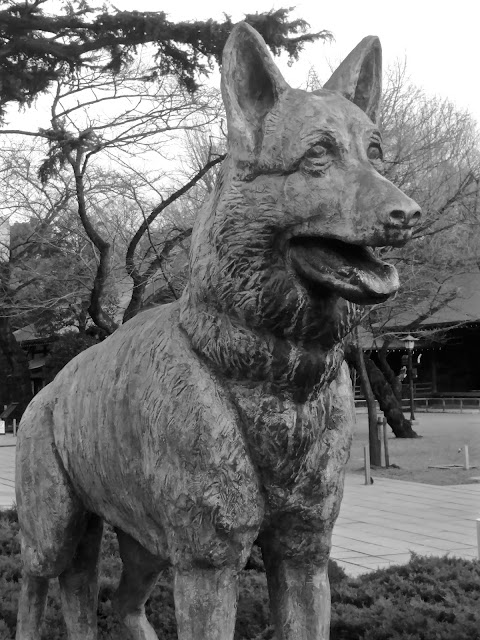 There were statues thoughtfully acknowledging the contributions animals made to 'preserving peace in the nation' or Japanese militarism, depending on your point of view. This got me thinking that, if animals' spirits are also enshrined here too, what is the limit of who is in and who is out? The dogs that died in the wars did not choose to have their spirits enshrined here anymore than the soldiers did, it was simply decided that they'd be honoured here. What if they don't want to be enshrined? Did they get a choice?

Then comes the question of the Canadian POWs who were used as slave labour in Japan during the war and who died in their droves due to mistreatment and malnutrition. They too made the ultimate sacrifice in the service of the Japanese war effort, but I'd be surprised to find their spirits enshrined here, though I could be wrong. The section of the video around 1 hour 20 features the Yasukuni shrine and a Canadian survivor meeting Japanese veterans. The failure of their otherwise sound memory when it comes to the crucial details of war crimes is telling. 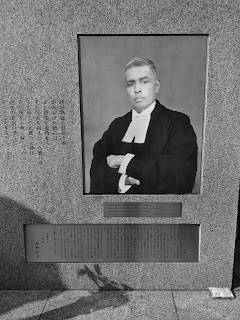 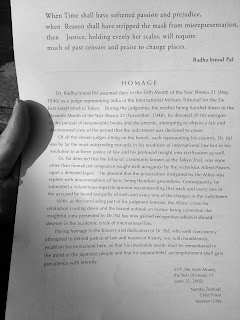 A special memorial had been put up for the Indian judge Dr Radha Pal who sat on the  Tokyo Trials of war criminals and who differed in his opinions to the rest of the panel of judges. The paper that is given out on this memorial is very selective in what it takes from Pal and never mentions things like, "Pal never questioned whether atrocities were committed by Japan at Nanking, he just suspected that the accounts included exaggeration." This would put him in the camp of those who downplay the Nanjing Massacre not those who outright deny it like Toshio Motoya, owner of APA Hotels (a major Japanese hotel chain). Pal's stance may be seen within the frame of Indian independence and his major point is that the justice that was administered was a victor's justice that ignored colonial grievances. 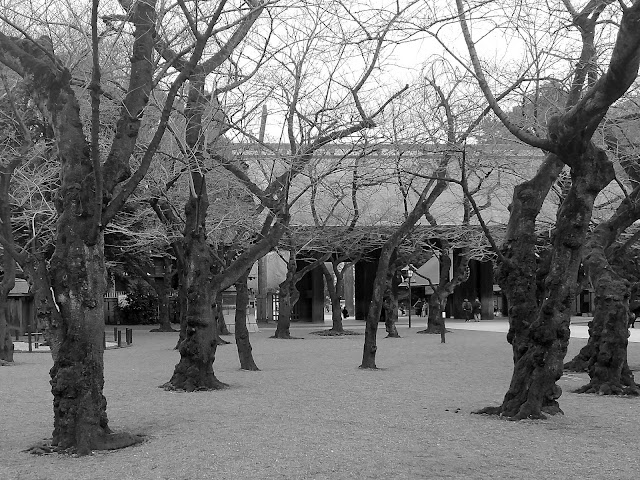 If I compare this site to the Imperial War Museum and Cenotaph in London, there are some similarities in that they both offer self-serving narratives of war and colonial expansion. There is also a religiosity to the latter site with severe sentences handed out for decidedly minor crimes committed there. These sort of sites have this tendency the world over. Where Yasukuni differs is the degree to which it has become embedded within political narratives as a result of the version of history that is projected here. For as long as the versions of history told in Japan and those relayed by its neighbours remain so far apart this site will remain a hot dark tourist site. This will almost certainly remain the case for some time to come as neighbouring narratives are not without their own self-serving particularities too. One just has to compare the Beijing and Taipei WW2 museums to see this most evidently. This is not inevitable; France and Germany managed to jointly produce a history book that is read in both countries. Reconciliation can happen when there is a desire to make it happen. Given the existence of shame cultures as opposed to guilt cultures in East Asia, however, this sort of joint initiative looks as far away as ever as it would entail considerable loss of face. Yasukuni will, therefore, remain divisive for many more years. I just wish they'd fix their audio guide so the full mendacity of it can be fully appreciated.
Posted by Bill Aitchison at 09:17