The Dublin Bus Tour: what sort of authenticity do you want? 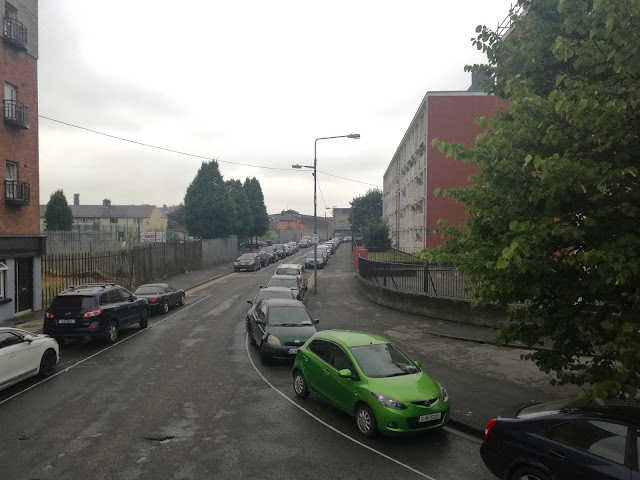 When I learnt that Dublin Cityscape offers a circular bus tour of the city that is almost half the price of their main competitor, I was immediately sold, which maybe earns me the title of Dublin Cheapskate. We piled aboard at St Patricks Cathedral and took to the top deck. This first part of the route turned out to be a particularly desolate stretch; public housing in a state of mild decay, empty plots abandoned to weeds and tedious corner shops selling a predictable arsenal of goods with which to assault body and mind. To compensate for this, the driver sang us a song about a fair Dublin lady. He sang like... a bus driver. 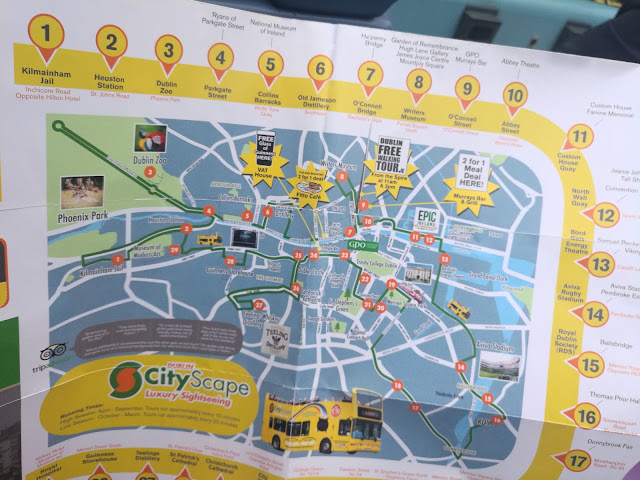 Here is the bus's route, shown in green, which sort of resembles a bug with two antenna pointing out to the left. There were some deals thrown in at stops along the way, one them being a €1 discount on entry to the rapidly approaching Guinness Storehouse. It was a little too early in the day and we were not even 30 minutes into this two and a half hour bus tour. Another time. 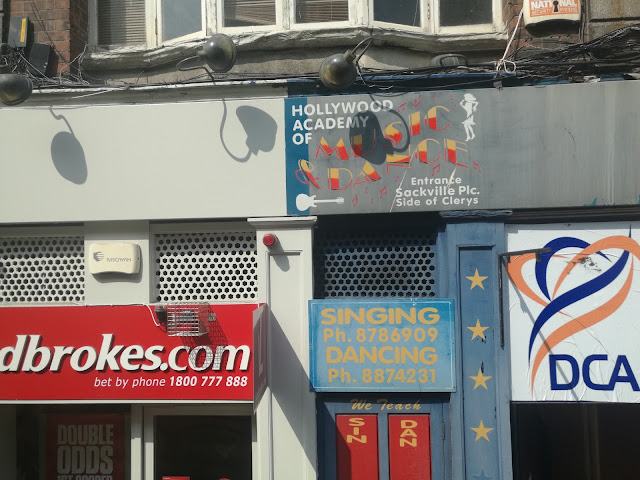 Viewed from the top deck of the bus, the city often appeared very ordinary; a mish-mash of unspectacular buildings hosting a chaotic assortment of business and people. There was no obvious magic, it looked much like a middling British city just about keeping its head above water. This first impression of Dublin lacking in style did change over time and once the eyes adjusted and I learnt more about the city's substance, the place grew on me. That process took more time than the two and half hours of the bus ride, however. Because this was a relatively long tour that included more than a few B-list locations, it inevitably showed a more flat and realistic portrait of the city. 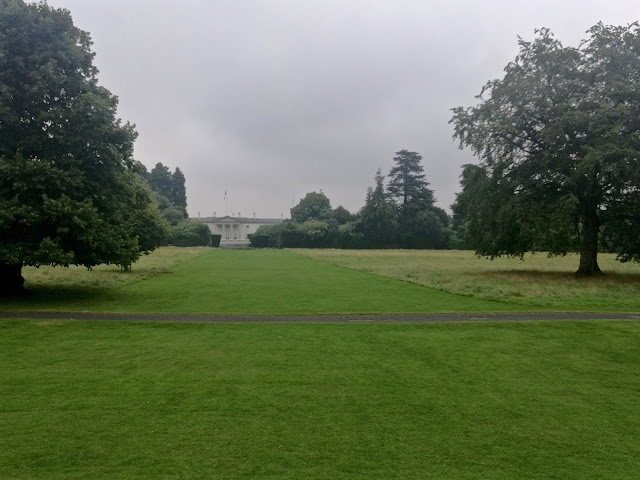 It would be unfair to say that the tour was uniformly mundane, however, it did also include the formal side of the city such as the official residence of the president, even if it was only seen from afar. The driver's stories and jokes were considerably better than his singling and he did include a joke about the building's current resident, the diminutive Michael Higgins. 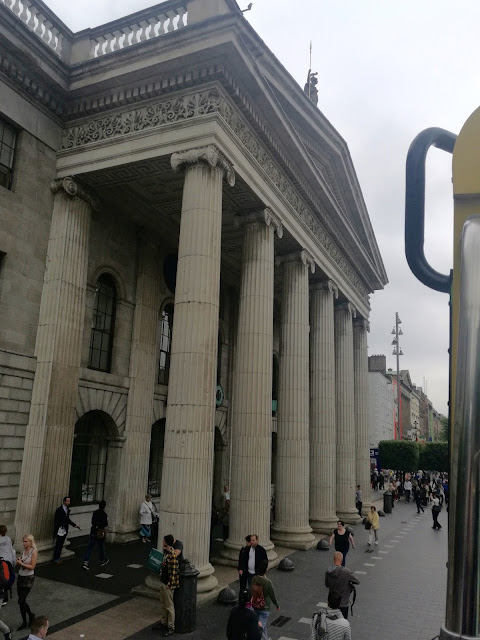 After what seemed like an age spinning around interminable suburbs, we finally came to the city centre. Actually, it was an age of driving up and down grey streets that was lightened up  with some creative nicknames for places and monuments, the best being "the floozie in the jacuzzi". The one topic he kept returning to was the Easter Rising of 1916 which lead to the country's subsequent independence. As this year marked the 100th anniversary of this event that was to become the modern state's foundation story, it was something very much in the air. The General Post Office played a central role in the rising and we heard much of the fate of the leaders, executed by the British Army. 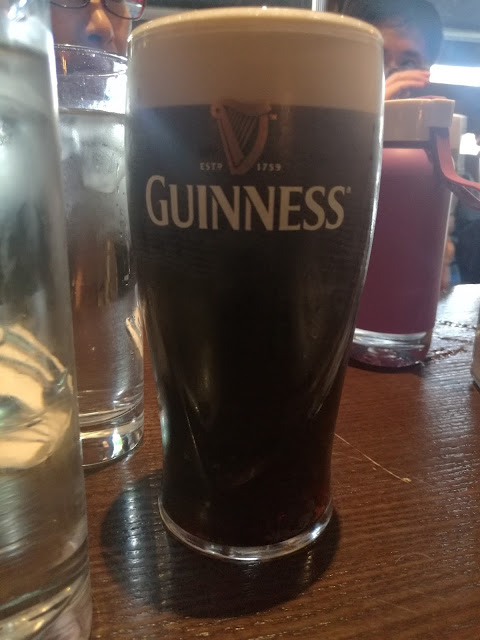 Time was ticking and we made a lunch stop to take advantage of a two for the price of one meal promotion that come with the tour. This was also the opportunity to try a drop of the iconic beverage and assert that it is much better drank locally. It was a fine pint but I must say I have also tasted great Guinness outside of Ireland. I rather think this aura of authenticity, drinking at the source, so to speak, is a little exaggerated. Yes I appreciate that the general standard is probably higher over here but there is also an element of exclusivity in saying you have travelled and sampled rather than just stumbling round the corner to your usual dumb local in Hounslow. Whether it be national pride or touristic kudos, there is every reason to continue to assert Guinness is better in Dublin because those who have not tried it are in no position to refute the claim. So I should rephrase my opinion: it was a superb pint, so much better than anything back home. 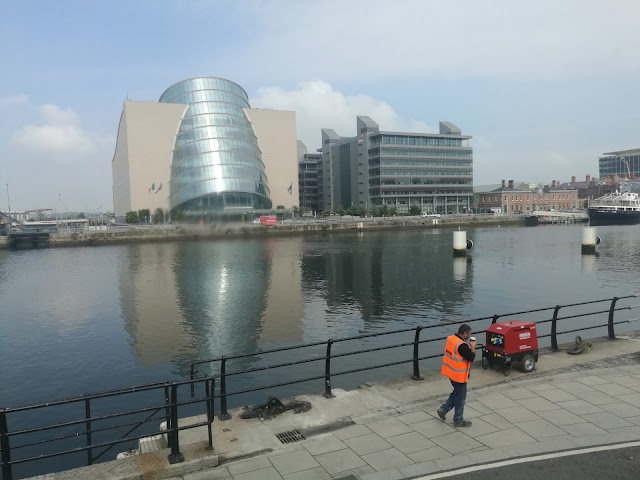 On the subject of beer, hopping abroad the service once again and driving on, our new driver pointed out the Dublin Convention Centre which, he said, looked like a giant can of beer being held to the mouth. If that is the product of an alcoholic imagination, I must also share one with him, it does fit. 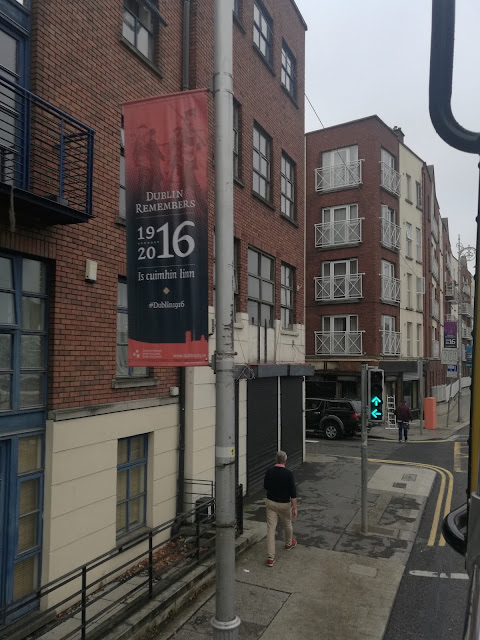 The new driver continued more or less where the old one left off with the Easter Uprising, a narrative that was reinforced everywhere I looked. I read an interesting article How does Dublin remember? that makes the point that the manner of the remembrance is very much a reflection of the contingencies of the present. Apparently, until quite recently, the 1916 guided tours where very niche and given almost exclusively to tourists. That has changed with the implementation of the peace process in the north and 1916 less associated with an ongoing armed conflict. A noticeable absence in the narrative, however, was the Irish Civil War which followed independence, as that, presumably, could still be divisive. The Ken Loach film The Wind That Shakes The Barley is set in that period and is centred around the question of, what sort of state were the Irish rebels fighting for. It's well worth watching if, like me, your history classes at school studiously ignored this important period of Irish and British history. Not the final word, but a good place to start. 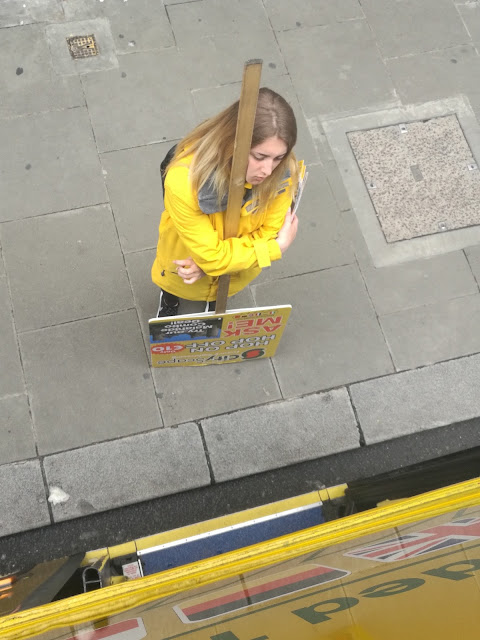 The day was wearing on and I spied one of the company's employees in the depths of a mid-afternoon lull. I remember that feeling only too well from countless summer jobs that were a character-building blot on my teenage years.

The bus stopped beside Trinity College and while waiting this song, And The Band Played Waltzing Matilda, played through the sound system. I heard it afresh and, for the first time,  made a connection between Irish soldiers (then part of the British army) fighting in the 1st World War and the battle for independence that had begun back home in Ireland. That is a connection not in the original song by Eric Bogle but is a new layer that comes out in this cover of it by The Dubliners. Ronnie Drew's voice is well-matched with this song and I'm guessing his is the voice that bus drivers aspire to, a seemingly artless art that is, of course, very difficult to actually produce.

And the old men march slowly, old bones stiff and sore. They're tired old heroes from a forgotten war.


And the young people ask, what are they marching for? And I ask myself the same question. 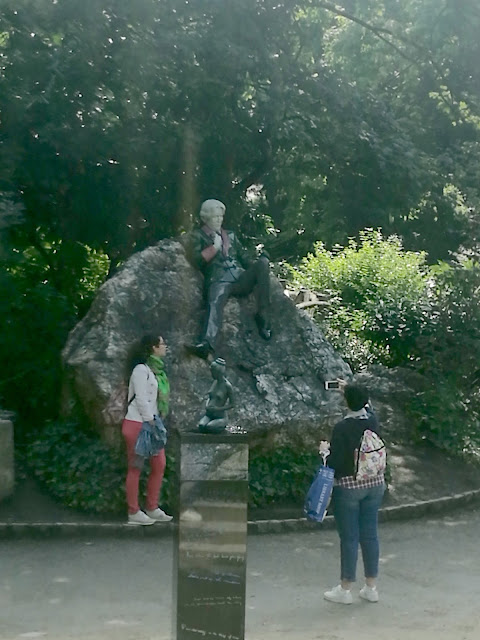 There is only so many hours you can spend viewing a new city from the top of a bus and it was high time to continue on foot. We pulled up beside a very louche statue of Oscar Wilde and shortly afterwards spilled out onto the street. The driver had mentioned the literary greats and how they were celebrated in the Dublin Writers Museum. When I stopped to think about it, however, they all left Dublin. I was already familiar with this phenomenon coming from the city of Portsmouth which tries to claim Charles Dickens and Sir Arthur Conan Doyle as its own on, I should add, considerably more tenuous grounds. Nonetheless, the fact that Wilde, Shaw, Joyce and Beckett all left the city in order to make their names, is not a side issue. For all the Bloom's Day celebrations that have become a part of the city's calendar, those who stayed and those who came are, I would suggest, the city's greatest literary heritage. 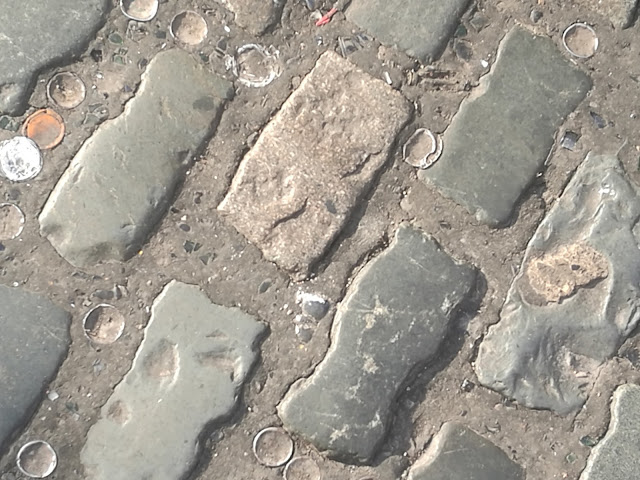 And so off the bus and into Temple Bar we strode where yet another version of the authentic Dublin was on display. I daresay if I lived in the city I'd avoid the area like the plague because of the tourists, junkies and high prices. That said, unattractive though it may be, it certainly was a spectacle and might well be, for many visitors, the city's definitive one. Which sort of authenticity did I want? All of them, I'd greedily assert, and more besides. Two days was not enough.
Posted by Bill Aitchison at 04:26