Red Tourism: how I got surrounded by the Red Army in Changting, China 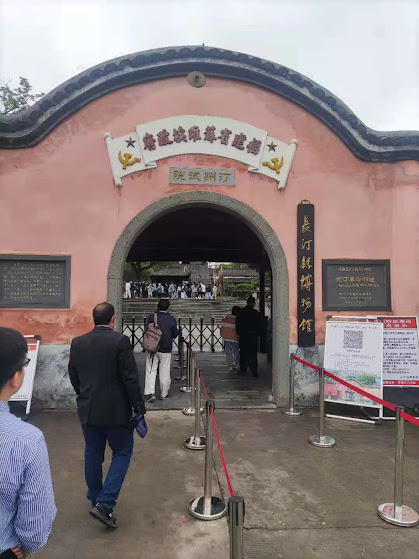 This place, officially known as the Former Site of the Soviet Government of Fujian Province,Red Tourist is a classic 'Red Tourist' attraction. That term really deserves a bit of explanation as, on the face of it, it sounds about as awkward as Marxist-Leninist Ice Cream. Basically, Chinese domestic tourism has taken off in a big way over the last 10 years and people now travel much more within the country than they ever did before. At the same time, the communist party has discovered that it can insert itself into this trend by creating sites that celebrate its history and amplify its ideology. This is such a site. 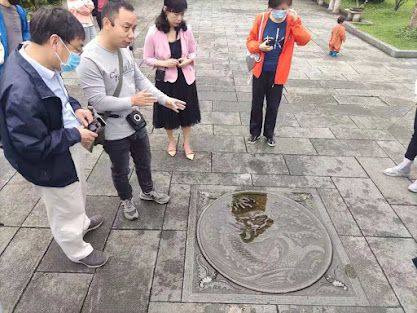 The town is clearly not used to foreign visitors and nor was the guide. He seemed friendly enough and we had a translator, but many of his points and stories just seemed to go nowhere as we had no context for them. What did slowly become clear was that we were visiting a historic site that at one time was a communist party centre. 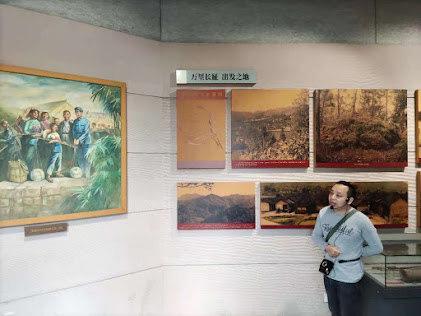 We were told that Zhou Enlai, Mao's long-term sideman, described Changting as Little Red Shanghai back in the early 30s when it was under communist control. The meaning here is that you could get anything in Changting that you could get in Shanghai and even more, so plentiful and rich was the town. I'm quite willing to believe it was a prosperous countryside town in the early thirties when it was incorporated into the Chinese Soviet Republic. How long that remained the case is a question and that it had everything Shanghai had and more, stretches credulity. This lead to two observations. The first is that this notion of it being better than Shanghai should be taken more on the level of propaganda, though that didn't stop one Chinese man on the coach repeating it like it was fact. The second is that the term soviet was used several times and when I asked whether and how much the Soviet Union were involved, the translator and guides did not answer the question. They pretended the question was something else or just flat ignored it.
Here, the guided recited the poetry of Mao in a deep and meaningful voice. This was a performance he obviously gave quite regularly and he looked a little bit pleased with it afterwards. The rehabilitation of Mao, who was at one point officially declared 70% good 30% bad, seems more or less complete. 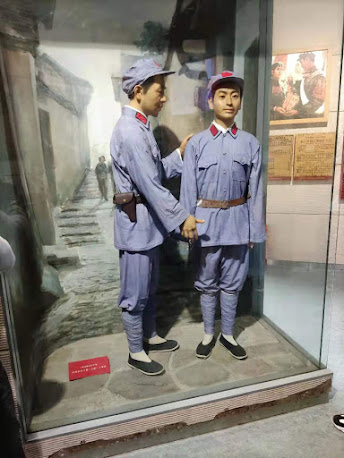 We were told about the many battle victories of the Red Army who were stationed and recruited in Changting in the early 30s but we were not told about their heavy defeat which precipitated the Long March. This form of history telling that only focusses on edifying episodes from the past can lead to the listeners coming to completely false impressions. I myself had to go and look up the history after this tour as it left far more questions than answers. Like with the other Changting tour I took, I have the feeling that the guides are not used to people asking questions or approaching their tour in a critical manner, so the many gaps in their narrative have never had to have been smoothed over. 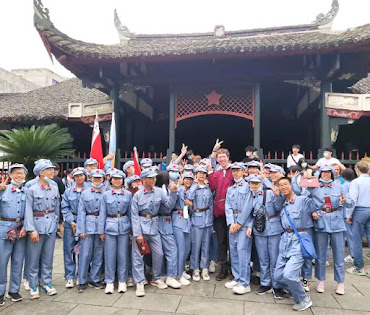 Outside it was the turn of the school groups: teenagers dressed up in red army uniform and sneakers. There were a number of such groups and they seemed to be the staple duty visitor on the morning I went. Each group had both their school teacher and a military person in charge of them. These trips are a form of day out for the local schools and they are justified as historical and ideological education. When the group spotted me they seemed to forget ideology for a moment and they swarmed over and wanted their photo taken with the tall westerner, somewhat to the annoyance of their military handler. One or two said, "Welcome to China" something I have not heard in a long time. This was when it truly struck me I was in the countryside where you get to play at being a minor celebrity just by being foreign. The kids were spontaneous and pretty friendly and I must admit finding myself to be the star attraction in a red tourist site made this visit an awful lot more fun.
Posted by Bill Aitchison at 15:28