The Roaming Through 40 Years of Shanghai Tour 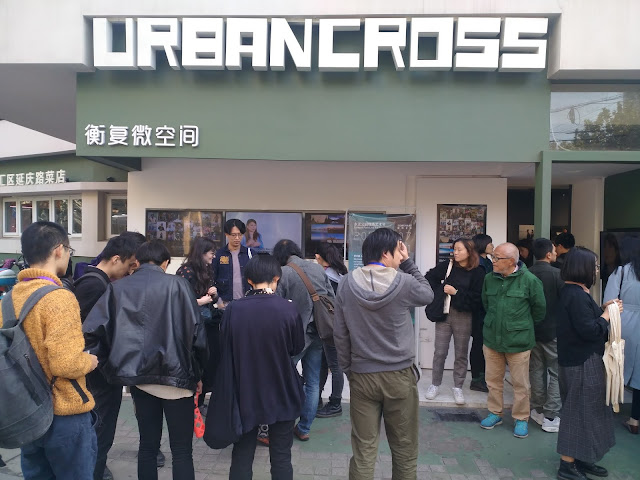 Today's tour had all the potential to be something rather special. It was a walking tour of the older part of the city centre with artist interventions. A collaboration between an art festival and a walking tour company. We gathered waiting for it to begin. 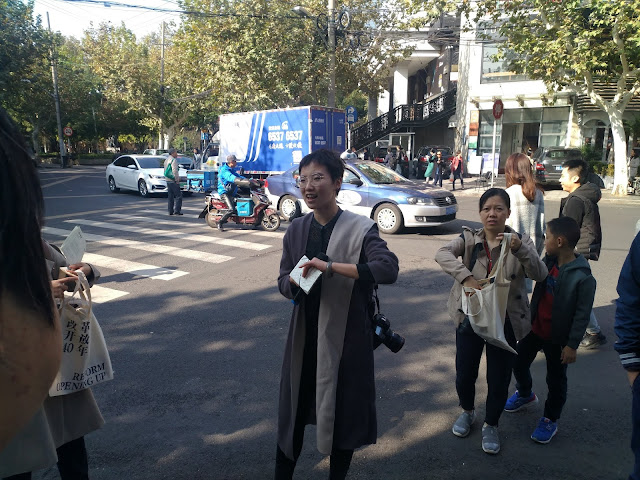 The tour was given in Chinese with no translation so I was a bit on the outside of it all. I got bits and pieces of it and actually that was enough to realise the sort of tour it was: an anecdotal historical building tour of the neighborhood. Even though there was enough space to gather everyone on the pavement, we still spilled out into the road, the guide included. 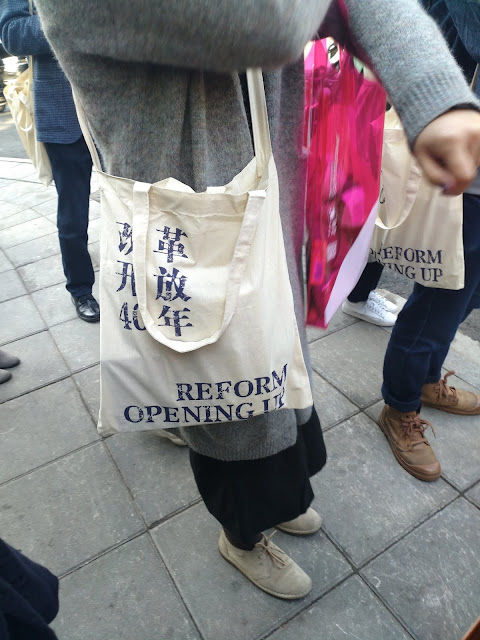 The ostensive theme of the tour was the last forty years of history - that is to say the period of opening up and reform of the Chinese economy - and how that is manifested in the local area. Normally forty years would not be enough to make something historical in the typical frame of the guided tour but given the pace of change in China and Shanghai in particular this could have been interesting, even if it is working to a government agenda. The reality was more loose and we stopped beside older buildings and talked about their histories quickly letting go of the economic reform theme. This turned into a tour of old buildings with stories connected to them, the standard fare of local history tours. 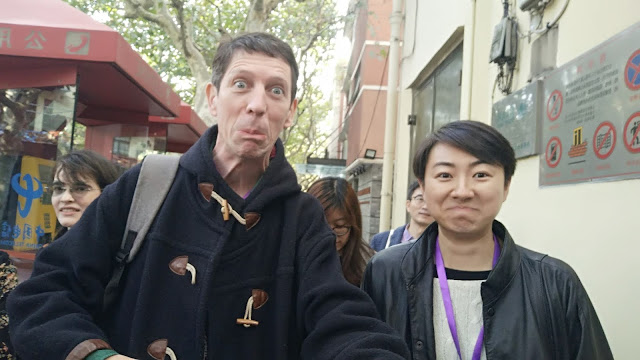 The public taking this tour was a mix of artists and a general public who were looking for a local history tour. It seemed as if the art interventions were not so welcome, finally. One of the group, July Yang, made a commentary performance while we were walking between stops and I later joined in, repeating the Chinese commentary imperfectly. When we arrived at the next stop we were asked to be quiet. 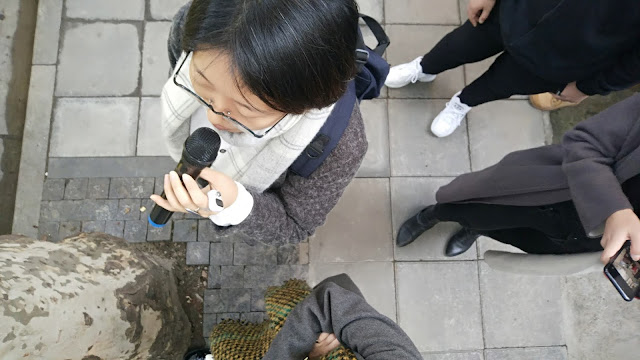 The guides used a microphone and portable speaker even though the road was not so loud and the group not so large. I felt this was more about establishing authority, though one of the ladies (there was a rotating cast of guides) probably did have a quiet voice. The stories were not particularly interesting and didn't connect to build into anything more than a series of curiosities. 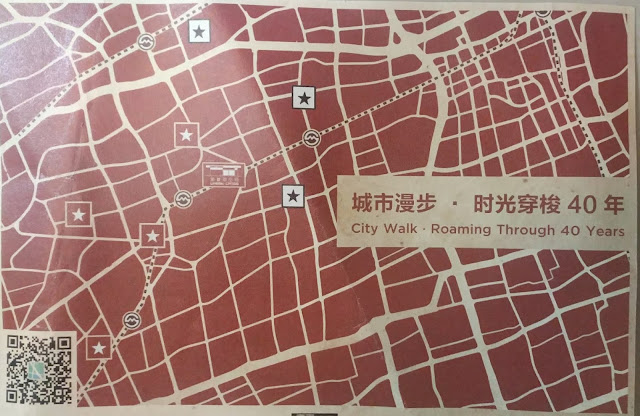 This got me thinking that, rather than choosing 40 years as a theme (and then breaking it) how about a much shorter time period? What if you were to give a tour of what has changed in a neighborhood over the last week? Immerse yourself in the contemporary and use that as the way to get to the story of what is happening. 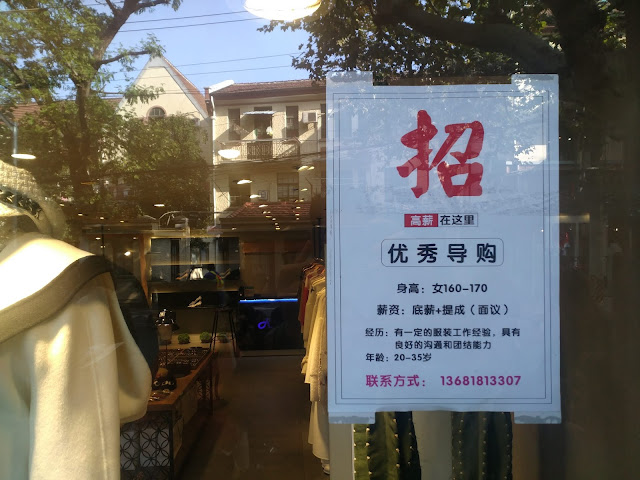 There were some things I noticed along the way such as this sign recruiting female staff of between 160-170 cm and 20-35 years of age. This seemed much more interesting to me than these disconnected stories, which, to make matters worse, did not even deal with the appearance and material qualities of the buildings very much. If a tour can make you see something afresh and then understand something from it then it has done something useful. This tour did nothing to alter our perception, the guide simply stood in front of the building and told a story about it. 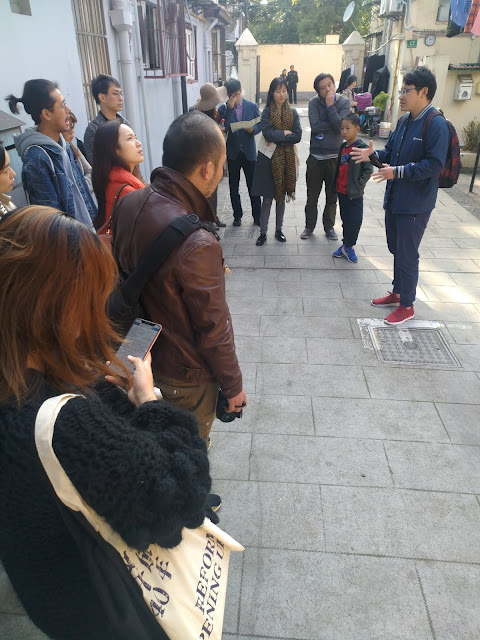 The weather was, however, very pleasant. It was great just to be outside on a mild autumn afternoon like this. 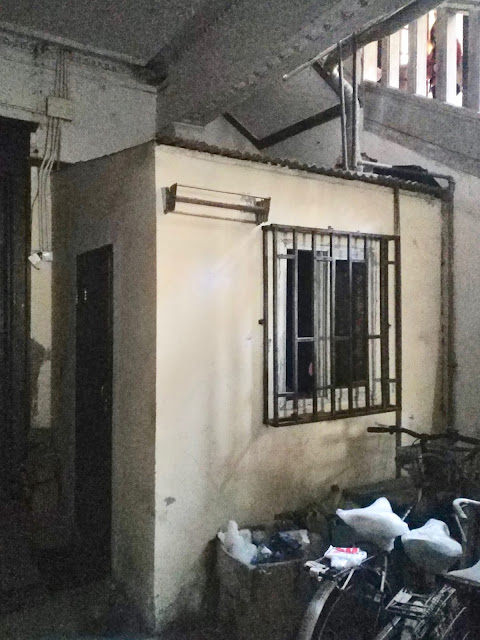 We entered a building and I was fascinated by this little room, which looks as if it is rouge construction added at a later date. This got me looking for quick-fixes, of which there were plenty, and then exploring the environment of the tour using different themes again. Rather than suffering the mediocre, it seemed much more fun to make something else out of the day. I didn't share this with the wider crowd, just one or two of the artists, as I could see that to do so would disrupt the plan in a way the local history guides were completely unprepared for. A tour with two guides could be good, but the two should agree some basic house rules in advance so that the tension can be a respectful and healthy one rather than an acrimonious one. This was not the occasion, but I should try to find the time to do just this. What would make it all the better would be to propose a route and let different people make their tours of it, then jam them together. That would be fun!
Posted by Bill Aitchison at 12:17