The Tour of Geyuan Garden: a heritage nightmare 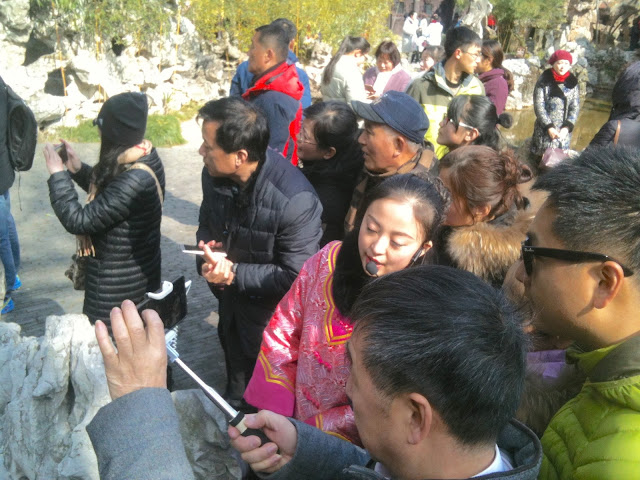 Geyuan Garden is, apparently, one of the four most prestigious gardens in the whole of China. I would never have guessed. Numbed from a 24-course Spring Festival feast the night before in which the baijiu toasting went on long and hard, I dragged my way around the residence and formal gardens. It was piercingly cold and despite the many layers I was bound up in, I was still freezing. I was here thanks to a family outing which I got hoovered up into and before even setting off I was saying to myself, this was an absurd moment to come sightseeing. It truly was, and yet so many did. 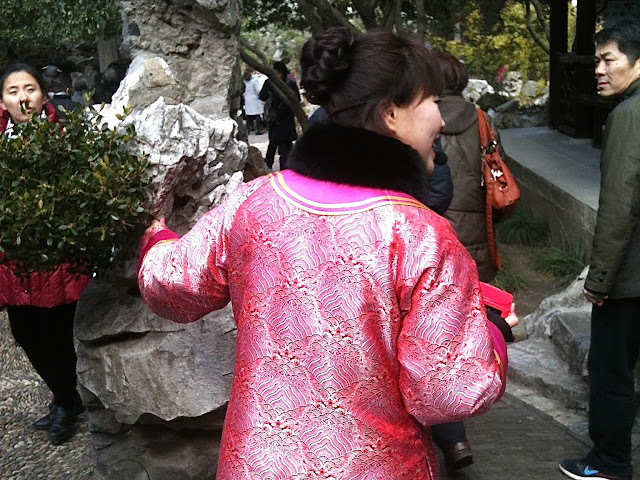 Rather than following any one single guide, the way this place seemed to work was that the place was flooded with so many guides you could hop on and off their tours and surf your own course around Geyuan. The guides all seemed to be women, mostly under thirty, wearing costumes that featured dashes of shocking pink. The look was of history tarted up according to the tastes of someone lacking in any deep sophistication. 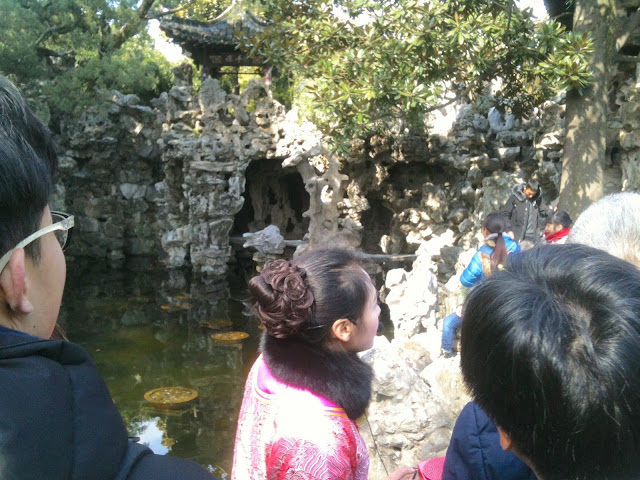 The guides congregated around the built up areas explaining thing like, who this was the former home of, or what that assemblages of stones meant. They looked like they were following a tight script and there were no questions except the obvious ones like, where are the toilets? And the most inevitable one of the lot, where is lunch? 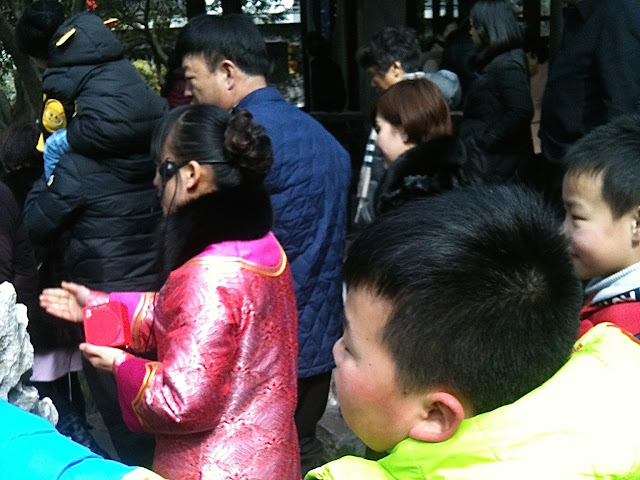 The crowds were nothing short of crazy. I am used to China, I've been here a while now and learnt how to switch off and find privacy in public, but this was something else. This was the third day of Spring Festival. There didn't seem to be any limit on the number of visitors, this was the moment for Geyuan to fill the coffers. The crowd was very accepting, however, sardine tourism probably came as no great surprise and most people simply made the best of it. The guides cranked up their microphones, great big bottlenecks swelled around gateways and some  boys got bored and ran wild: it was the usual low-level tourist chaos. 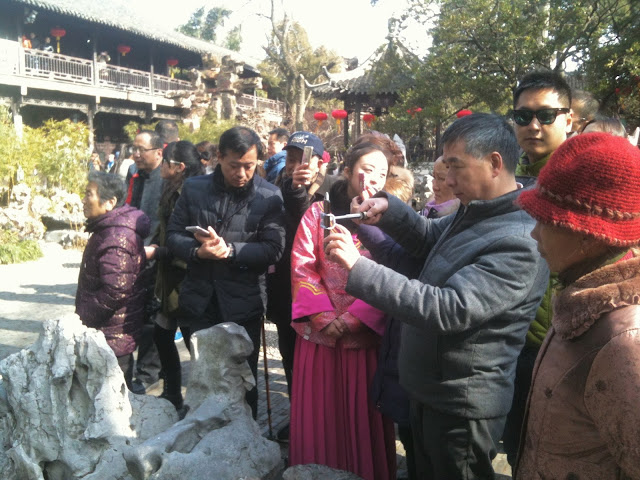 There is a certain level of ennui I have come to associate with Chinese heritage sites: once you've seen one you've more or less seen them all. There may be exceptions but Geyuan isn't one of them: we trudged from one unconvincing restoration job to the next. When you look around the backsides of the buildings you see hastily slapped together concrete, wires poking through rough holes in the walls and air conditioning units. I was reminded of what Paul Theoux wrote about sightseeing in China, "It has all the boredom and ritual of a pilgrimage and none of the spiritual benefits." 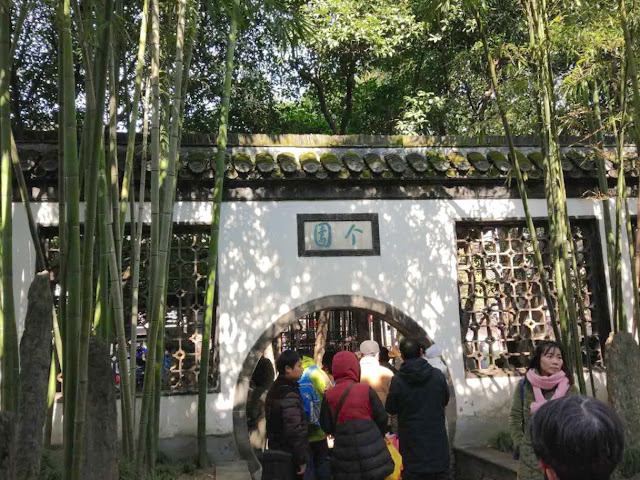 Guyuan has a bamboo garden and this was probably my favourite part of the experience on account of it being ever so slightly less packed solid. That said, I was not crazy for it either as it was all a bit too intentional in its aesthetic for my tastes. 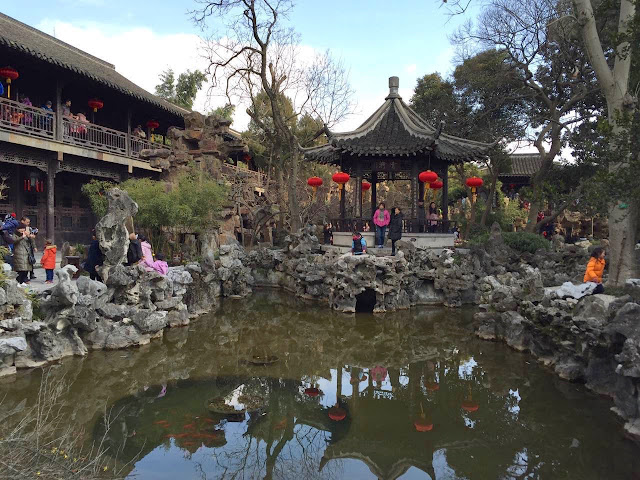 The garden worked well enough as a backdrop for selfies and group pics, which seems its primary purpose these days. I watched a constant stream of people with phones in hand carefully framing up shots, finding the right expression and then waiting for the moment that the crowd thinned enough so the background no longer resembled the Shanghai Metro rush hour. I think the attraction of the place is that it lets visitors imagine they are in one of the immensely popular costume dramas, but it was doomed to fail on a day like this. There is a paradoxically repressed yet rampant and distinctly Chinese strand of postmodernity at play here. Geyuan is not precisely a pastiche or simulation but a thorough restoration that approximates these in form and function and which offers temporal continuity to the Han who voraciously consume it in a very contemporary and disconnected way. Some sort of narrative continues, whether it has any veracity or not is irrelevant, the point is it must go on, like Burroughs word virus, to reproduce itself and continue being told. 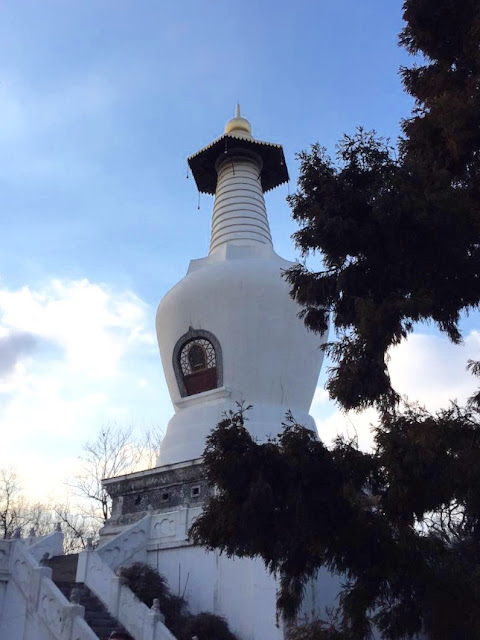 Some distance away from the garden is the Yangzhou Slender West Lake which is truly the cherry on the cake. Actually, I shouldn't get started on Chinese copies of Western cakes, that is a whole sorry topic in itself. This scenic spot, clustered around the water, is in a similar vein to Geyuan but more expansive and thus less crowded. In places it is beautiful, but it is also deeply frustrating. As I looked around a Buddhist monastery I asked myself, what went on here during the cultural revolution? What about other ups and downs? When, how, why and by whom was it restored? The site could be very interesting if there was a way to unpick the different layers, or even more so if there was a desire to make them visible, but there was none of this. The site had been designed to smoother questions and promote historical feel-good. This is not a uniquely Chinese phenomenon, British stately homes often give me the creeps too with their Downton Abbeyesque faux historical projection. The lingering impression I was left with here was that heritage used this way can never be true to itself. It is a fiction that refuses to recognise itself as one even when the cracks in the visage are glaring and there for all who want to see.
Posted by Bill Aitchison at 00:18