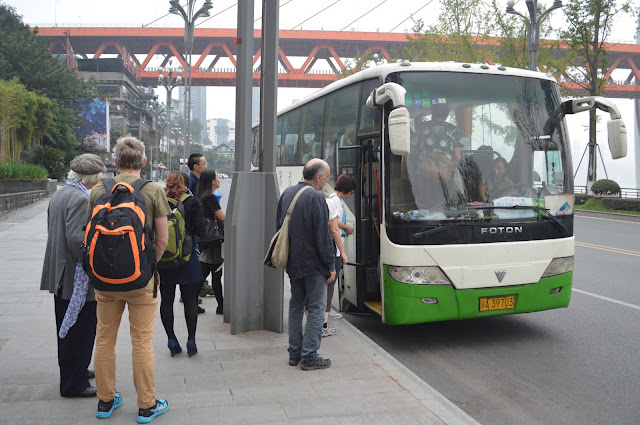 I consider myself a veteran having taken quite a number of Chinese bus tours. Almost every time I've been on it has turned out to be so bad it has been paradoxically great; there is a perverse pleasure in being shunted around as one of the masses within the world's largest domestic tourist industry. Today was going to be another tourist bus experience, a day trip to the Dazu Rock Carvings. There was to be a curious twist, however. The group was made up of artists and curators from around the world brought together for an exhibition in the Chongqing and now enjoying a day off. Many of the foreigners were new to China and most had never been on a package tour like this before. Little did they know what was awaiting them. 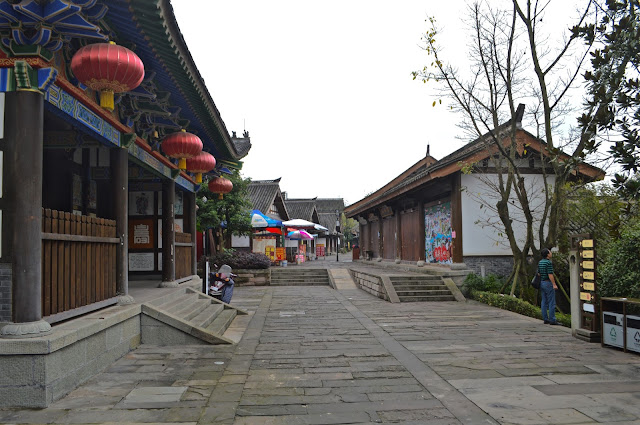 We got off in style with the bus waiting for us in a different place to where we had been told to assemble and when we finally connected, we were then driven through the mounting morning rush hour traffic to a point in the city centre where we disembarked and waited for a new coach to take us onwards. This quickly came and we were carried off again into the thick of the now slowly creeping traffic, our guide urging us, in Chinese, to relax. Mystified but excited to be rolling out of the city, we finally reached a B-List stop-over attraction after an hour or two. This turned out to be a newly reconstructed historical site that housed a few souvenir stalls. It seems its primary purpose was as a toilet stop. 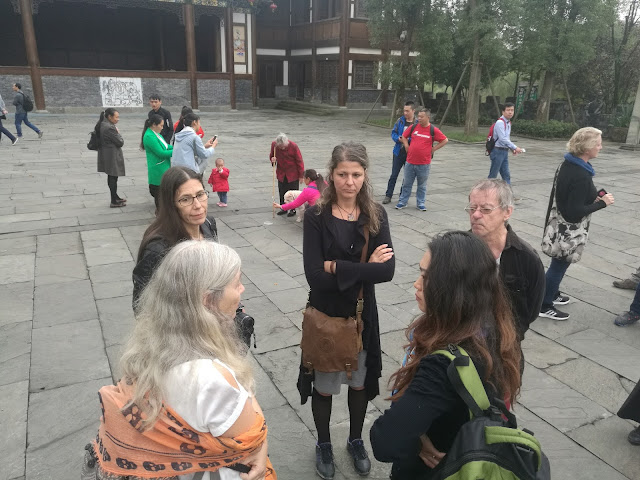 We broke out into groups and seemed to quickly exhaust the site's potential, our visit lacking any context or, beyond the restrooms, purpose. The thirty minutes we had to look around were more than enough. 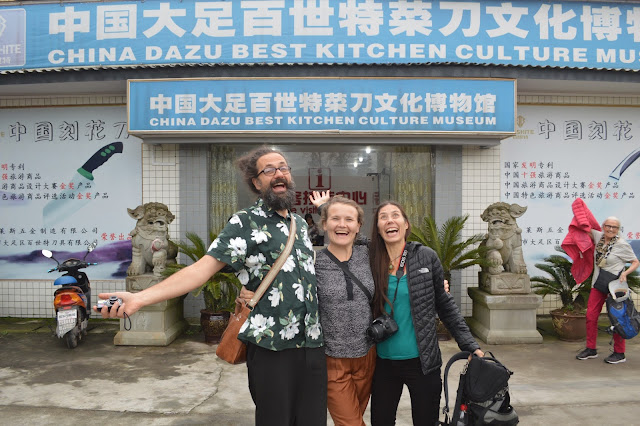 Our next stop, the China Dazu Best Kitchen Culture Museum was another story completely! This was a place that stretched the definition of museum to well beyond breaking point: it was very plainly a shop and restaurant with an attitude. The Dazu in the title is the giveaway: this meant we had arrived in the vicinity of our destination, the Dazu rock carvings. The 'museum' was a coach party's lunch and shopping stop par excellence. What's more, looking around it in the company of a group of artists new to China, allowed me to relive my first encounters with Chinese bus tours. Some were downright incredulous. 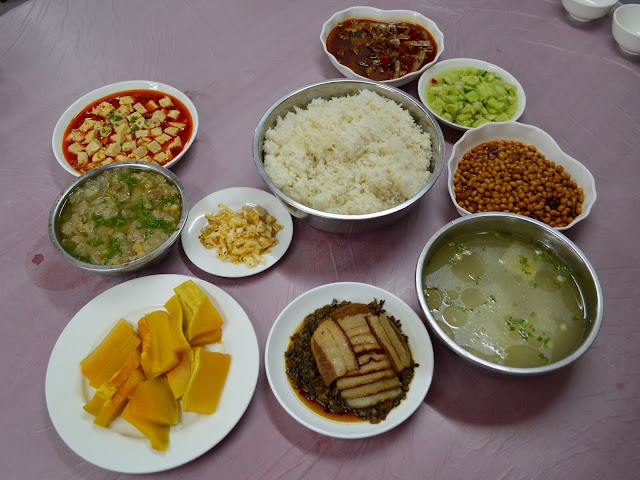 The best that can be said about the lunch was that it was adequate in quantity, though half my table of nuisance weirdo non meat-eating foreigners (myself included) wouldn't touch most of it. 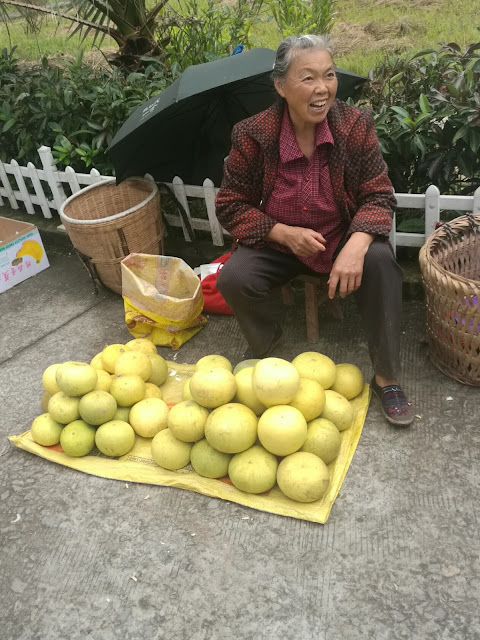 We went back through the 'museum' which merged seamlessly into a showroom and shop. Outside, three old ladies were selling pomelos which turned out to be both good value and fresh. I think I must have spent more time with them than I did with the exhibits. 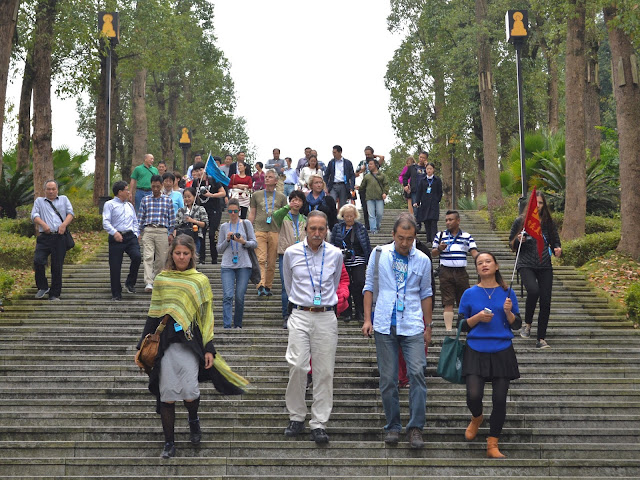 We finally arrived at the Dazu rock carvings where we were separated into a Chinese speaking group and an English speaking group. We weren't briefed on the site beforehand so didn't really know what to expect, but by this time it was clear that the best attitude to take was just to relax into the experience and let it be whatever it was going to be. We were joined by an American doctor and his Chinese student, who, for a while seemed to become our guide. 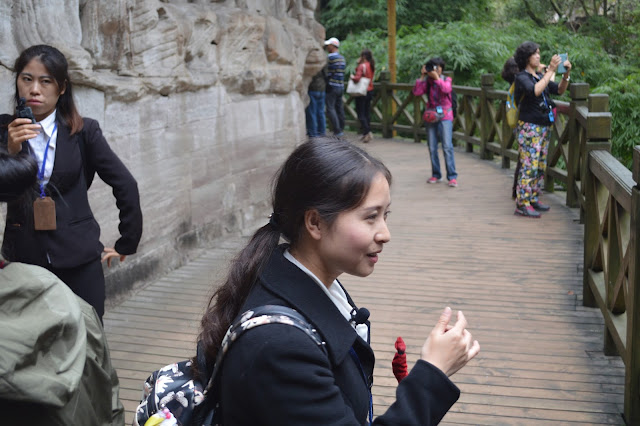 On the site proper, a new guide took over. She introduced herself as Angela and she told us she was a native of Dazu who had been giving tours for several years. She spoke through a microphone which relayed her voice into our headphones. In this way the there was not the usual earsplitting chaos of competing amplified guides that often come in places like this. What's more, her English was quite clear and she seemed to actually like and respect the place. 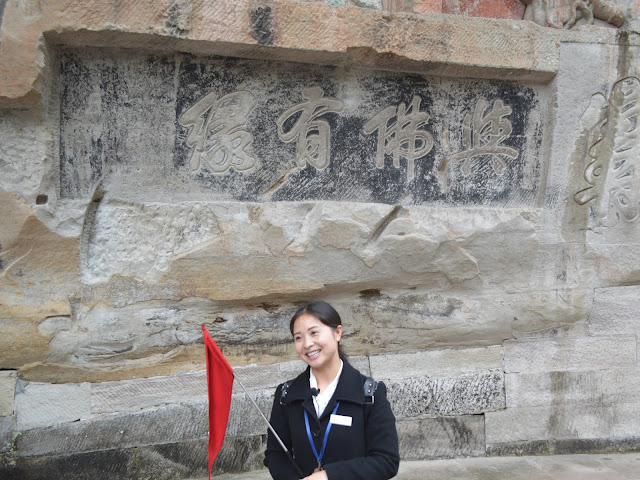 She did have this habit, however, of sometimes sounding too rehearsed. For example, at one point she said the women of Dazu are known for their beauty, and as she said this she put on a falsely modest smile and tilted her head to one side. This might have been a spontaneous comment and gesture she once made, many years ago, but by now it seemed to me to have hardened into a moment she performed every time she stopped at this point. I understand that it is perhaps too much to expect that she gives the tour for five years in a foreign language and still sounds fresh. I was happy enough with what we got, which was already significantly better than average. Still, this makes me think that tour guides and actors performing long runs face a similar problem of appearing stilted. Their solutions are often different though not unrelated. From what I've seen, the most successful tour guides get over this difficulty by making their tours more interactive, primarily opening up to the group they are leading but also sometimes responding, in the moment, to the living site they are visiting. It might be a stretch, but you could say this is the tour guide equivalent of the Meisner method. 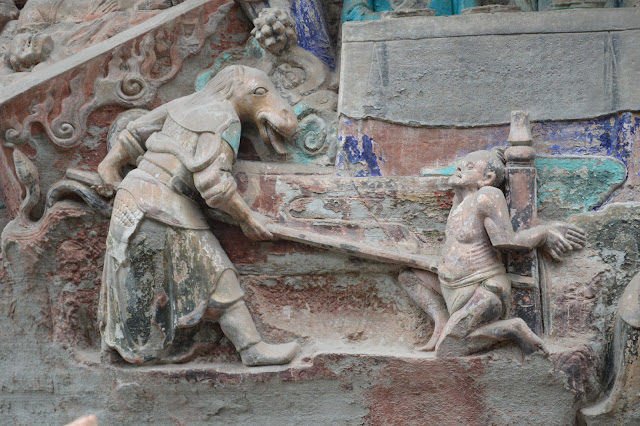 I have to admit I was more interested in the carvings depicting hell than those showing heaven. I never imagined the Buddhists would be so thorough in their administration of suffering. It seems to me that hell lends itself more to art than heaven: there is greater drama in suffering than in comfort. I immediately though of the Chapman brothers' Hell sculpture which exaggerates and locates torment to such a degree it reaches a level of black humour. 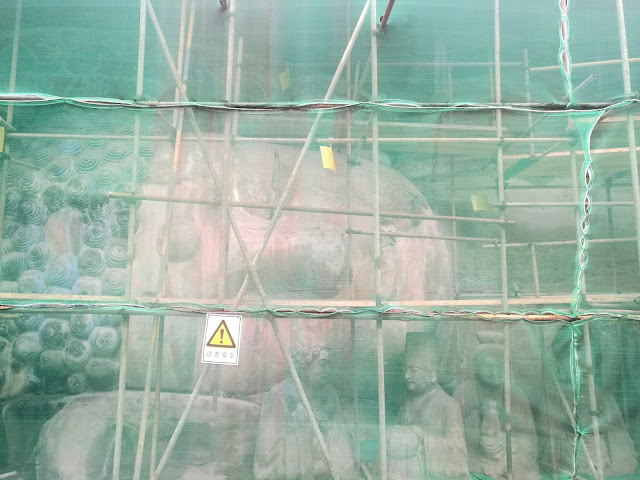 The most famous carving, the 31-metre long sleeping Buddha, was under wraps and was barely mentioned. As the tour went on I started to realise that our guide was not just contextualising a historical and artistic site, she was also using it to deliver the messages of the sculptures. The site, I learned, was educational and devotional and, contained within the carvings, were many stories and morals drawn from different sources (Buddhist, Taoist and Confucian) instructing the viewer how to live. We were therefore treated to some of these ideas, and when she finished telling us to be nice to one another she tilted her head to the side again, and give a little smile. 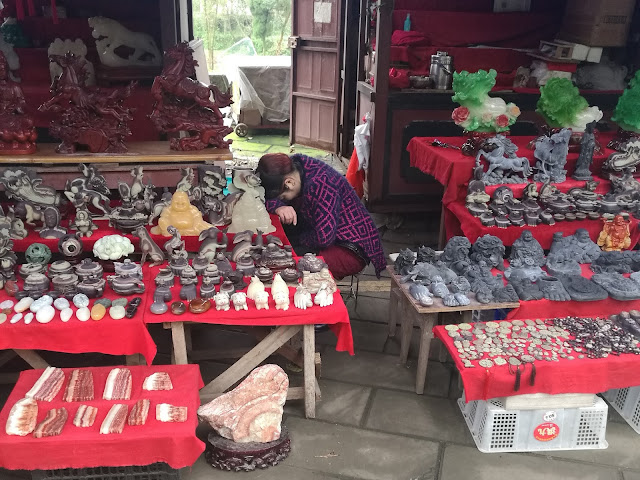 The Buddha was not the only one sleeping. Once out of the gate it was not so much a case of exit through the gift shop as exit along the gift shop road. There was a relentless duplication of stalls at each of which sat, or slumbered, mostly middle-aged women. They sold a fantastic array of Buddhist souvenirs riffing off a rock and stone theme, factory produced antiques, plastic replica swords and tray-loads of shiny plastic children's toys. Business was decidedly slow and I counted at least three stall owners who had slipping into their afternoon nap. 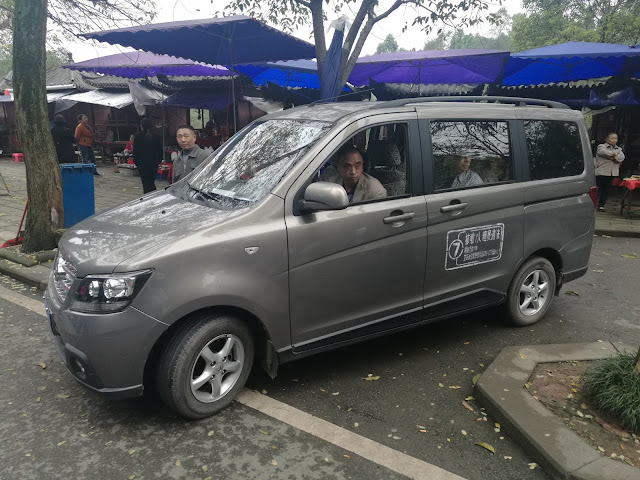 We were urged, no implored, to take a ride back to the coach in one of these cars but a group of us walked anyway. There was a bit of a cultural difference here. Most Chinese tours I have taken try to reduce walking and physical exertion to a bare minimum. I can only speculate that this is because using the body is associated with physical labour, poverty and the past whereas tourism is modern, effortless and connotes wealth. Still, walk we did and, as well as saving ourselves 5 RMB each, it brought us once again to the monumental pastiche structures that clustered around the entrance. These behemoths testament to a fetishised history that announces YOU HAVE ARRIVED at a national level tourist attraction.
Posted by Bill Aitchison at 08:56