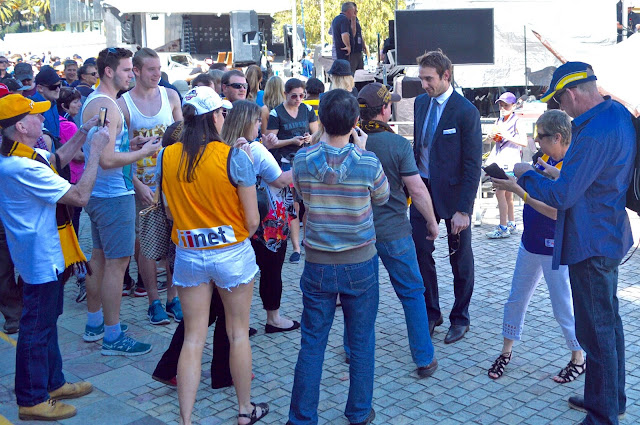 The meeting point for Melbourne Walkabout's Laneway Luncheon Tour was set: Federation Square, the gravitational core of this city of 4 million people. Befittingly, the crowds were out in force, as were the Australian Rules Football celebrities and the outdoor broadcasting studio: this was Grand Final day, the culmination of the football season when the two top teams compete for glory. The morning sun was already biting into my pale skin. I clung to the shadows where fans snapped idols and where I reached for the sun block. For a spring morning, it was freakishly hot and it would rise to 32 by the afternoon, the highest ever temperature for a Grand Final, I was later told. 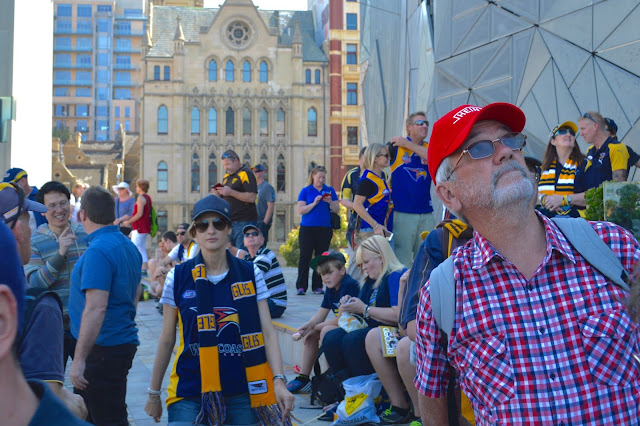 In the swirl of the crowd it was not so easy to find our guide, who was wearing a blue T shirt. I finally spotted her tapping her phone and it was only through using it that the entire group of seven of us was able to assemble. 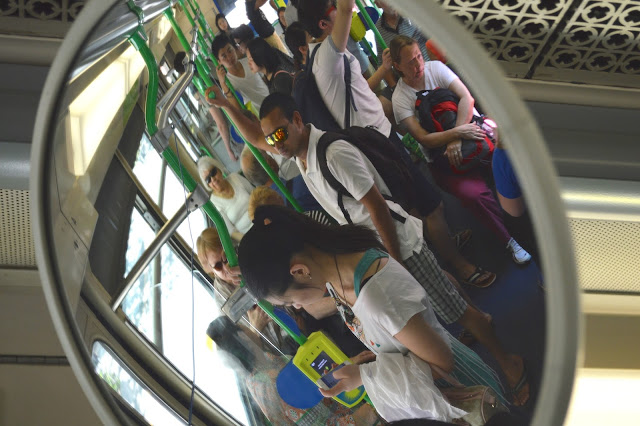 We glided onto an air conditioned tram and cut our way north up Swanston Street. Between the heat and our group's average age, it was worth saving the legs and taking advantage of the free city-centre trams as there was plenty of walking still ahead of us. This was a good way to get started and put a little momentum behind us. 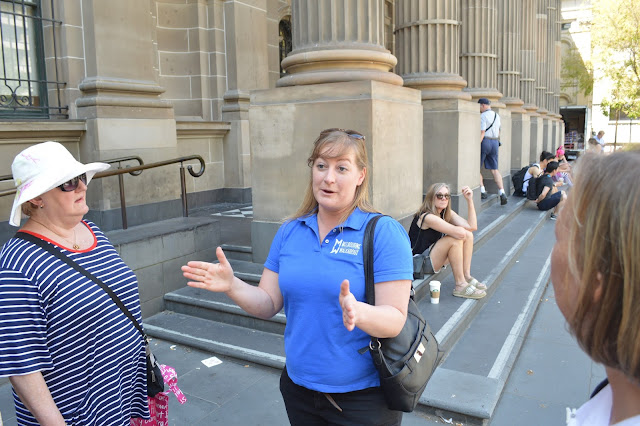 Standing outside the impressive State Library of Victoria, we were told about how it came into being and we were given the option of taking a look around inside. This tour was not run according to a fixed itinerary with a tight script, it was a walk through the city-centre stopping at many places, and sometimes popping inside when there was collective interest. My group was made up of six older Australian ladies, one half of which was a group of friends over from Sydney. I was quite definitely the odd one out but here our interests were similar: we all wanted to go inside and see the Ned Kelly exhibition. 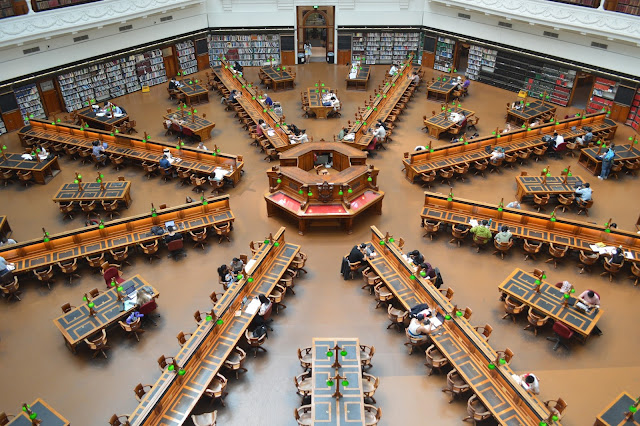 Before we made it to Australia's most famous outlaw we admired the view from an upper balcony of the library. At the centre of the reading room is the permanently vacated enquiry desk: a blinded panopticon. I worked in the SOAS (Uni of London) library for a couple of years many moons ago, and when I was looking at this sight I was reminded of that time, back in the 90s, when readers would trouble you in person. Nowadays, readers are kept at bay and watched remotely; the NSA and GCHQ tracking their internet usage and discrete CCTV cameras capturing them smuggling their banned-in-the-library chocolate bar into their mouths. 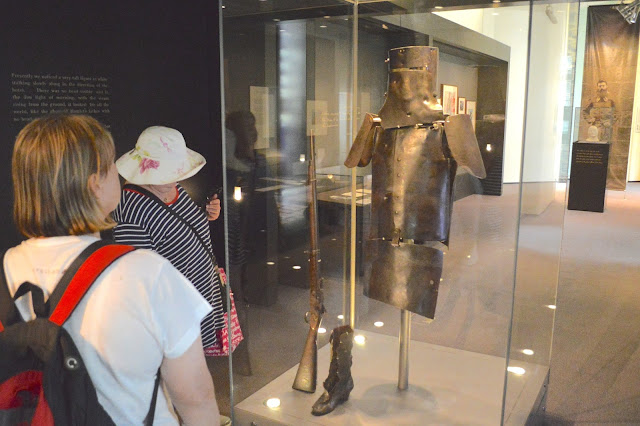 Then we came upon a thoroughly tamed Ned Kelly. This was not the wild fugitive holding out from the police with gun blazing, this was his iconic body armour professionally displayed in a glass case amidst an exhibition on the man and myth. Kelly has been the subject of more biographies than of any other Australian, including today's figures in the media spotlight such as Shane Warne, Kylie Minogue or Rupert Murdoch. We didn't really hear so much about the Kelly story on this tour, we simply dropped in to see some of the artefacts as the rest of the group were already familiar with the tale. These artefacts also included the Jerilderie Letter, dictated by Kelly, where he tells the story from his point of view and which casts him as a victim of police anti-Catholic persecution. The story certainly has a number of levels to it and a big chunk of its appeal must be that he is seen by some as a Robin Hood figure, while by others as a common criminal. What is uncontentious is that he is highly infamous and as a result of this has spawned a minor tourism industry all of his own today. Search Kelly tours on the internet and you'll see an array of choices that include gastronomic tours of 'Kelly country' and candlelit tours of his site of execution. In the Victorian outback and NSW border area, he must surely be the biggest hook upon which to base a range of outdoor tours, so Kelly country it is. 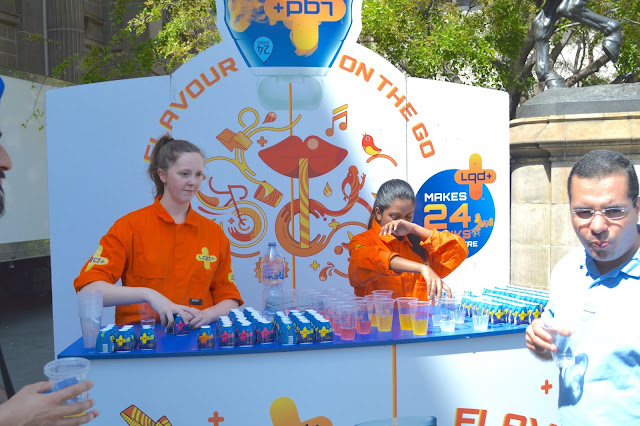 Outside the library there was a bit of a buzz around a stand where a couple of young ladies were handing our free drinks. Between the hot weather and the girls giving away both glasses of their soft drink and the bottles of concentrate to take home, it was the obvious next stop for our group. We hoovered up the bottles and drank gratefully but when I got home and tried them in the cooler atmosphere of the evening, the 'free give-away' appeal had worn off and I was left with three small bottles of brightly coloured chemicals destined not to make it into my luggage for the flight home. 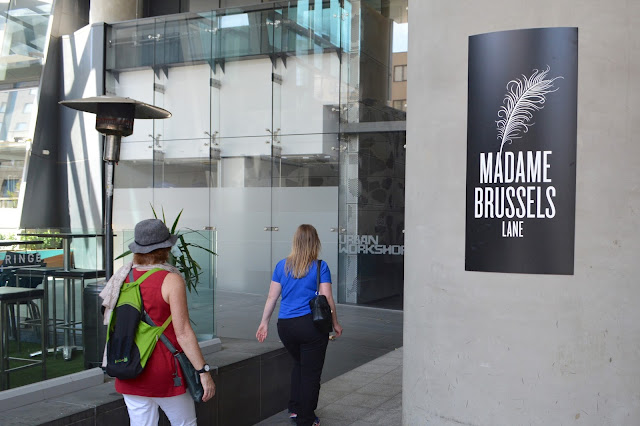 We were led down Madame Brussels Lane which was introduced to us as being the heart of the city's former red light district. As I mentioned previously, visiting the historical sites of prostitution, such as that which I did on the Qianmen tour of Beijing, doesn't make for nearly as interesting a tour as visiting a living site in the way you are able to on the very popular Amsterdam red light district tours. That said, a good story about this place's past that could have tickled the imagination, so to say, would have brought it to life. I mention this because I heard just such a story on the Parliament House tour, which I will get round to writing up shortly. The story involves the stolen speaker's rod and a certain disreputable establishment favoured by the political class... Here, then, was one of those moments when my Melbourne tours started to link up and inform one another in unexpected ways. 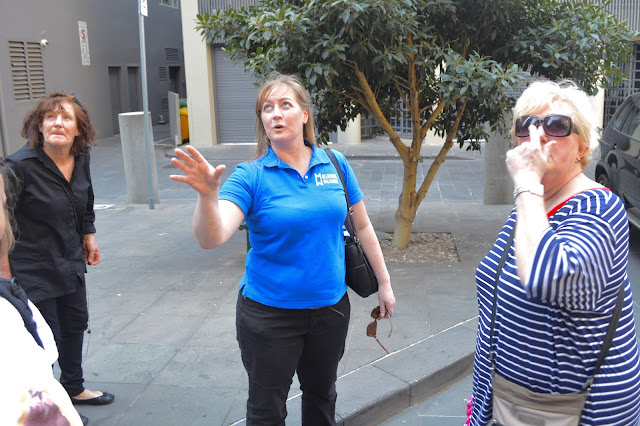 The information we were told about the places we visited was usually brief and just there to paint a picture of how the place used to be or what goes on there now. The researcher in me wanted precision, facts and a narrative, but this was not that sort of tour. This was a 'hang out with a friendly local' sort of tour. The point was not to learn things that you would only forget the next day anyway, it was to spend a pleasant two or three hours seeing parts of the city the casual visitor might otherwise overlook. The ladies on the tour seemed perfectly happy to take the place in in this way, indeed I think this was a lot more to their liking than some sort of study tour led by an expert. They were on holiday, after all, and their guide was an outgoing, younger version of themselves showing them her city. 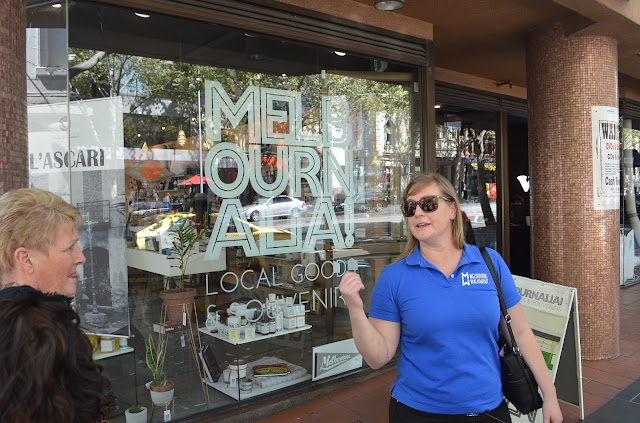 We frequently stopped outside stores and restaurants where our guide gave us shopping and dining tips. What seemed to be her greatest passion, however, was cocktails. She had an extensive knowledge of the city's cocktail bars and it seemed she had the place mapped out in detail placing one every few hundred meters. I never had Melbourne down as a cocktail city but through her eyes I started to see it in a whole different light. 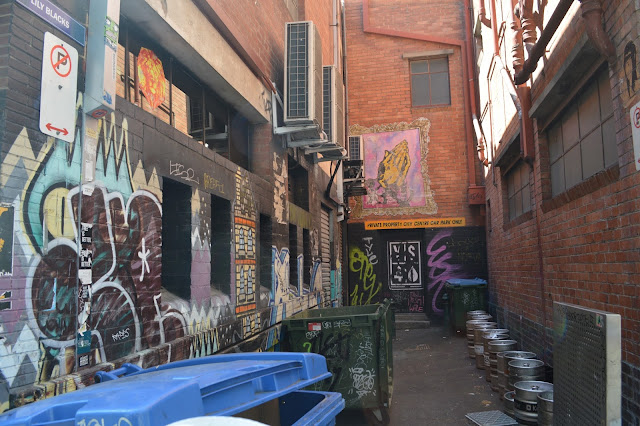 The lanes are quite diverse in character, some house shops and restaurants, this one has a nightclub at the far end. Many of these lanes thread right through the blocks and it was through these that we mostly walked. This gave the tour a more local and human scale than if we would have focussed upon the major thoroughfares along which the large colonial era public buildings congregate. 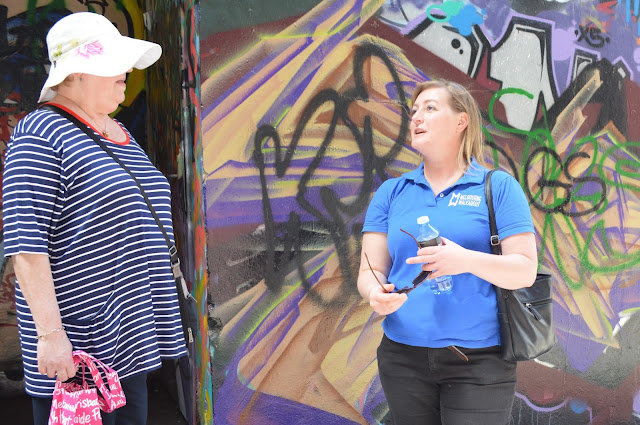 We came to the street art, which our guide was keen to show our group. The ladies were unsure at first whether they liked it or not but warmed to it once they started taking group pictures of themselves in front of it. Maybe it is a complete co-incidence but when I took a street art tour in Berlin it was also given by an Australian lady. 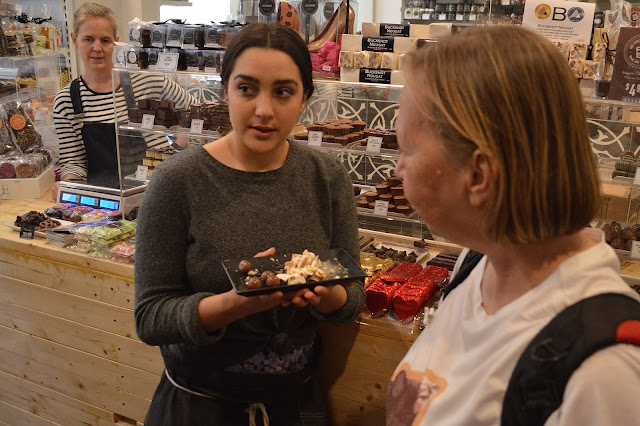 We then piled into a quality chocolate shop where we were offered some samples. Rather good they were and it resulted in a number of purchases. 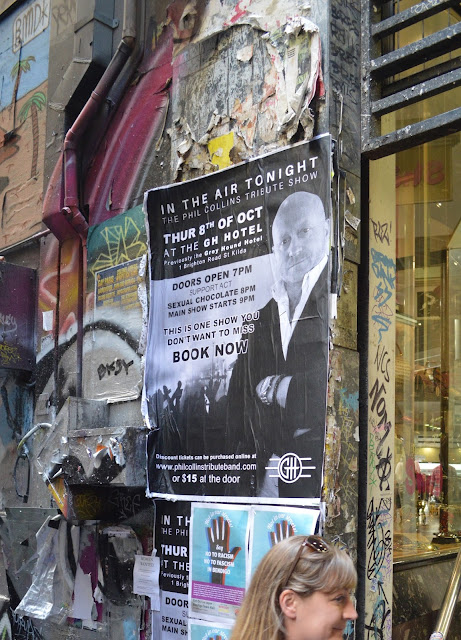 This is just a random poster I spotted as we entered some shops. It is simply not right. He looks like a moody Harry Hill. Thinking about it further, however, I started to wonder if tribute bands are a bit of an Australian thing. I have heard it said that the Australian Pink Floyd is as good, if not better, than the original and while the idea of the Aussie Floyd initially sounds like a joke, they are anything but: they have toured extensively for decades and sold over 4 million tickets. Could it be, because the country is so far from Europe and America, bands from there used to visit less frequently creating a ripe market for tribute bands to step in? Nowadays travel is easier, I suppose, but this is another genuine 'tourist theory' like the previous one on Melbourne's traffic lights. 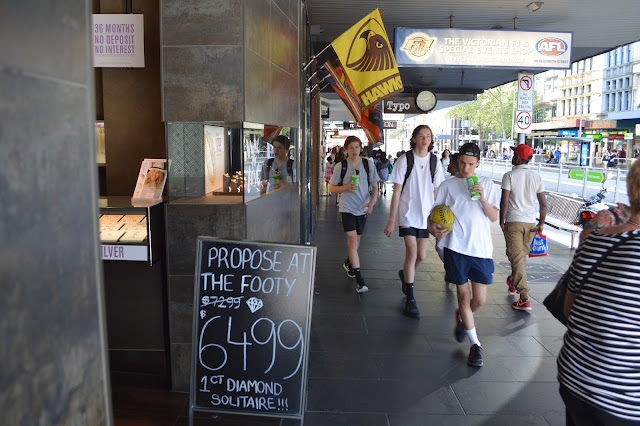 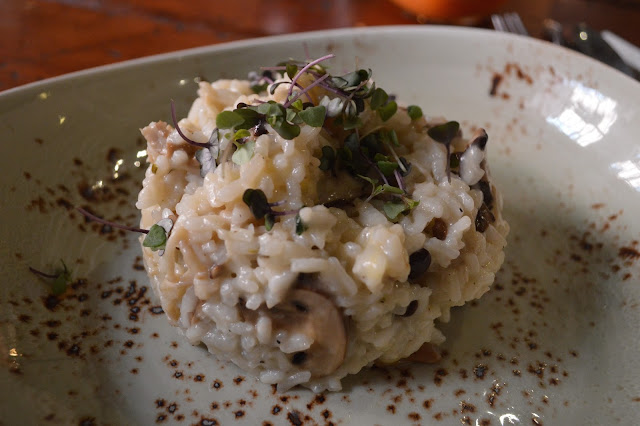 The tour finished in a cafe somewhere near Queen Victoria Market. We were treated to a dish and beverage; I had the mushroom risotto with a carrot and ginger drink. It was rich and creamy with a nice variety of mushrooms, set off by a watercress garnish. We ate sitting around a large table sharing tourist impressions of Melbourne and stories of home while the Puerto Rican waiter extolled the virtues of the Buena Vista Social Club, which played in the background. After a couple of hours walking in the heat we were about ready for a sit down. Our guide explained that just the week before the weather had been uncomfortably cold requiring a scarf and coat and she was very happy about this sudden turn around. That said, we also started talking about global warming and Australian bushfires. This tour is an informal style of one that is probably, like the meal itself, best enjoyed with friends. I certainly got to see a great deal more of the city than I otherwise would and I also got to hang out with people I'd not otherwise connect with. Of all of the tours of Melbourne I took, this was most probably the most touristic and also easiest of them, and none the worse for that either. Not being into shopping or cocktails, however, I felt that the tour was aimed more at the rest of the group than at me. Still, if that is who actually shows up, then that is entirely appropriate and it gave me a chance to step into their world, if only for one sweaty morning's walkabout in Melbourne.
Posted by Bill Aitchison at 08:25