The Tour of Britain: the lycra warriors come to town

I'm not going to write too much about this one as I am in the final stages of making a Tour of Tours here in Bath and need to spend time on that. Yesterday, however, I did watch the start of stage 6 of the Tour of Britain, and it deserves some mention. 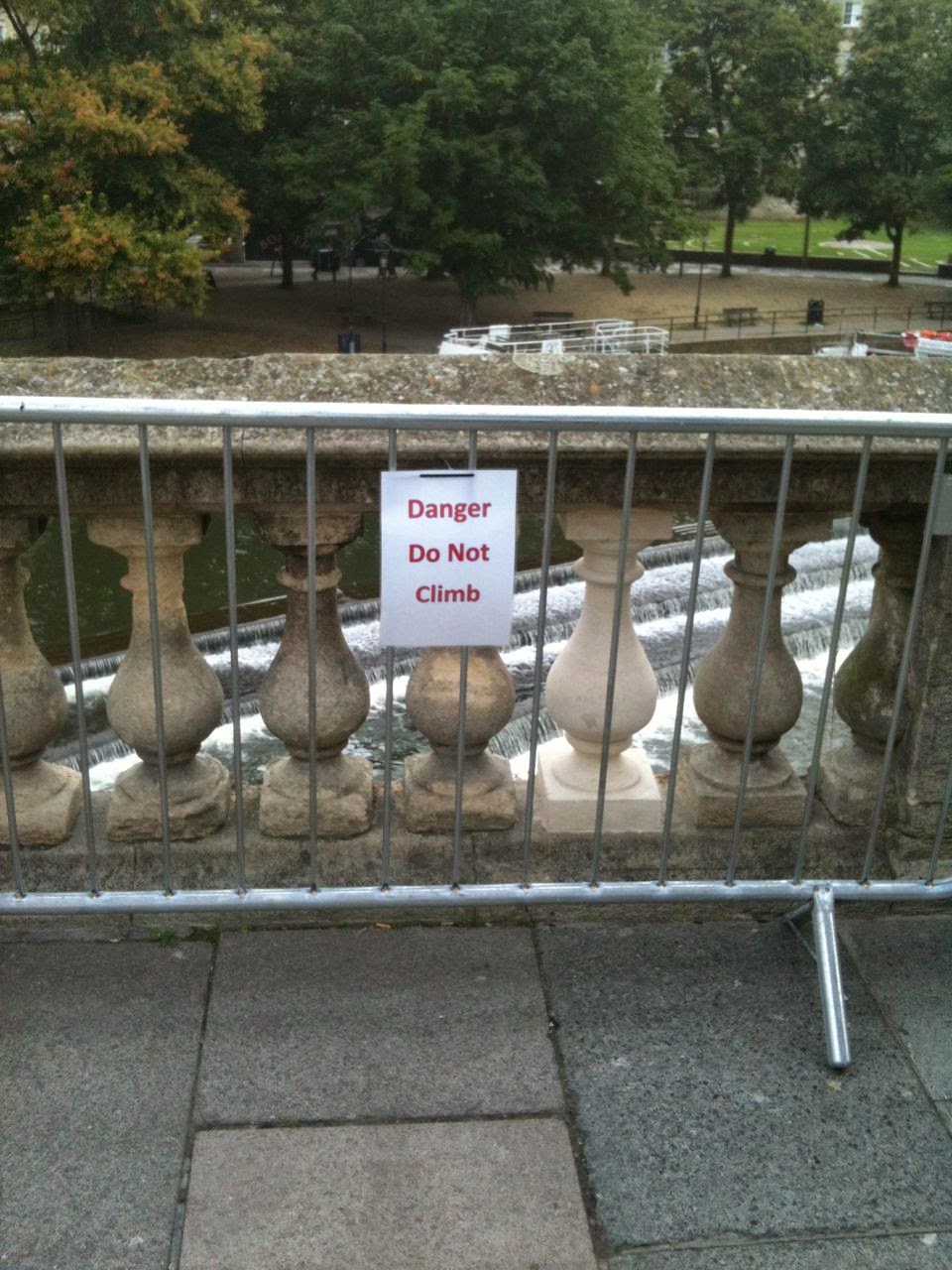 First thing to notice was the health and safety treatment the city centre received. This was one of my favourite installations. 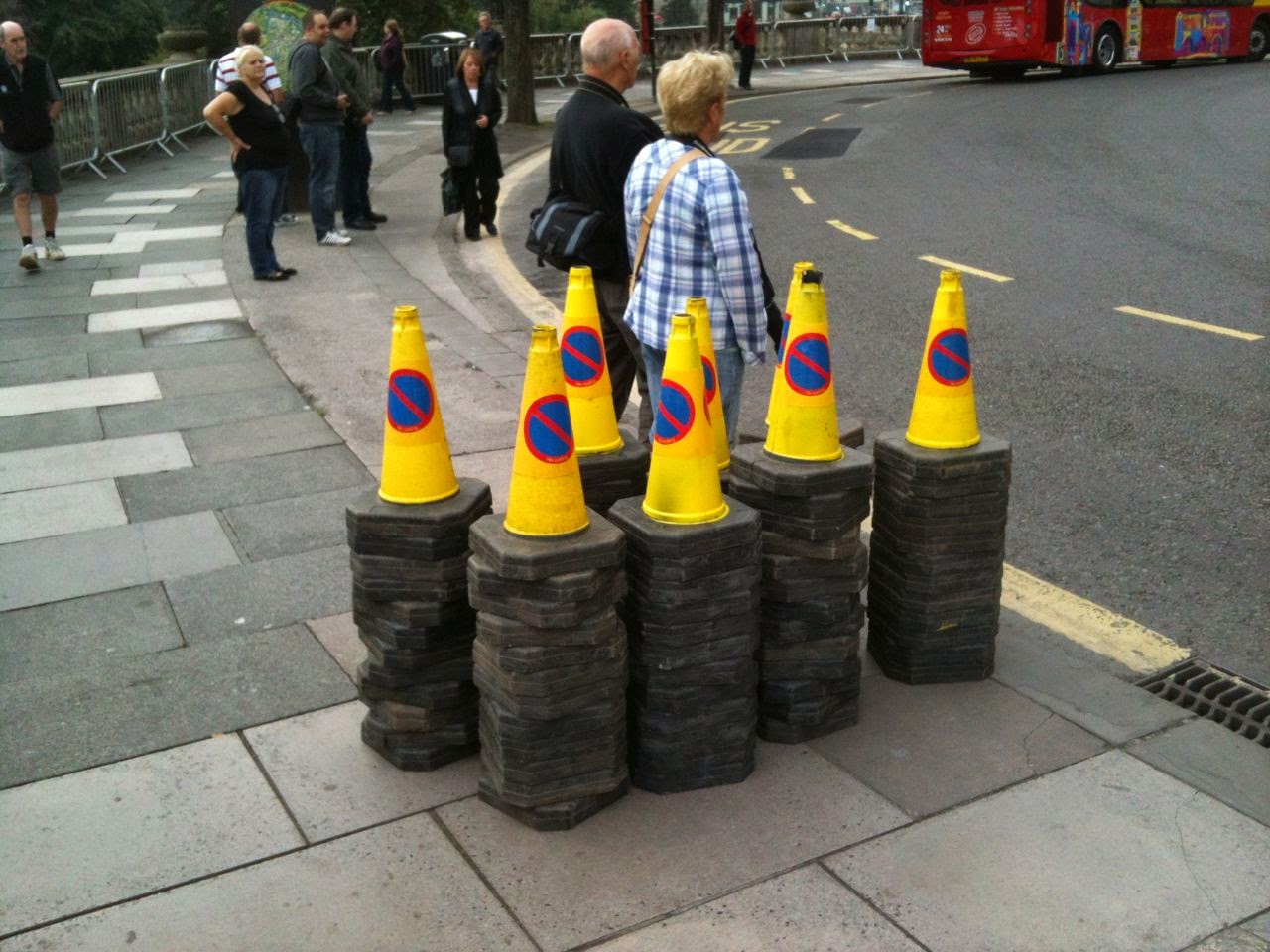 A considerable amount of resources went into hosting this cycle race which runs overs eight stages, spread over England and Wales. Hardly a tour of Britain in the manner of say Dafoe's, but then again, Scotland has the wee matter of a referendum to deal with so this race might have seemed irrelevant even unwelcome north of the border. Still, these sorts of events are a way in which the state is made visible so it is telling that Scotland was omitted. This is where the cones lived. 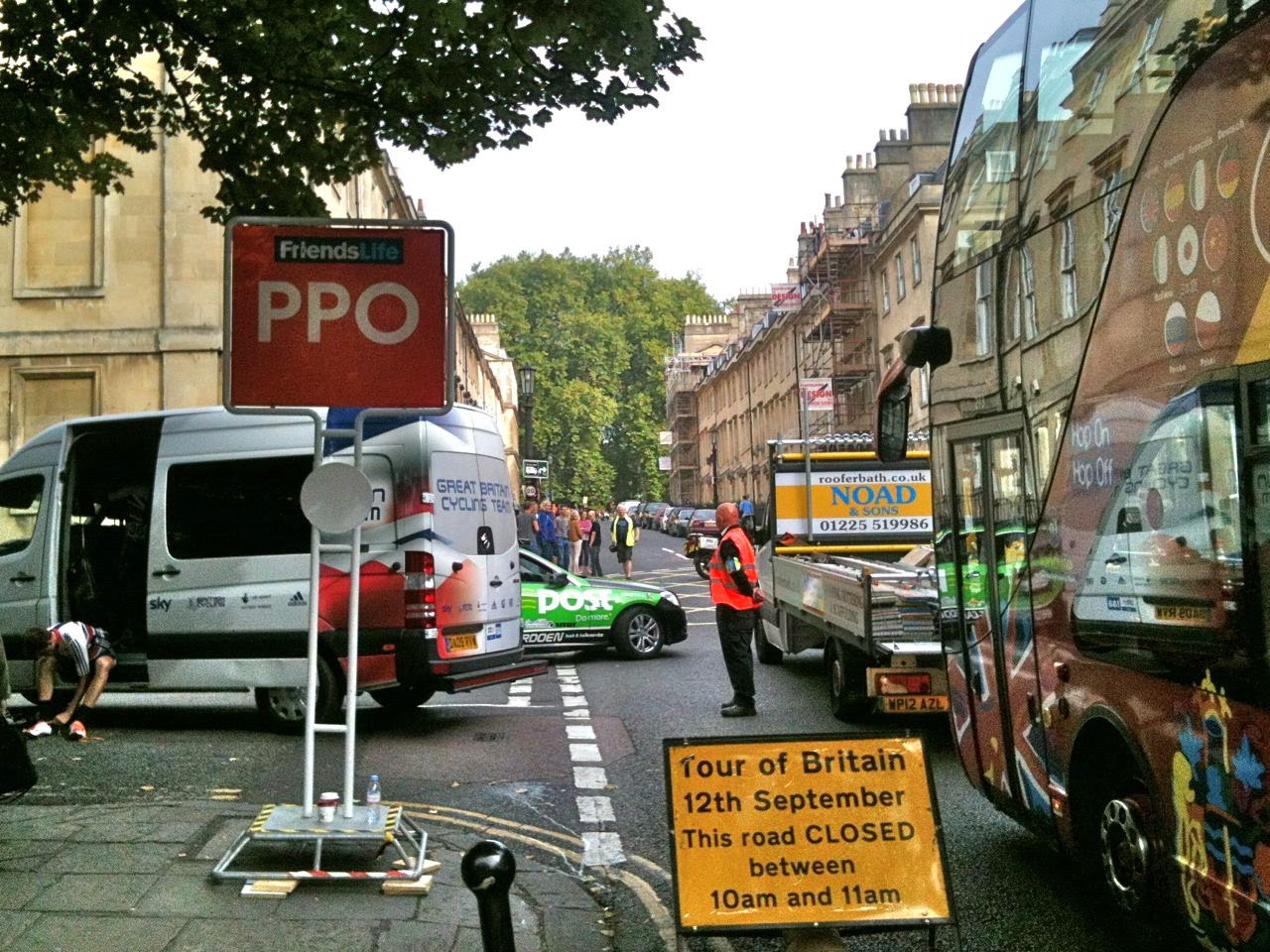 The city centre was to be blocked off for an hour or so for the start of the race. As I approached the starting point I encountered more and more race paraphernalia. And here they were: the racing bikes just sitting on the pavement. This was not formula one grand prix: the whole outfit simply rolled into town the night before and set up on the street this morning. There was no clear separation between frontstage and backstage of the operation: the backstage, as it existed, was the interiors of the various support vehicles that accompanied the cyclists. 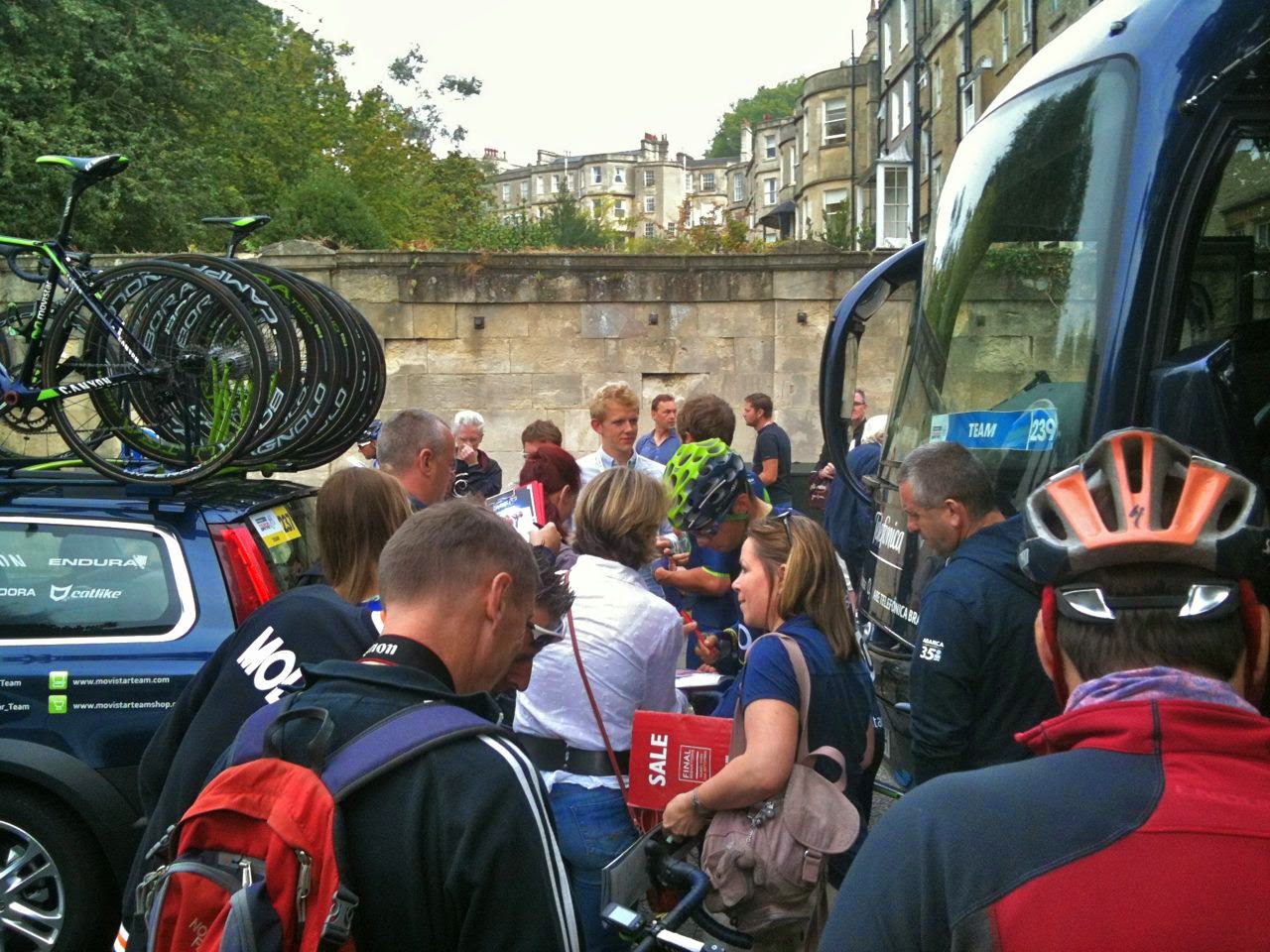 There was some celebrity buzz about the race, with the autograph hunters out and a last minute scrummage around the starting line. Not knowing one cycling celebrity from another this seemed entirely arbitrary to me. At this point I started to really notice just how many cars there were within the tour's supporting infrastructure. 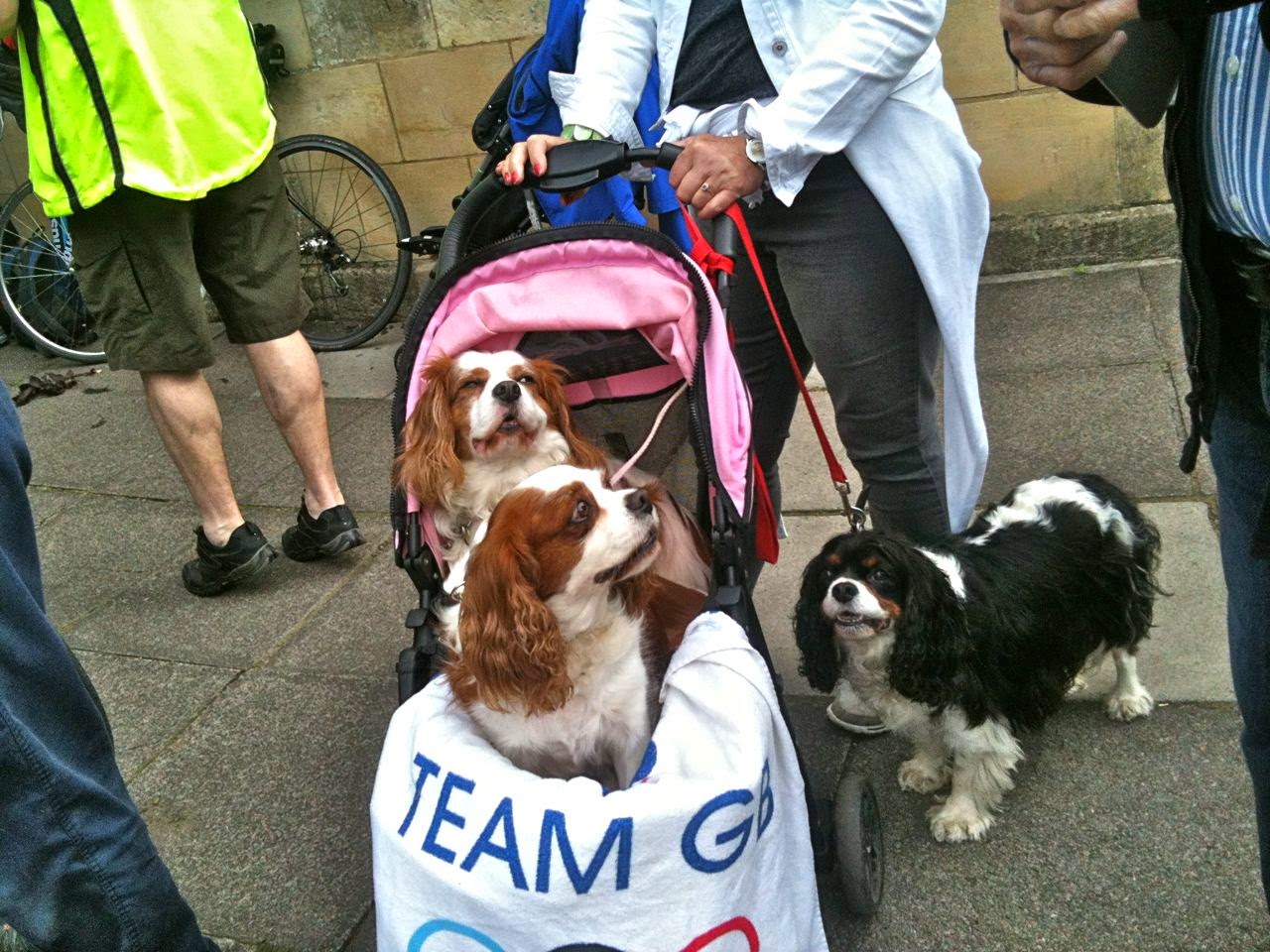 This Team GB pram with dogs was one of the more daft things I saw. I couldn't help but wonder if this might be the last time that this banner gets used. If Scotland votes for independence next Thursday this banner, made for The Olympics, will become obsolete. Come to think of it, it's already gone to the dogs. 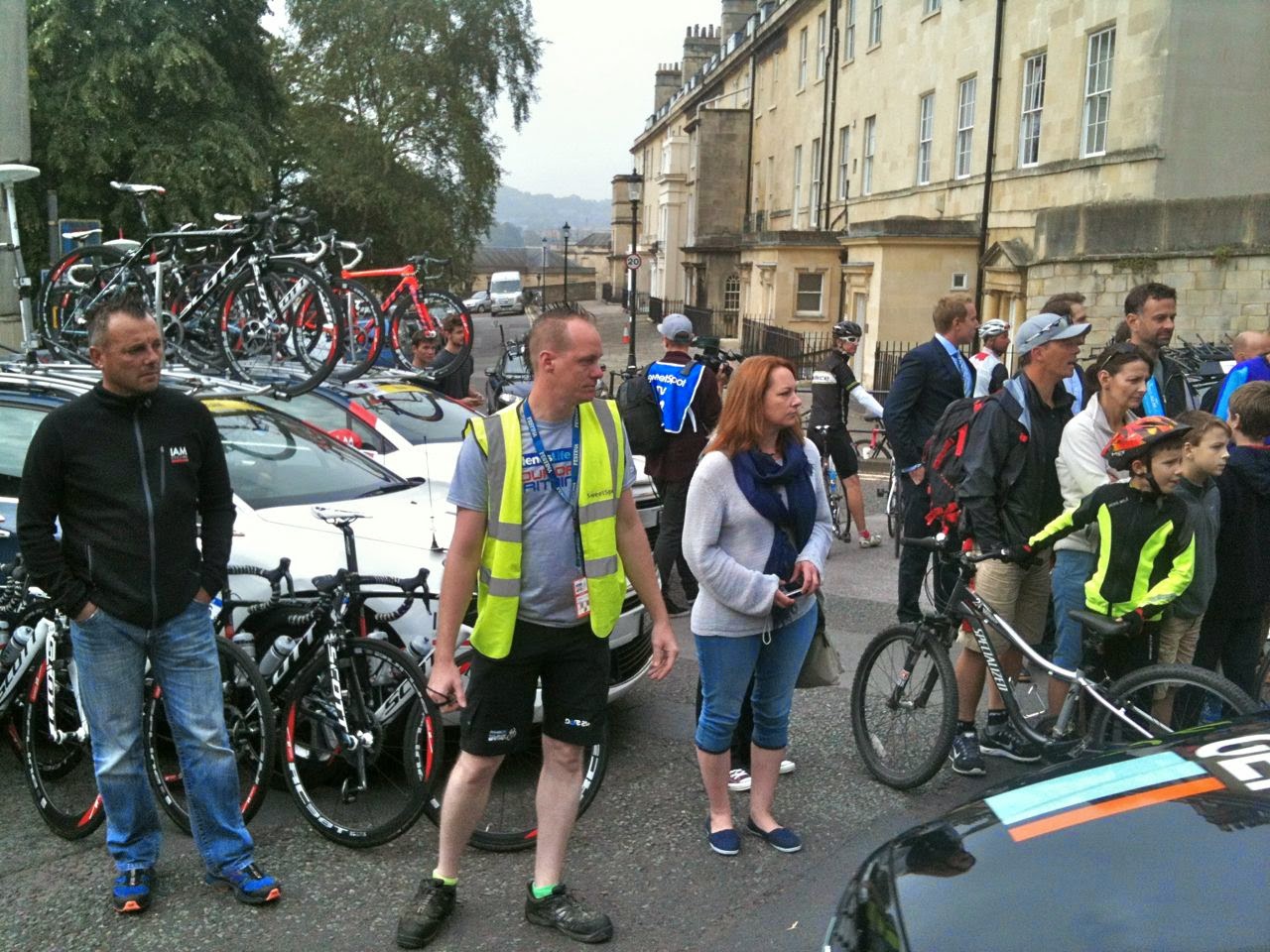 Keeping some semblance of order around the start were professional events management staff who travel with the race. One prerequisite of the job is having a loud voice so you can clear people from the road when the cars and occasional bikes come through. 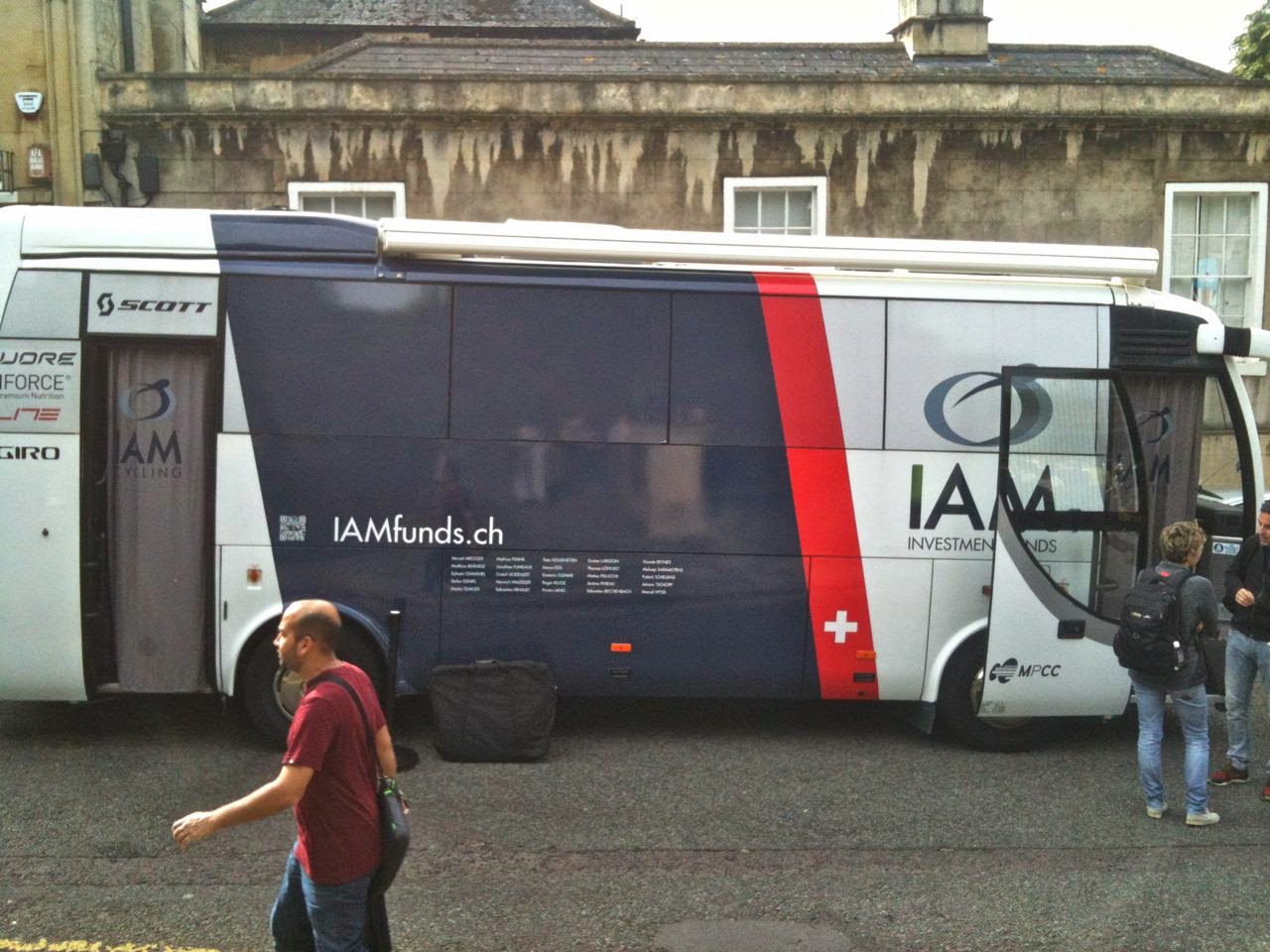 The vehicles just kept on getting bigger and bigger. The racing teams had coaches like this one which were their mobile headquarters. 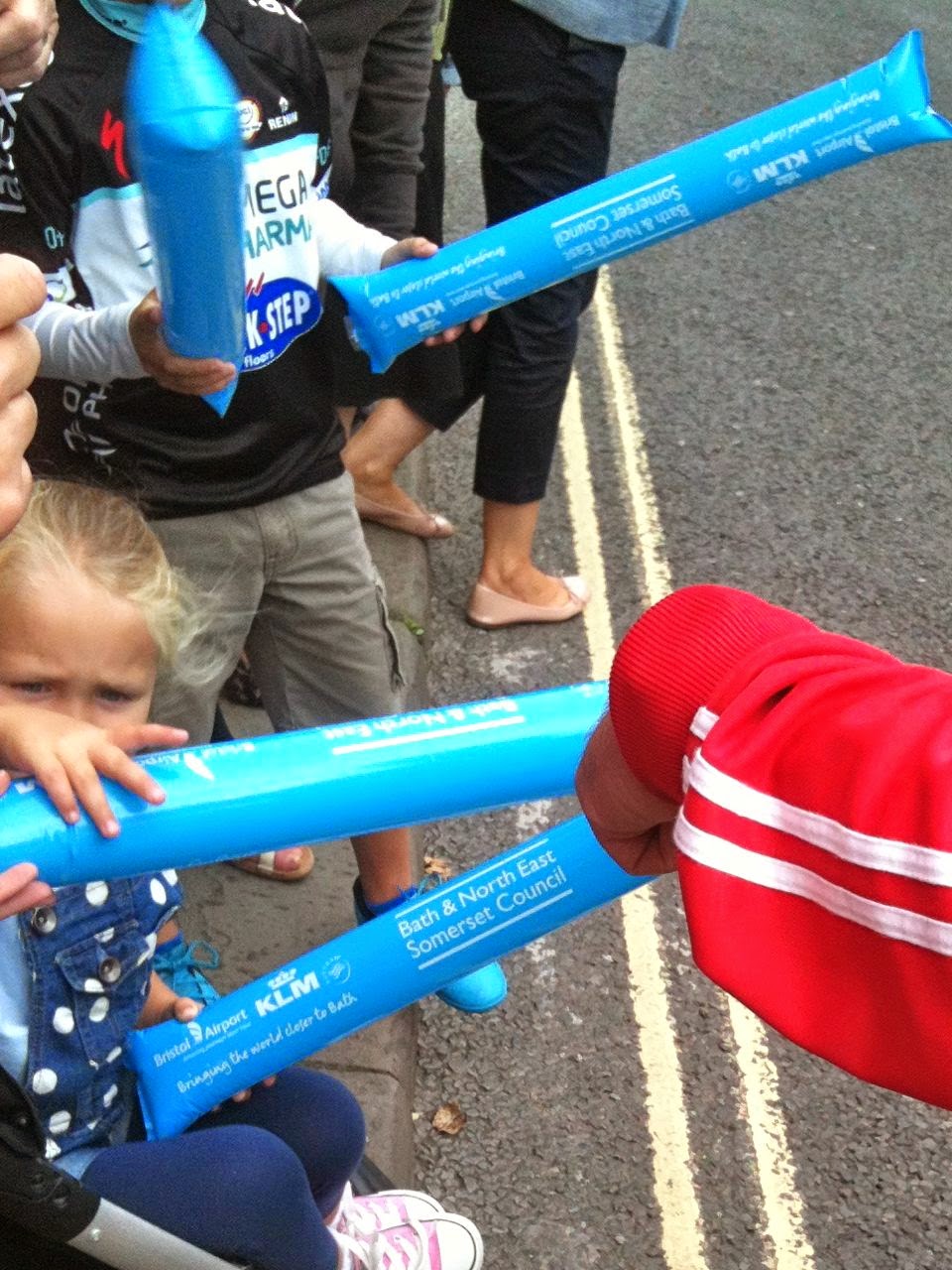 On the street the crowds gathered to watch the cyclists pass and free advertising was handed out in the shape of these inflatable batons. I noticed these are sponsored by KLM. I  had a truly horrible experiences with them that, still to this day, they have not resolved. I wish they would spend just a little bit more on a honest customer service department and not funnel it all into advertising. They are scoundrels and should be avoided. 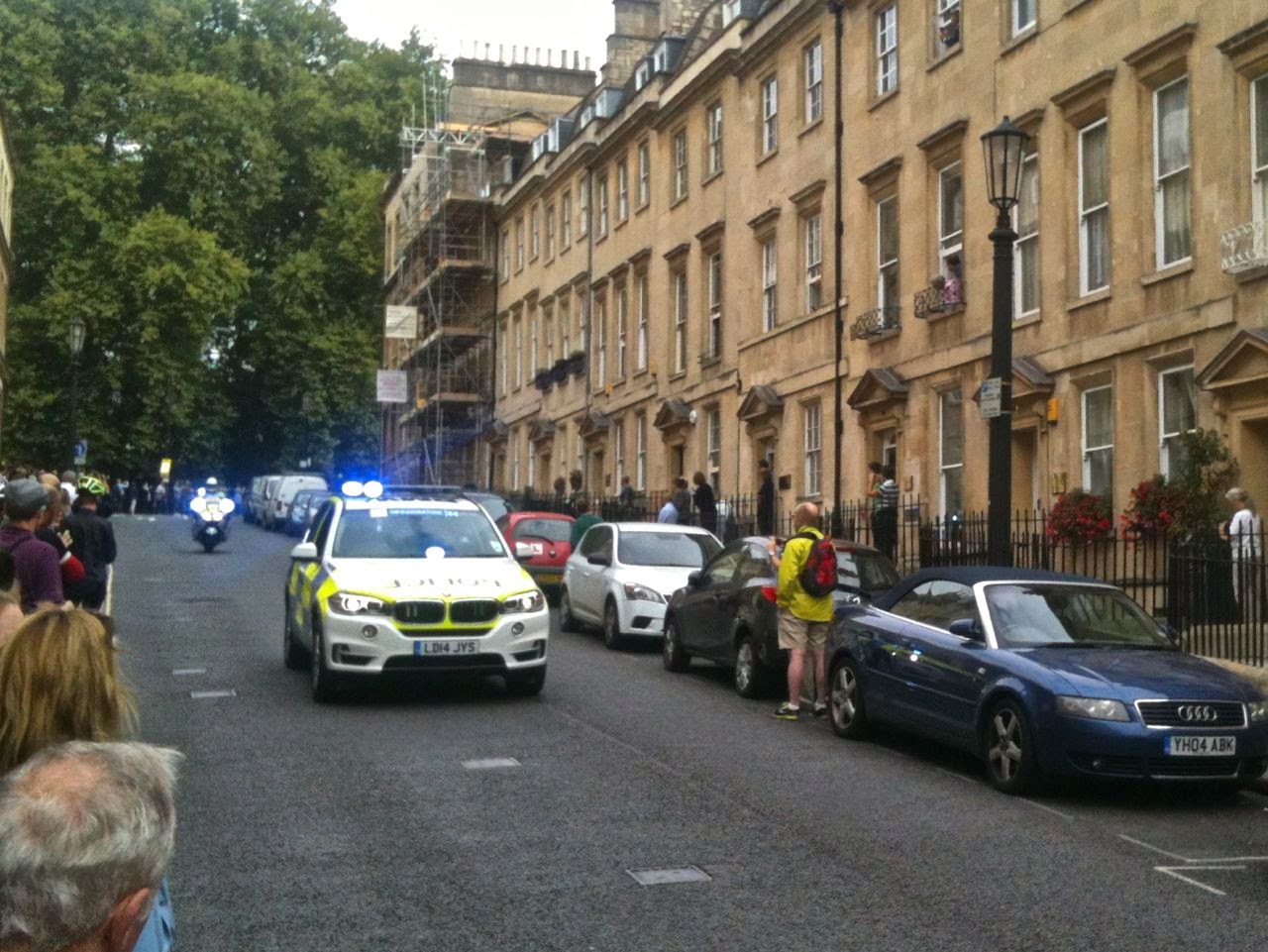 I took my position on the route and soon after, the cavalcade approached, headed up by police motor bikes and followed by a police car. Going back to Dafoe, it is interesting to read that when he visited Bath it was a building site with The Circus, in the background, just one third completed and still featuring a pond in the middle. With each update of his tour (pages 293-297) he had to revise this and many other descriptions of Bath, as the city was changing rapidly at that time. 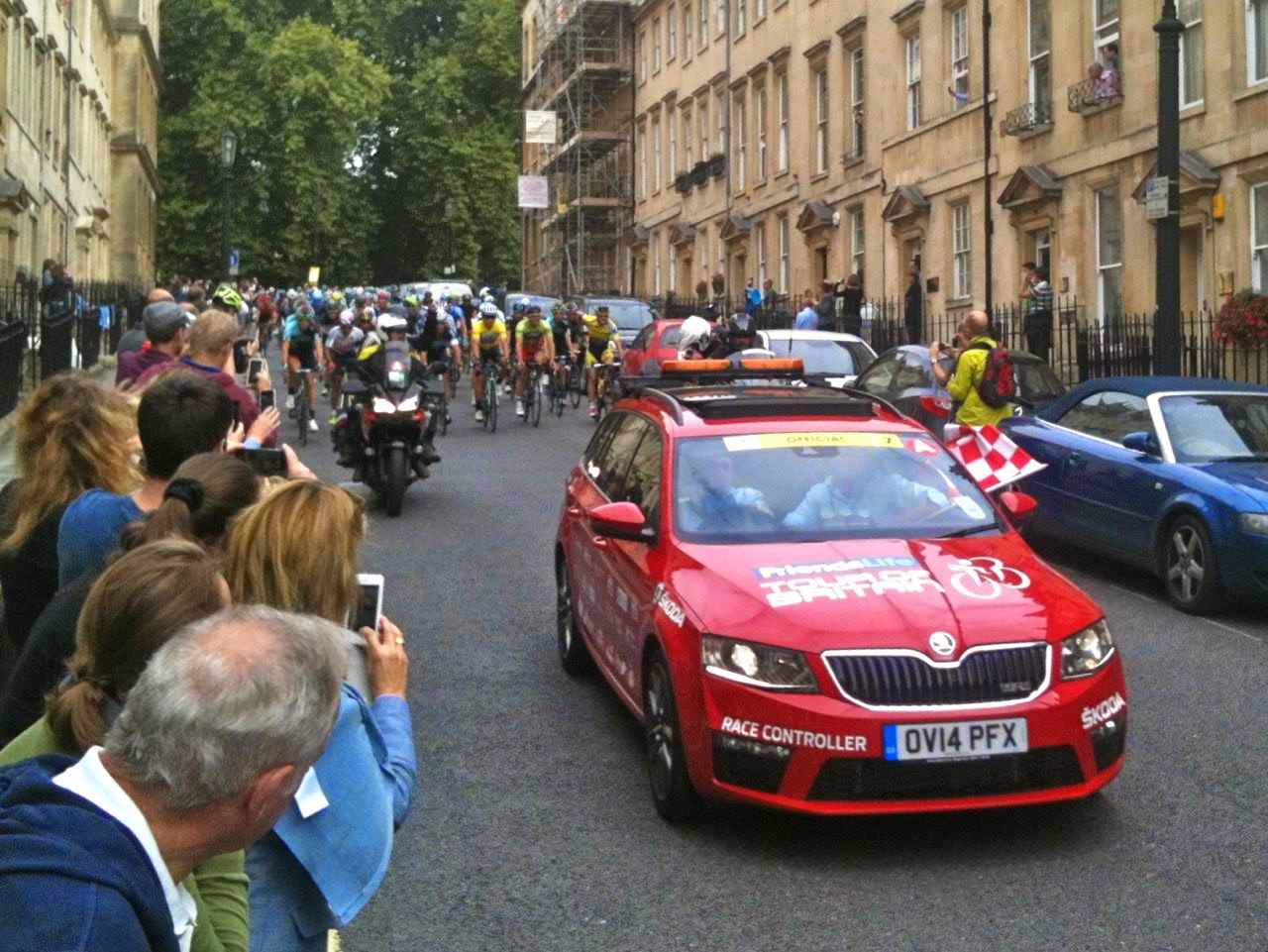 Following the police came the race controller in a shiny car and some cameramen. The technology to broadcast and edit this stuff live must be quite complicated. Behind them the cyclists themselves finally came into view. 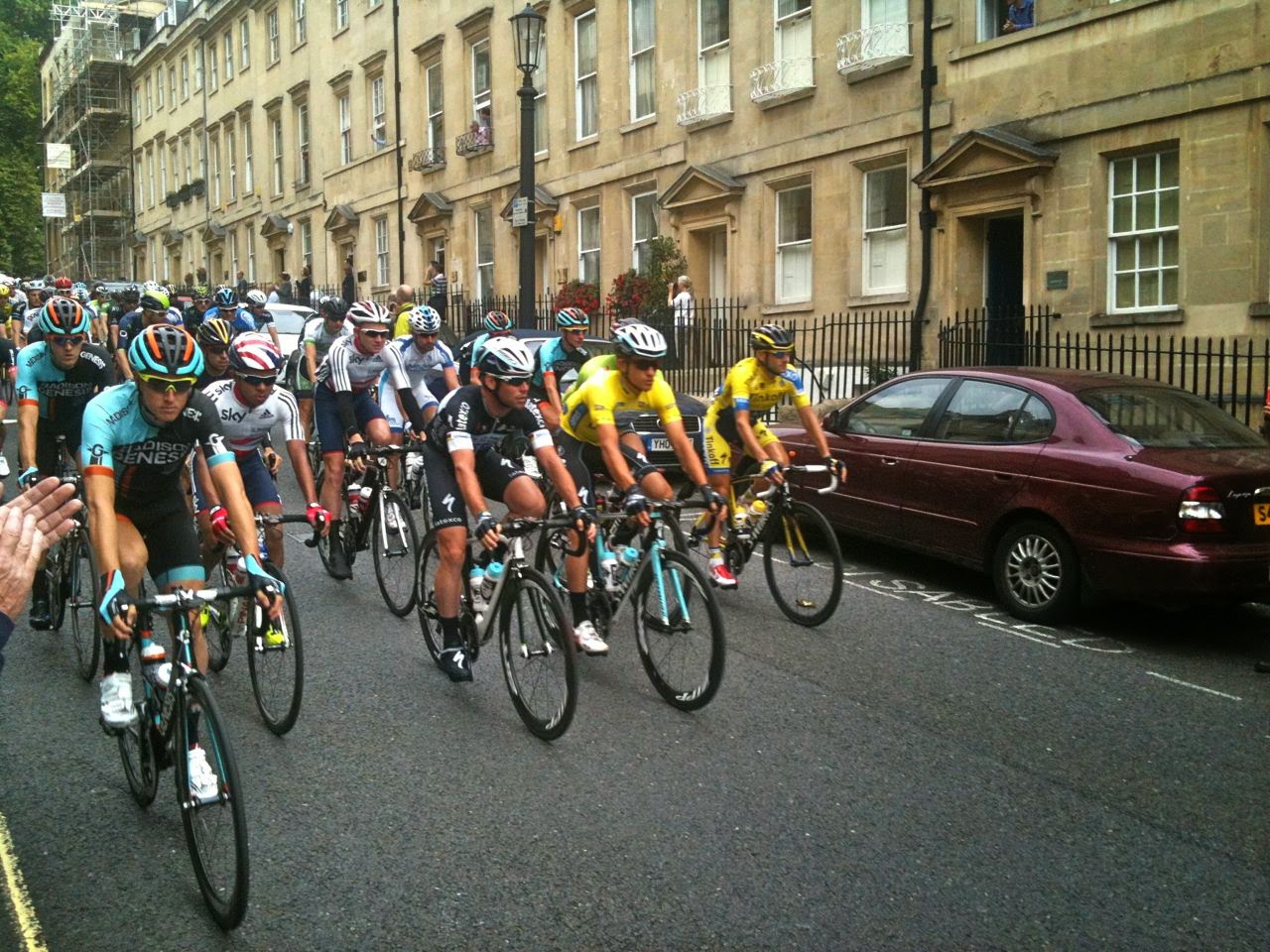 It was striking that they were not really racing at this stage. They were tightly packed and were instead making a circuit of the city centre for the benefit of the camera. In this sense, this race functions as a tourist advert: it shows a route through the city that includes all the must see locations. 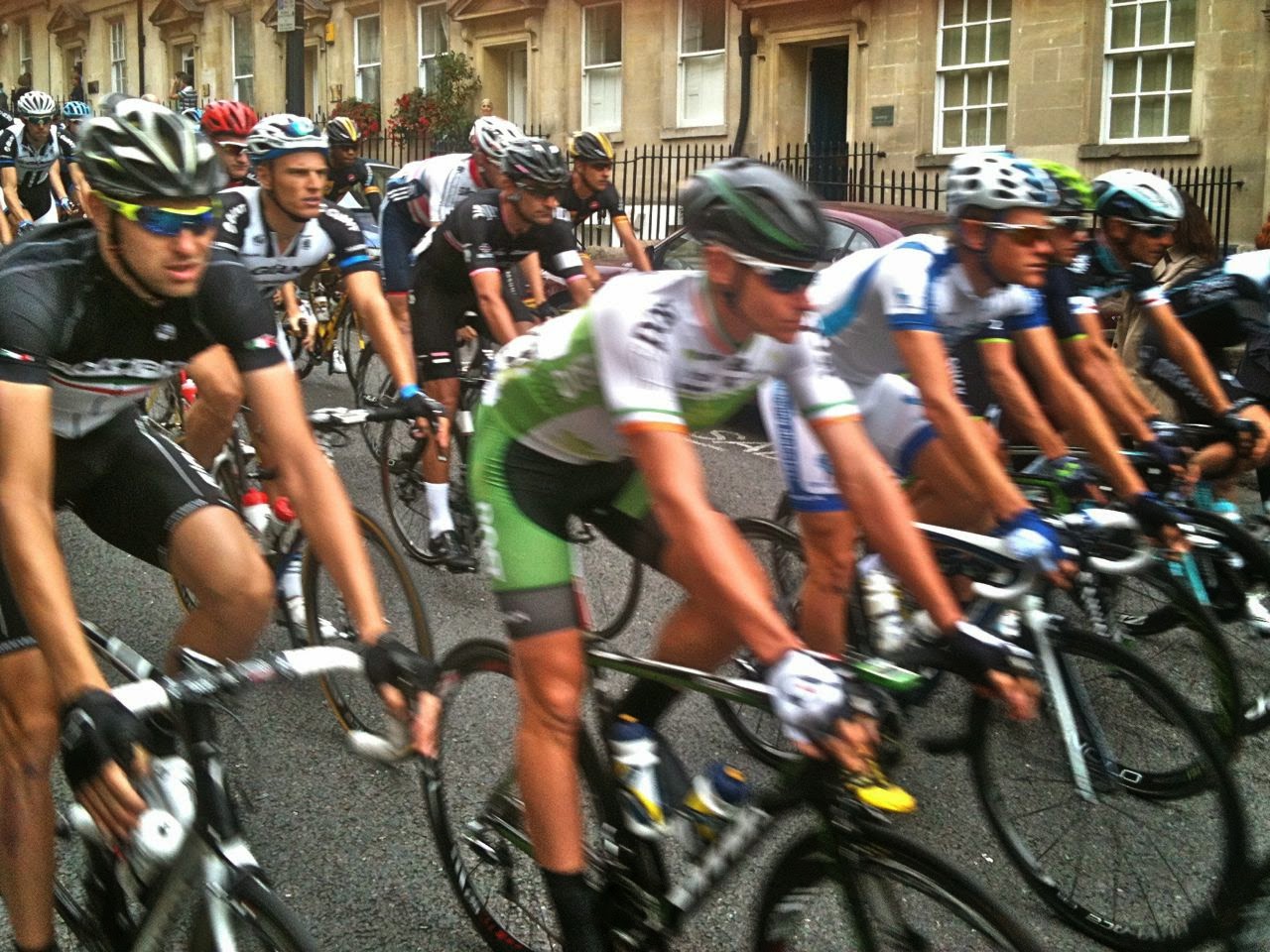 That's not to say they were going slowly, they had some pace but nothing exciting. This seemed like a warm up and when they got onto the hills out of the city, the race proper would begin. 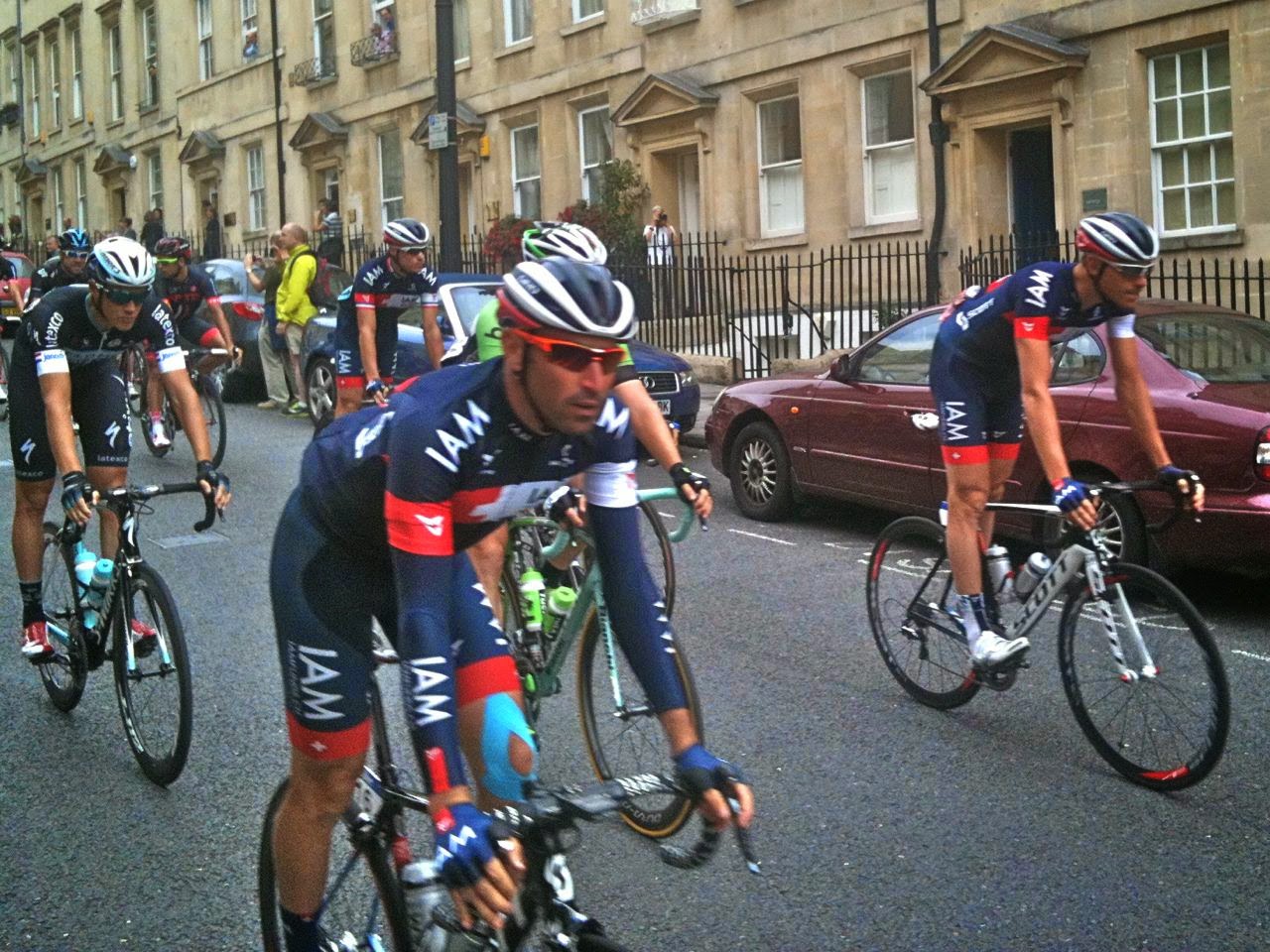 As a keen cyclist myself I looked at these bikes and cyclists and felt strangely indifferent. The whole thing seemed completely removed from my world. I use the bike as a practical means of getting about and as a source of pleasure and exercise. This was something else. 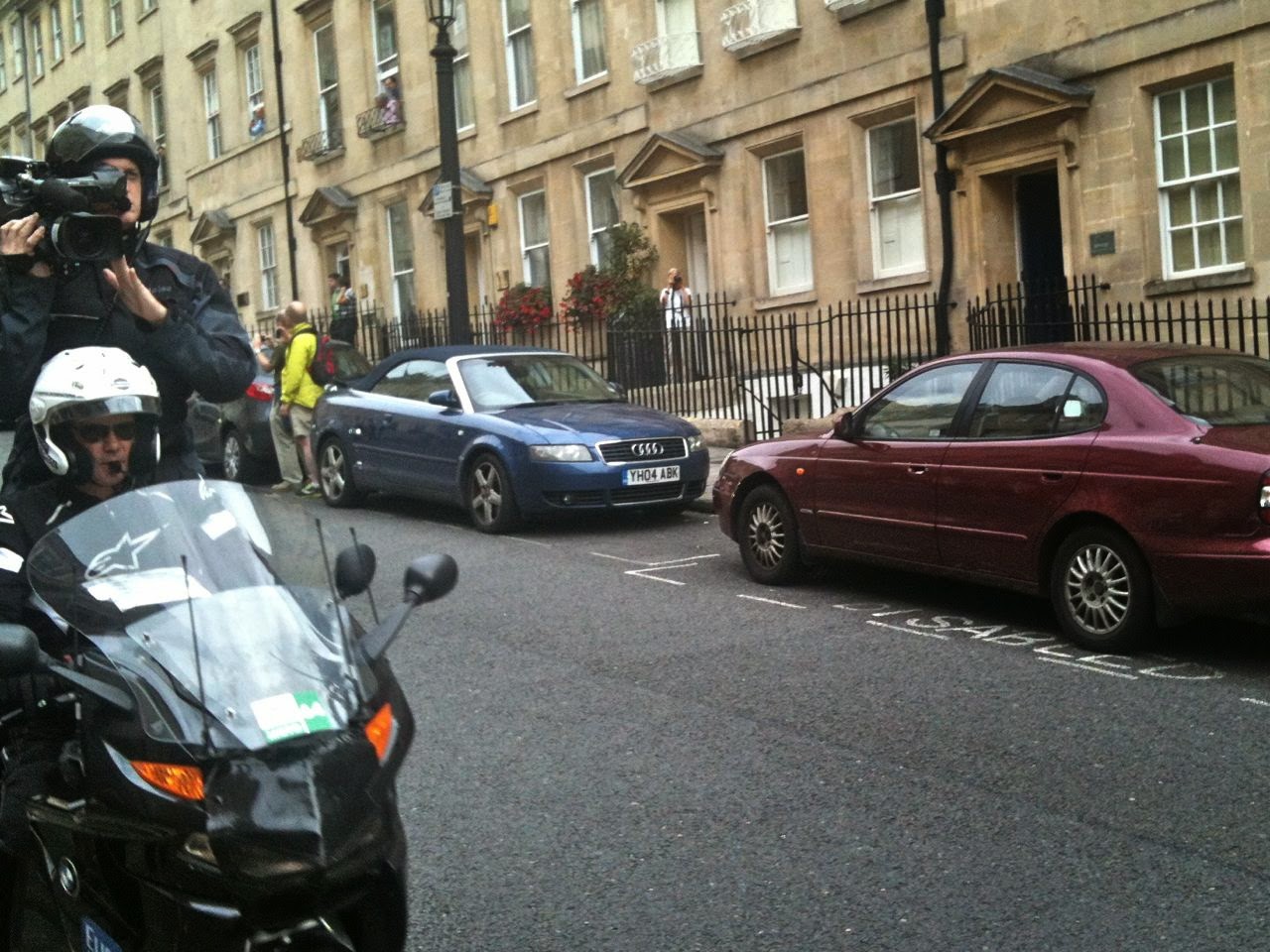 Just as there were a number of vehicles preceding the bikes, so too were there many more following them. First was the cameraman on a motorbike. 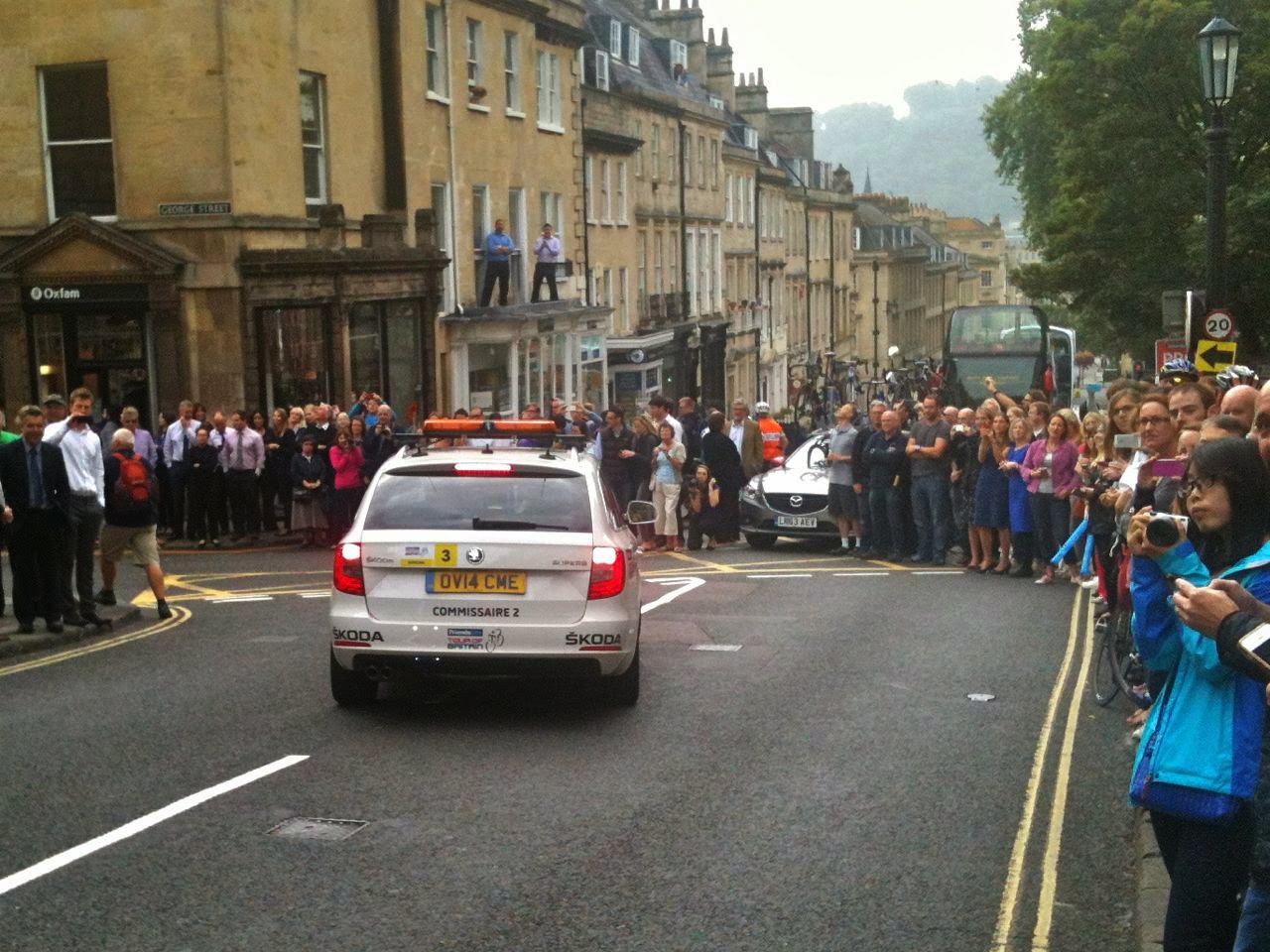 This was followed by more cars and the cars also got a cheer from the crowds, who lined the streets. Seeing as the bikes were all gone in 30 seconds they needed something else to make some noise about. 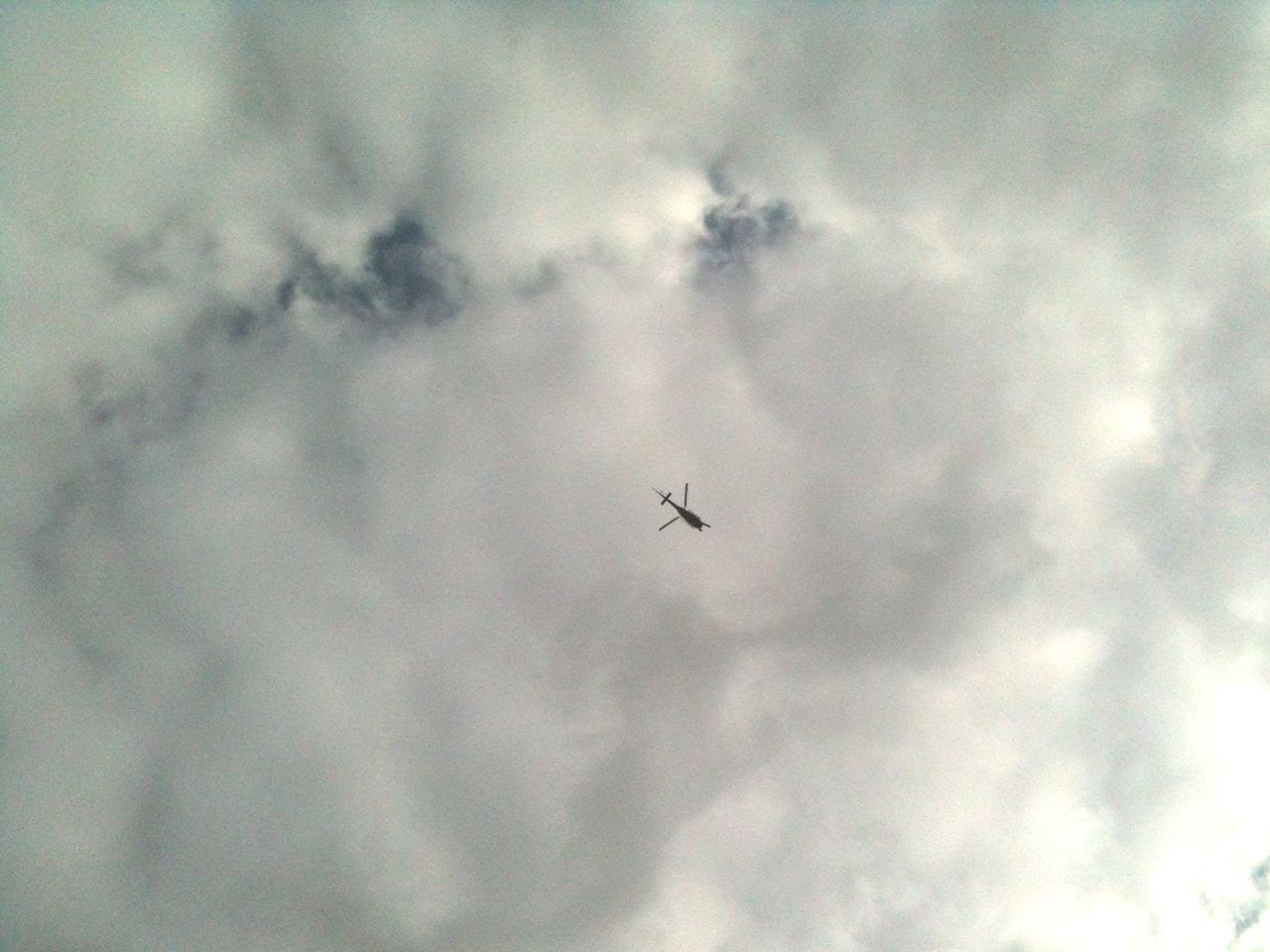 Up above a helicopter hovered over the city. No doubt this had a camera inside and was gobbling up some of the architectural porn which was a good half of the point of having the race come to Bath. The ending point of this stage, Hemel Hempstead, is altogether more puzzling to me. There must be some race logic behind this to do with distances, gradients, location of the following stage, logistics, projected size of crowd and degree of support from local authorities. Still, Hemel Hempstead hardly inspires as a destination. It's not like a cycle race to Edinburgh or, more ambitiously, the Paris Dakar road race, which sets the imagination off. I've been to Hemel Hempstead several times, my brother used to live there and there's nothing terrible about it, it's simply a nondescript satellite town with a weirdly large roundabout. I could imagine a couple of teenagers in Watford racing each other to Hemel Hempstead on their scooters, but that's about the sum of it as a race destination. 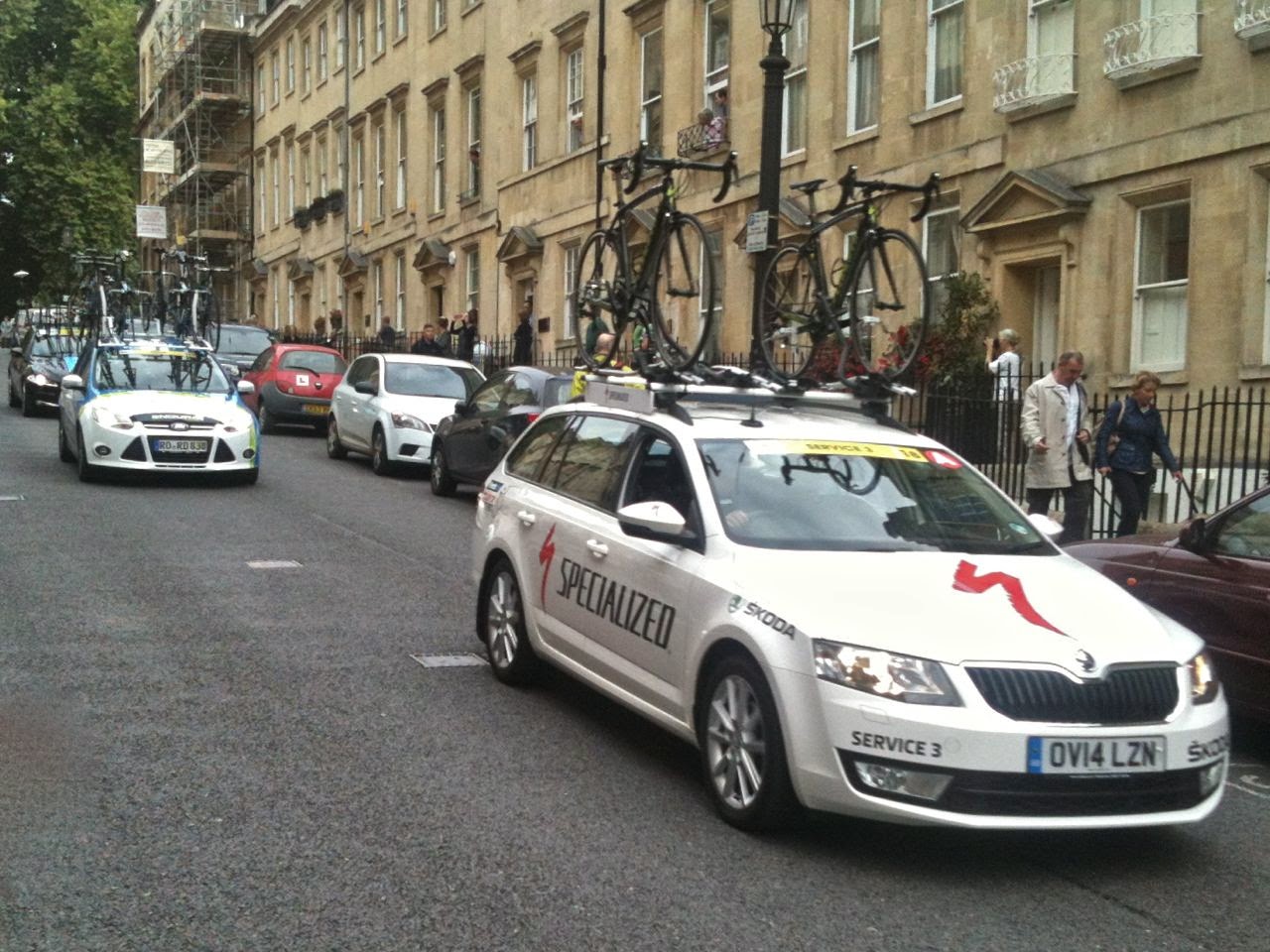 With the stream of vehicles that then followed, much much longer than the pack of bikes, I had to stop and consider how this sort of racing is really highly dependent on the motor vehicle. If I were to imagine a more militantly cycle-centred race, I would design it around a completely different logic so that it would consist of bikes and just two cars: one at the front and one at the back. These cars would time the cyclists and they'd be there if there were road accidents. They could each contain a journalist but that would be it. Everyone else would be on the bikes or at the side of the road. Of course such a race would be near invisible in comparison to this media circus and maybe that's the thing that troubles me slightly about it all. It feels like the cyclists are the decoration and the vehicles are where the real substance of this outfit is to be found. 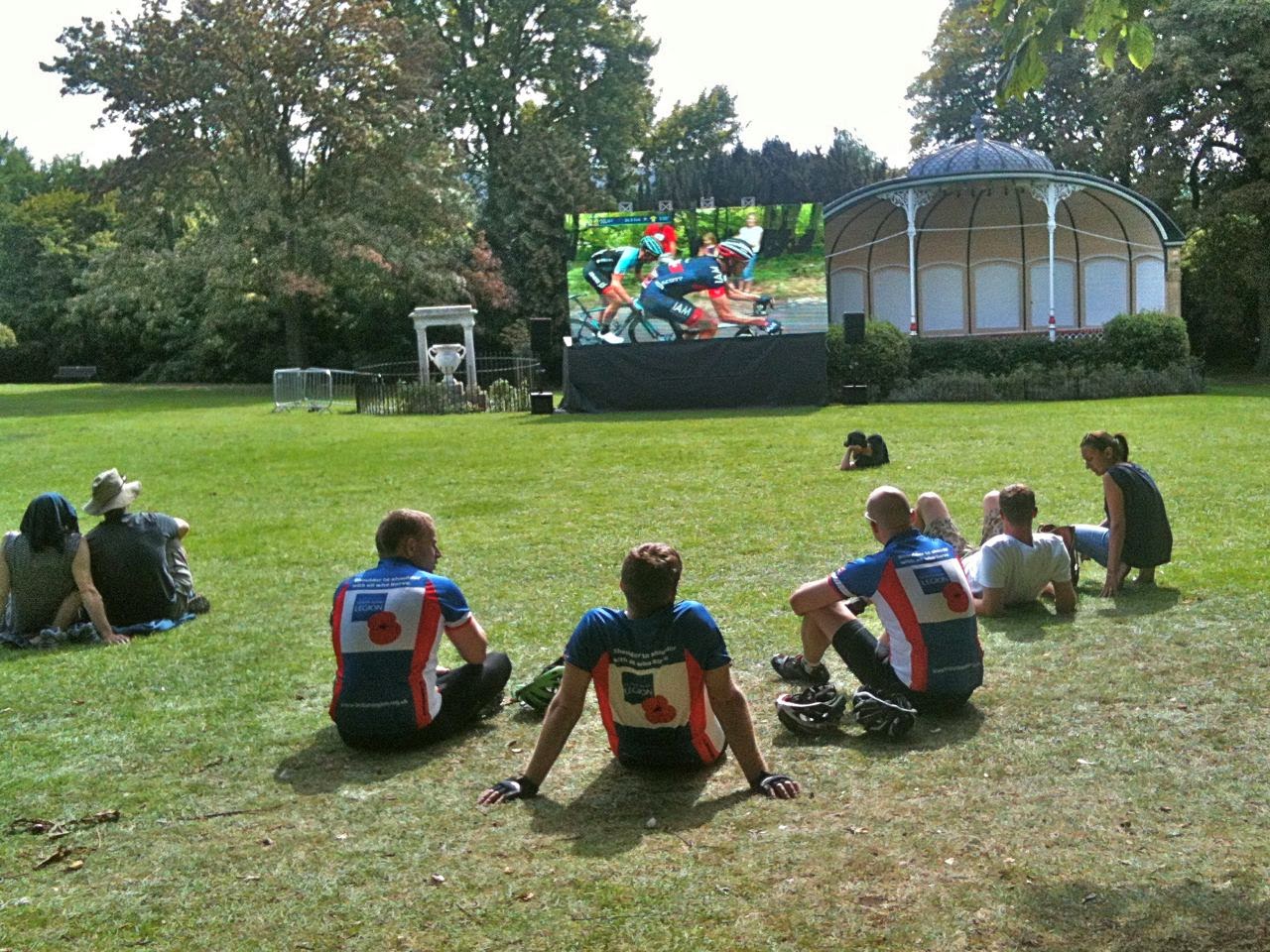 With the bikes and cars out of the picture, the thing to do was to then watch the rest of the race on the large plasma screen erected in the park. Some people came in their cycling costumes, their road bikes parked nearby. Theirs is a different way of cycling to mine, I now see, but I wish them all the best with it. Personally, I like to go off-road exploring canal paths and bridleways, I don't like to be a mobile advert with anyone's logos and besides, with my gangly arms and legs I look daft in lycra. There's many forms of cycling tour and I'll have to cover a few more of them when the opportunity arrises.
Posted by Bill Aitchison at 08:43