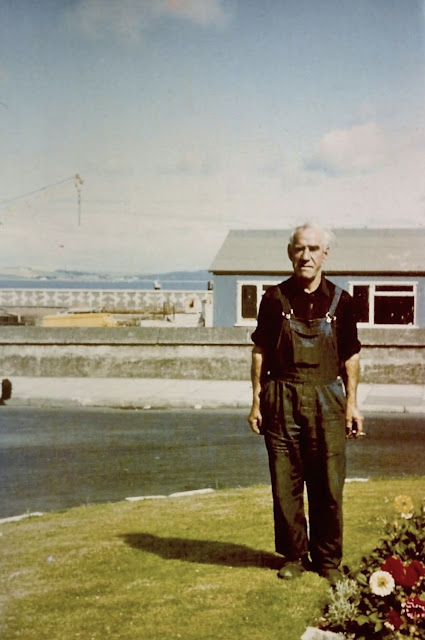 I happened to be in Newcastle and so decided to made a tour of Byker, the neighbourhood in east of the city where my grandfather, Sid Burn, was born. That's about the full extent of my knowledge of his connection to the city. He left the North East and followed work which eventually took him over the border to Scotland, where this picture was taken. Once there, he dropped his Geordie accent and acquired a standard issue Stranraer one: he became a Scot. Something I didn't know about him till I studied this photograph was that he smoked. What else might I learn on this tour? 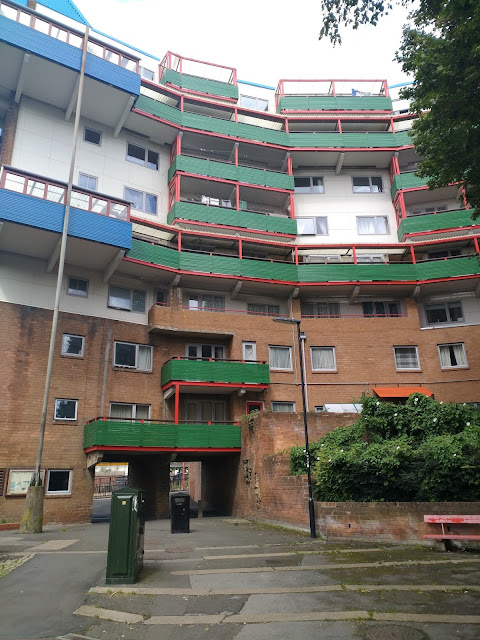 I started with the nearly famous Byker Wall, the large 1970s public housing estate adjoining the metro station. I wanted to see how this family connection might change the way I looked at and made my way around this not so very glamorous suburb. 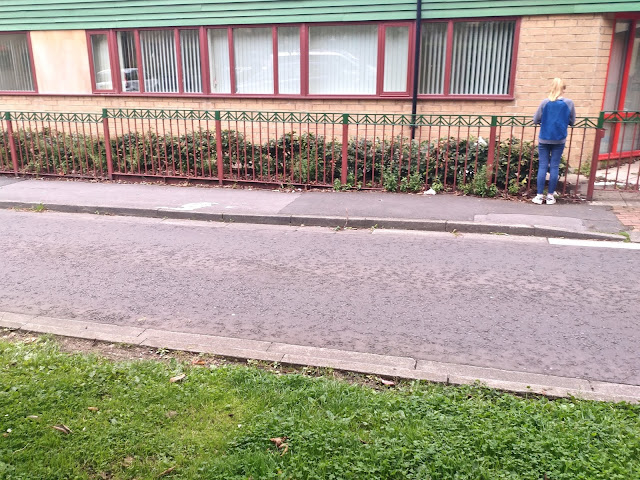 All the brightly painted railings and shutters hanging off the blocks couldn't dispel the gloomy atmosphere that hung over the place. The area seemed turned in on itself. Most of my other experiences in Newcastle have been that people are very approachable but here it was about as open and welcoming as a teenager locked in their bedroom listening to Joy Division. 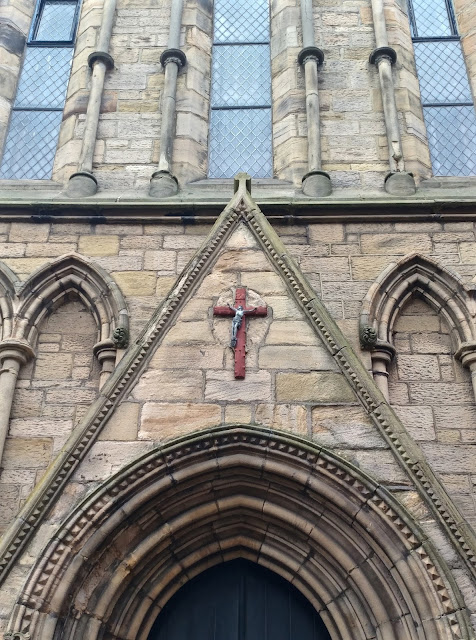 Not having a street address where he lived to head to made this a very speculative tour. I remember him as a committed Catholic, however, so this offered a geographic prompt: find the church he attended. This is the local Catholic church complete with a wonky Christ on the cross. This place is old enough that Sid would have known it, it might even have been his local church for all I know. As he was a builder and mason, my attention was drawn to the stone work. While this place probably didn't bear the trace of his hand, I figured that somewhere in Byker there must be some stonework that still does. 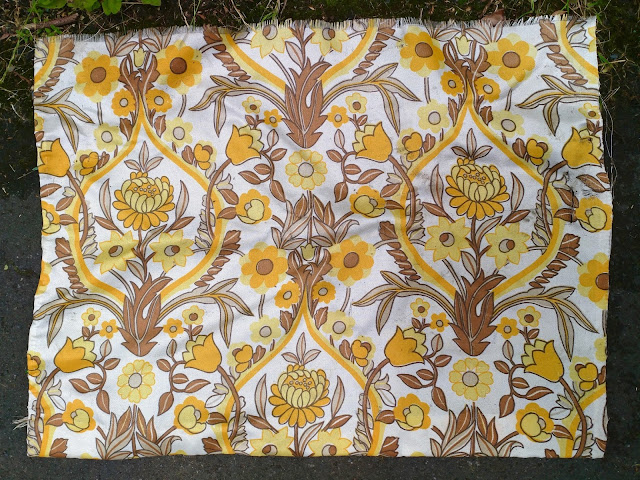 Walking around the estate, it became clear that it was not just the architecture that was stuck in the seventies. I stumbled across this piece of fabric with a design that speaks of groovy health food shops and flared trousers. Thinking further about that time, I realised those were the years my grandfather and I shared: my earliest years and his last. That said, you'd never see him wearing flyaway collars or tie-dyed T-shirts, his tastes were set in the forties. It is interesting, all the same, the way an era seeps into your life regardless of your tastes. I suspect if, in thirty years, I am still alive and were to look at photos of me today, I'd see much more of 2017 in me than I am currently aware of.


Walking down Shields Road, the main shopping thoroughfare, I heard this barnstorming  track by ELO. I was by now tuned to a seventies wavelength and Don't Bring Me Down did not disappoint. I had to hang around until the end of track to get a full fix of nostalgia. 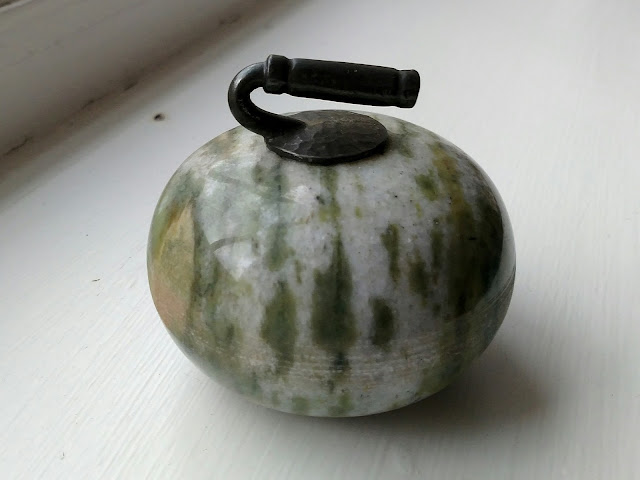 I wanted to take away some sort of souvenir from the tour, something that could act as a reminder of Byker and this afternoon spent walking around in the footsteps of Sid Burn. Finally, it was this miniature curling stone that I took away with me. I chose it because my grandfather was a stone mason and settled close to the Ailsa Craig, an island famous for producing the top-quality curling stones and which does itself look a little like a giant curling stone rising our of the water. 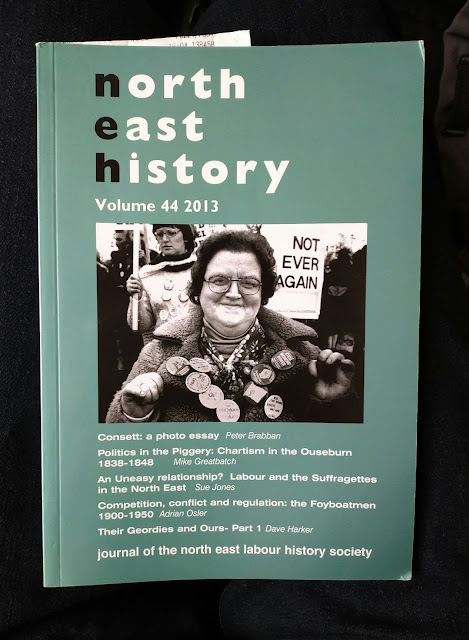 I also came away with a copy of North East History, which looks like a great read. Focussing upon the labour history of the North East, it chronicles the world he grew up in. Because my family is mixed in terms of where it has come from and where it has moved, I lack a strong connection to any single place. Looking at this closer, however, that is itself a condition of a significant portion of the the working class: they followed the work wherever it was offered. Seen as migrant labourers from North East England and Southern Scotland, a more distinct  identity to my family emerges and, while this tour of Byker did not reveal a specific genealogy, it did make clearer this broader affinity. Rather than being from a family with no history, then, I see there is great effort being made to describe and understand how they lived. To describe is to value, and to value is to give greater dignity to their lives. Keep up the good work!
Posted by Bill Aitchison at 09:04