The Longshan Temple Tour: a fortune teller predicts more of the same 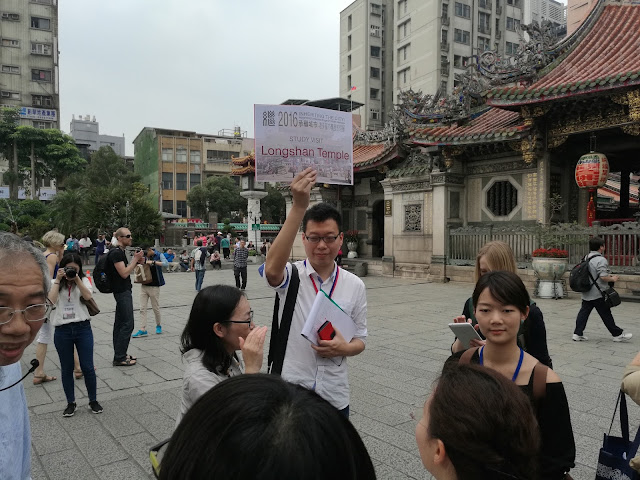 I was in Taipei attending a conference on urban heritage and on day four, once we had all got a bit tired of listening to one another speak, a tour was laid on to break things up a little. We took a bus ride out from the conference centre to Lungshan or Longshan Temple, it seems to be spelt both ways. 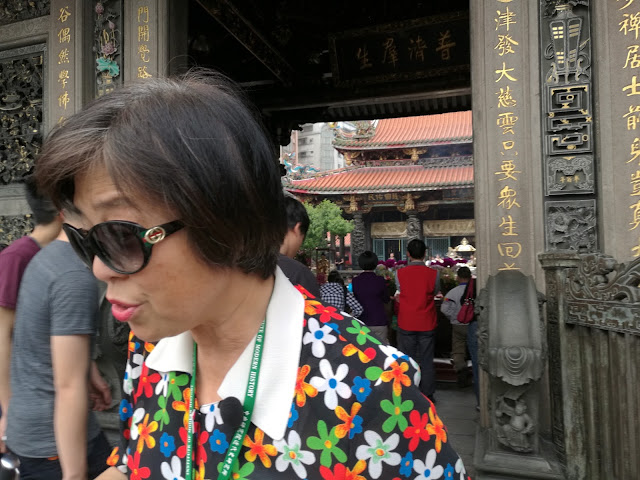 We were divided into three groups each led by different guides from the Institute of Modern History. My group's guide's approach to guiding us round the temple was to first point at things and ask us what we thought it was and to then go on to explain it if, as it often did, her questions drew blanks. This made for a more interactive tour than that of the stereotypical "on your right is..." style of guide. She was trying to awaken our curiosity rather than dampen it. 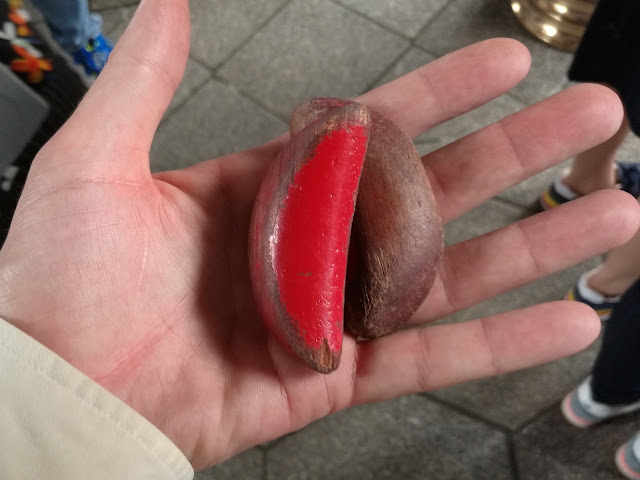 We would have been guessing a long time, however, around some of the features of the temple. She needed to explain how these two red blocks of wood could be used to tell your fortune. 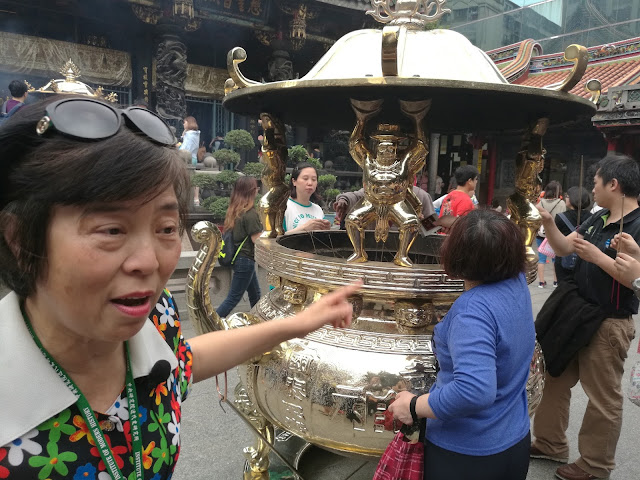 She was keen to point out the depictions of the Dutch on this incense burner. Compared to  the guide who showed me around Nanputuo Temple, the closest equivalent space I have been guided around to this, she was a far more secular sort of guide. She did not present herself as a believer and try to convert us, she presented herself as an expert in the customs and architecture. This was all fine but it took the edge off it. 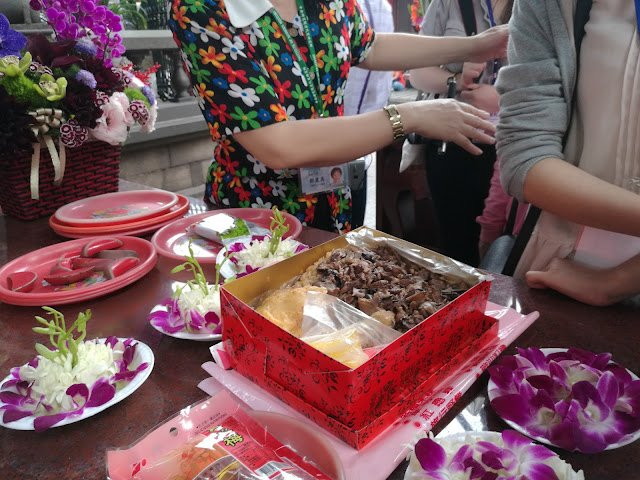 There were a number of different gods in the temple, or statues of them in case, and a busy throng of people circling around, stopping in front of one or another, depending on what they were praying for. I recognised one of the gods as Mazu, a sea god also popular in Xiamen, and here we stopped in front of another, where she showed us a fertility offering that had been left. This was a working temple that people came to, first and foremost, to pray and a tourist attraction, only secondly. 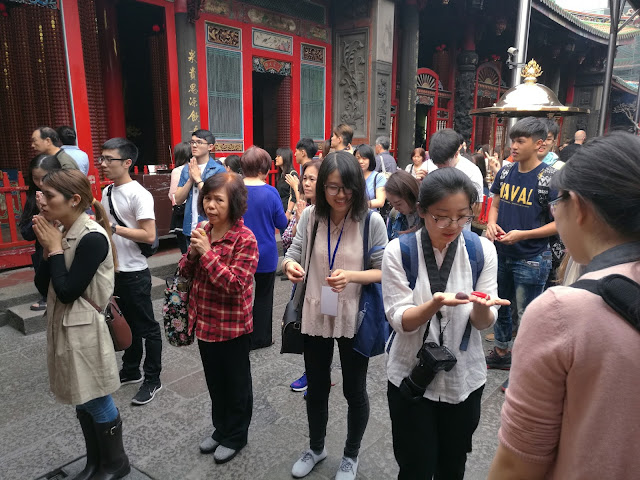 The tour became more interactive again when we came to a god who you could pray in front of in order to meet your future love. It was mostly popular with the young women but a few guys were busy tossing red blocks of wood too, and an older lady as well. Hope springs eternal. 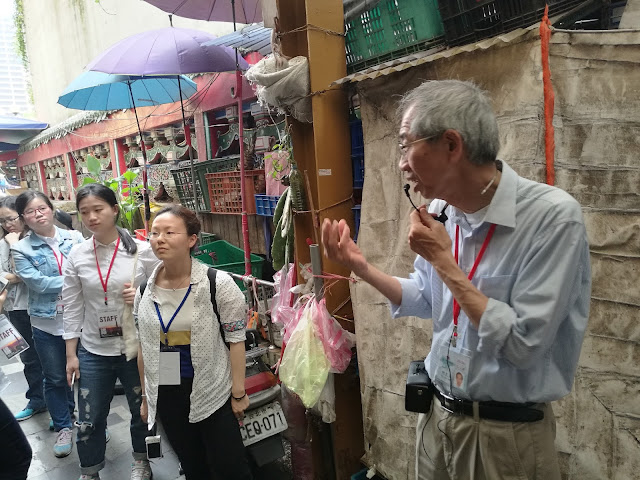 After the inevitable group photos on the temple steps which I read to be the end, the tour unexpectedly sparked back into life. One of the other two guides led the lot of us to an adjacent alley that sold Chinese medicinal herbs. This being a Sunday afternoon, there was little action so we heard about what we would have seen if we had come any other day of the week. In this case it felt like a second best but there are places I can think of where that's not the case. The City of London, for example, is bustling and contemporary during the week but like a ghost town on Sundays making the multiple layers of history more visible. As it was, we looked at a lot of plastic sheets and imagined exotic items arranged behind them. 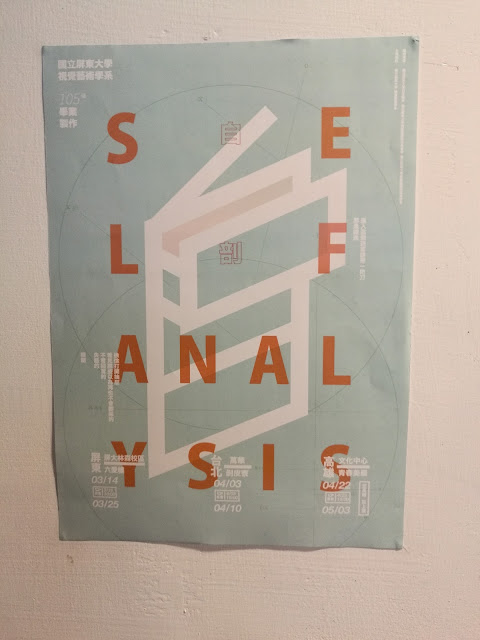 We walked round the corner and into a gallery that proudly displayed this poster sporting an  unfortunate piece of English as a second language typography. The exhibition was a student show of paintings and design. If I had tried to explain, they would probably have thought I was a pervert, so I simply said nothing. 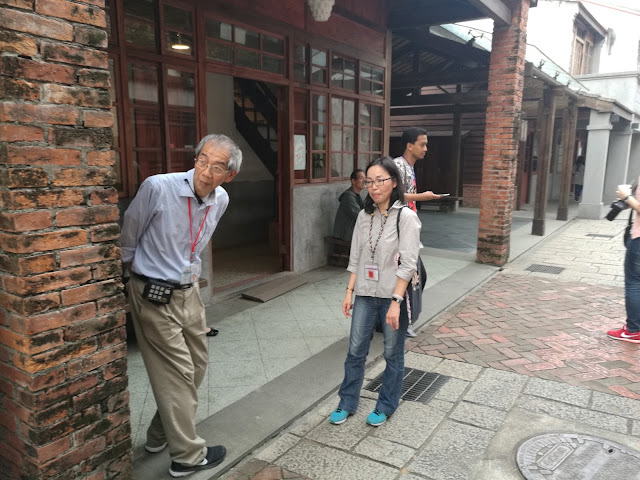 The final leg was led by the other guide which gave me the chance to compare the three of them. They all wore the same id tags and were employed by the same institution meaning there were some similarities in their basic tone and content. However, I realised that my original guide was the most talkative of the three. While it is often thought that the location is meant to be the point of interest and the guide simply there to bring it to life, I rather feel things are the other way round in reality. I'd rather listen to an incredible guide in a boring place than a boring guide in an incredible place. Of course, in reality things are rarely so polarised and it is easier to build the brand identity of a location or institution than that of an individual tour guide. The best guides tend to rise through these systems, anyhow, and the freaks get weeded out yet, it does also mean that the status quo is often what is most rewarded. That indeed was my enduring feeling with this tour: there was nothing wrong with it, it was perfectly professional and even friendly yet, it was also entirely predictable. It was, finally, a tour of the temple not of the guide's learning, imagination or personality, even if I did catch a glimpse of all of these. If I could use those two red wooden blocks to read the future of Longshan Temple, I rather suspect their message would be that nothing much was going to change anytime soon.
Posted by Bill Aitchison at 16:10