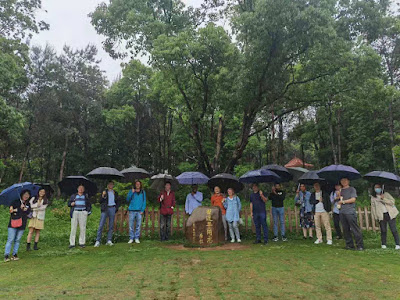 This tour was one organized for a small coach-load of foreign experts, of which I was one, and their Chinese handlers. We drove about half and hour out of Changting, not a big place in its own right, till we arrived more or less in the sticks. It was raining pretty hard as the guide lead us up a slope to our first stop: a tree that Xi Jinping had personally planted. This seemed to be the centerpiece of the park and between that and the driving rain, it got the tour off on a distinctly anti-climatic note. I had that same sinking feeling you get going to B-list tourist attractions the world over: this is a place of minor interest trying to pump itself up. 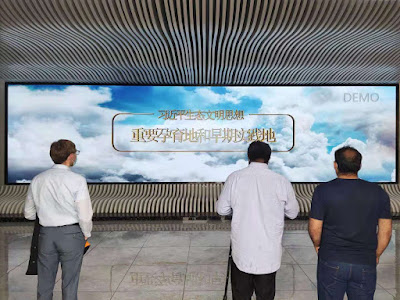 Drying ourselves off inside the visitor centre, we were treated to a mind-numbing video that featured lots of aerial photography. If you have sat through videos like Amazing China you'll be more than familiar with this shock and awe aesthetic. 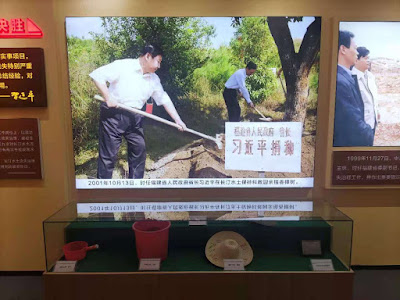 We came to an exhibit that showed President Xi planting the tree we had visited earlier. Not only was there the picture to prove it, there were also the holy relics used in the act: the plastic bucket, the spade and the sun hat that the then governor of Fujian Province used to plant the tree. As he was not the president at that time but just the governor of a minor province, I started to wonder why the park had kept the ephemera of his visit, as the personality cult only seemed to have started later. 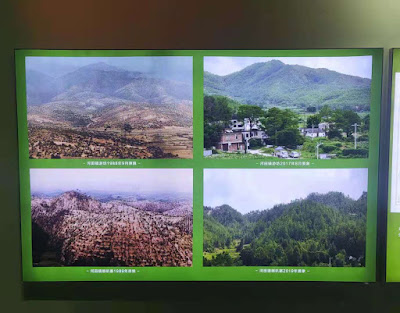 The visitor centre felt like its purpose was not so much to educate people about environmental protection but rather to convince them that the government was, and always has, been doing a good job. Something, however, didn't add up. In general they pursued the same general line as this article in The Global Times, "In the 1940s, the area of soil erosion in Changting county, East China's Fujian Province, was nearly 1.5 million mu (1,000 square kilometers), covering one third of the county's land area. However, after 70 years of efforts, the county has undergone a complete change, and little trace of the past can be seen." Yet when I asked the guide why there was so much erosion in the first place the guide said it was because the people were so poor they had to cut down all the trees for power. This doesn't exactly sit well beside the description of Changting as an extremely prosperous town during the early 1930, a so-called 'little red Shanghai.' It must have fallen from that position after that time and indeed in this photo they show the barren hills of 1988 and 1989. The most obvious conclusion is that the real conservation work only began in the 90s.
The videos that are shown around the centre are generally all like this: they attempt to beat you into submission. They all feature this sort of stirring heroic voice which, I heard, is popular with old people. The thing that struck me about the videos is they all used demo versions of the software; you can clearly see DEMO written in the corner of all of the videos. This, how should I say it, broke the spell of the park's magnificence. 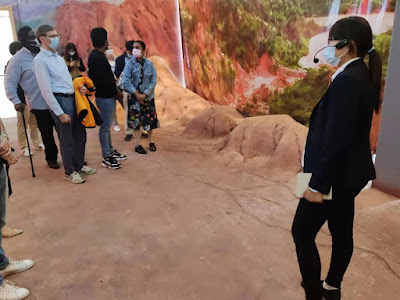 By the time the tour came to its inevitable conclusion, a group photo holding a red banner supplied by the work unit, I had had more than enough of the place. I felt like they were taking me for a fool and just spoon feeding me propaganda that I was expected to regurgitate whole. There was indeed a team of China Daily reporters who just happened to be waiting for us on site, interviewing us and expecting us to do just that. I gave vague replies that would neither land me in trouble nor be of any use for their article. With distance I now am left with a different impression still. As something of an environmentalist myself I am pleased to see this work taking place. It should not be taken for granted. What's more, I get the impression that China is starting to make greater efforts at environmental protection than before and that this park is not an isolated phenomenon. Given the one-party-system that is in place, particularly as it currently is, it is not at all surprising that the park seems to be more about politics than it is about nature. So while that side of the visitor centre can produce an unintended effect, at least with foreign visitors not accustomed to such sycophancy, we should not allow that to obscure the fact that something meaningful is still taking place. That, finally, is what will matter more in the long run.
Posted by Bill Aitchison at 15:40