The Flying Tigers Tour of Changting 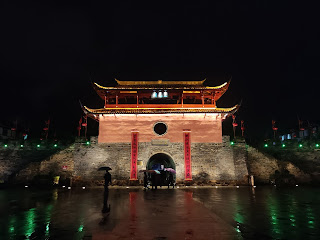 This tour started off as something quite different to what it became: a domesticated cat that turned into a tiger. The group I was visiting the town with were to be shown the historical town centre of Changting but as it was raining and the organizers simply said, if you want to see it,  walk to your left seven minutes and look around for yourselves. This did indeed bring us to a brightly lit building that sat over the remains of the town wall. 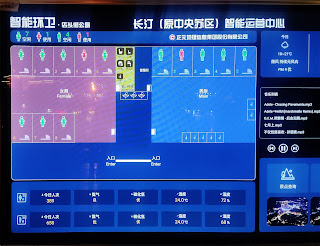 Few seemed keen on braving persistent rain so my group was just three European guys. We had the idea of looking round the old town and seeing if there was an Irish Bar or something similar. We traipsed up and down sodden historical alleys and stumbled across a distinctly 21st Century toilet. Outside it has a screen that shows how many cubicles are inside and which are currently in use. In spite of this, there was still no toilet paper. 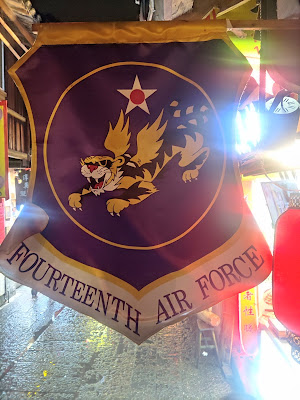 More or less giving up hope of finding that mythical Guinness we dropped into an insipid cafe then hit the street again. This sign caught my attention. I had known there was an American airbase in Changting and had even asked about it previously but our guide answered vaguely and changed the subject. Now we had stumbled across some traces of this history. 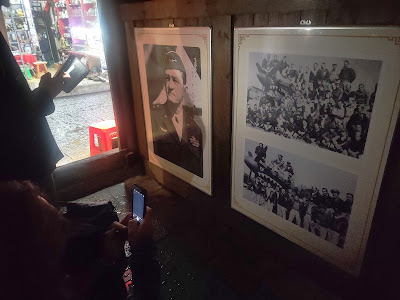 Next to the banner were some pictures of the steely Claire Lee Chennault. A retired Texan airman, he was in China in 1937 doing a three-month air surveying contract then was propelled into the rank of colonel, aviation instructor and procurer for Chiang Kai-Shek's air force. His is a swashbuckling war story. Working basically as a paid mercenary for the Chinese, he formed a volunteer air corp known as The Flying Tigers which recruited in the US and fought very effectively in China. They were later incorporated into the regular American air force which he re-entered as a Major. He emerged as a war hero, finished an honorary Lieutenant General and is buried in Arlington. In all the accounts, however, he comes over not as military brass but instead as "one of the boys." He is even meant to have opened a brothel in Guilin for his men with the justification "his men needed sex and it was better to have his "boys" visit a brothel that was regularly inspected to reduce venereal diseases." 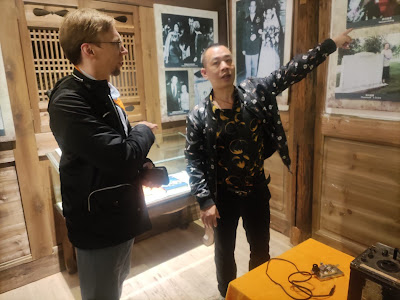 As we were lighting up the pictures with our phones and studying them a man stepped around the corner and ushered us inside. We walked through a restaurant and into the 'museum' which was closed. He turned the lights on and showed us around. This was not really a guided tour, it worked more on the level of, here are some things, take a look. 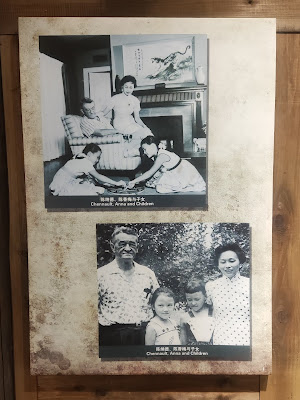 One interesting thing that the pictures made much of was Claire's second wife Anna Chennault and the couple's two Chinese American children. There is an interesting history here: after the war the family returned to Chennault's home in Louisiana, where there was still a law forbidding marriages between whites and non-whites, and to a town where there were no non-whites. His status as a war hero apparently silenced any objections to his Chinese wife and mixed-race family. Little of the detail of these stories was conveyed in the exhibition itself, what came over more was a sense of gratitude for help in time of war and pride in connection to the outside world. The other feeling I got was that the exhibition did not need to happen and nobody in authority was going to make it happen. This was one person's passion project. 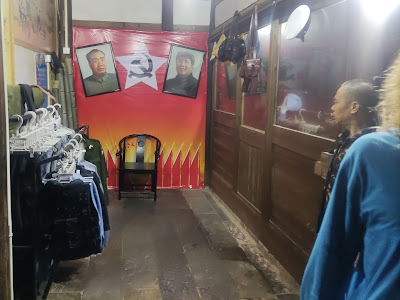 This history is one that is not celebrated today, indeed it is more or less written out of the official script as history is viewed as a resource to draw lessons from, and there are no useful lessons to be gained here. This suppression of the history was very clear in the official tours of the town. We were told about the bombing of the town by the Japanese but it was never mentioned why it might have been bombed: it had an American airstrip. Later I even asked our guide, "where was the American airbase?" She said it was very far, a town four or five hours drive away. When I showed her these pictures from the museum she corrected herself and said it was just outside Changting. This conspicuous silence is due to the deteriorating political relationship with the US and it is manifested at the micro level up and down the country. This Flying Tigers collection was, therefore, surprising to find as it was clearly out of step with current policy. That might explain why the place felt it necessary to include some red references so nobody was in any doubt about their patriotism. 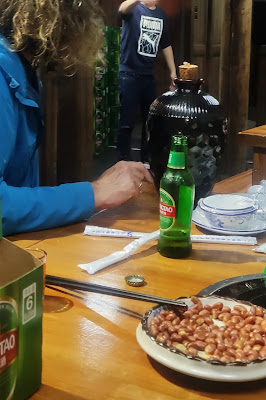 We had not forgotten our original purpose of finding an Irish Bar and by now it was woefully clear that was out of the question. Since the guy from the restaurant had been kind enough to show us around the collection, we ordered beers and settled into our Tsingtao. The place was dry, it had a warm wooden feel to it and they brought out a plate of complimentary peanuts. I was definitely warming to it then down the stairs came a Chinese colleague of ours, also on the trip. His group had found this place too and they were upstairs eating and drinking. He giggled and brought down a brown 1.5 liter bottle. He invited us to try "Red Army Coca-Cola." It was sweet, dark rice wine. It was quite easy to drink but between the bottle looking like an oversized hand-grenade and its earthy taste, I was sure it was perfect hangover juice. So, while we didn't find Michael's Blarney Stone, we did enjoy a stroke of luck and got both a nice place to drink and an unexpected tour of the Flying Tigers Museum of Changting.
Posted by Bill Aitchison at 09:02