Today I took The Alternative Tour around East London. The name immediately makes me wonder, what is it an alternative too? We gathered around a statue of a goat beside Spitalfields Market at noon and finally there was a group of 20 of us, most of whom were visitors to the UK. Our guide Doug checked us off his list and then make a brief introduction to the tour. He didn't bother with the typical health and safety routine that many guides give, but instead told us the themes we'd be returning to and reminded us that this was a pay what you want tour which went to pay his rent. 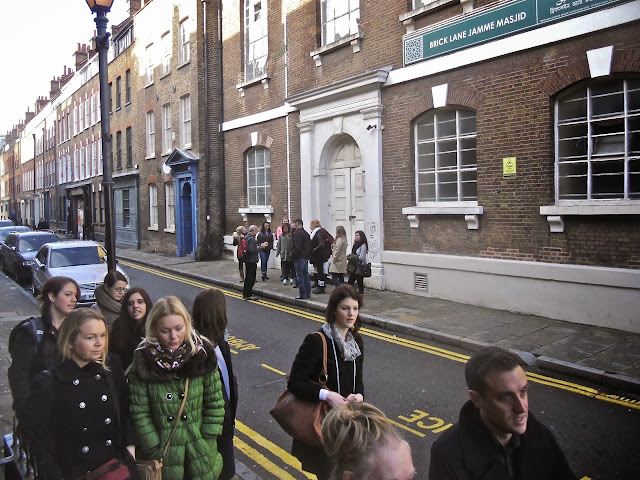 We set off and got a smattering of historical information about the waves of immigration that have made the area what it is. We stopped in front of the church where he even made a joke of knowing practically nothing about Christ Church, a good way to say this wasn't important information for this tour. We came across a few tour groups in the street as we made our way around such as the group in the distance. Their tour did seem to be more involved in the history as I saw them enter Christ Church before heading down to towards the mosque where we caught up with them again. 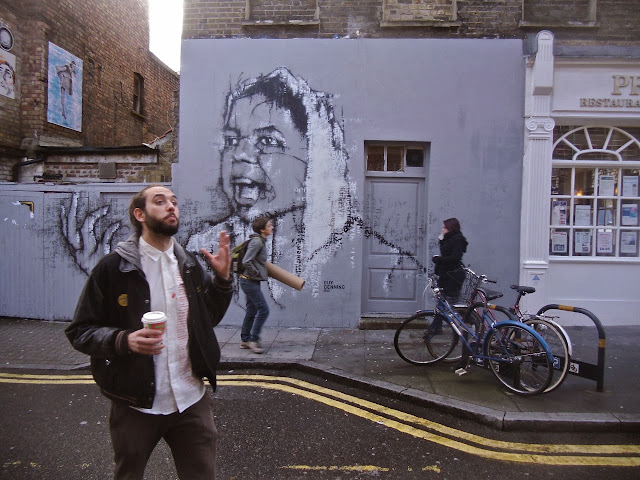 It was when our guide started talking about street art that he really got into his stride. Here he was extolling the virtues of street art and telling us about the artist who made the work behind him, his background and how he made this piece. He also told us that he himself was also involved in street art, mostly through making videos about street artists. 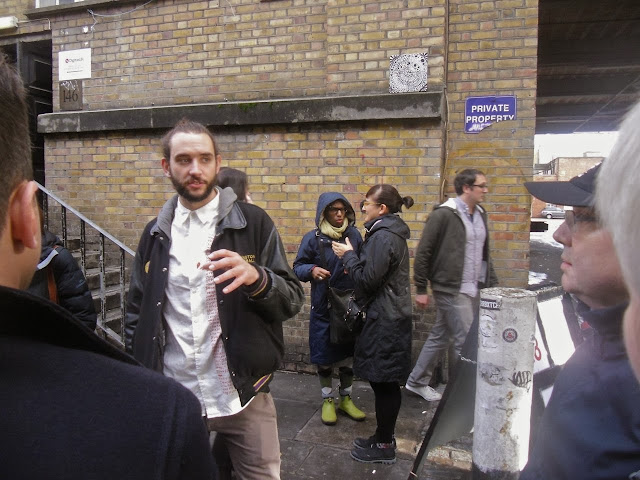 We then arrived at Truman's Brewery and got the history lesson on the rise of the hipsters. He seemed to say that the closure of the brewery freed up a lot of space that was colonised by creatives, space which was now getting ever more expensive and un-creative. While the was a street art tour the not so subtle subtext was that this was also a gentrification tour  located at the moment when the artists who started the trend have themselves been moved on and nostalgia for the good days has set in. 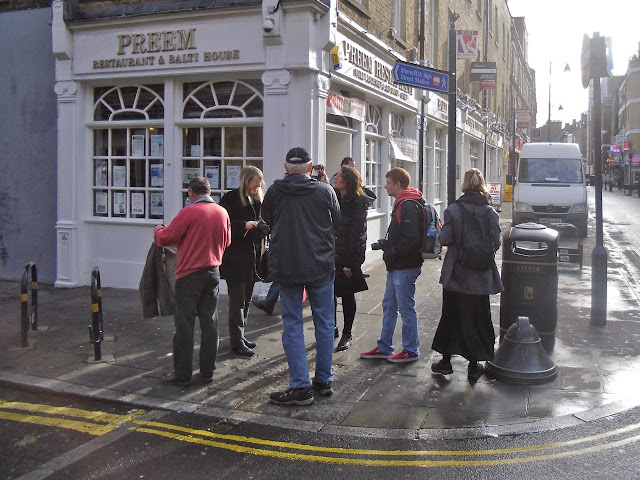 This was another tour we crossed. They were also interested in street art, though they seemed fewer in number and a bit older than our group. It seems that wherever there is a popular formula that works, rival tours exploiting the same route and theme quickly spring up. This alternative tour therefore had its rivals, just as the Jack the Ripper tours (to be covered imminently) are a veritable small industry with as many as 10 of them in competition pounding the same streets. 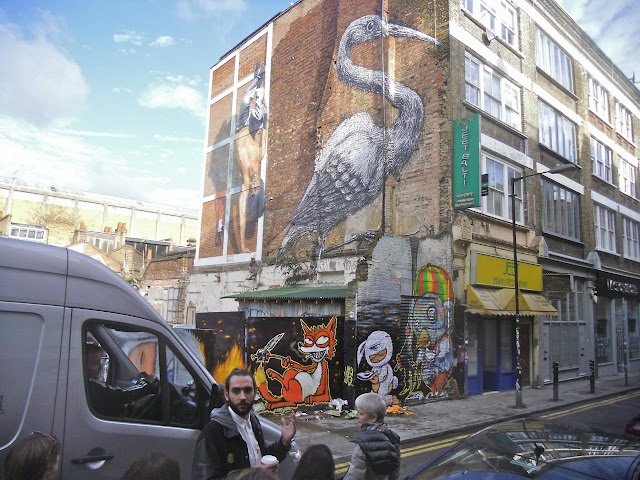 We then got onto some of the larger works: the street art jewels of Spitalfields. We learnt how the area attracts a constant international roll call of street artists who come here to leave their mark. He explained how this work is inherently temporary and often gets quickly painted over. This crane however would take quite some work to disappear given its size and prestige. He also pointed out how some of the work references its actual location on the street while musch of it is generic and could appear anywhere. It seemed like we were getting a 101 class in street art appreciation! 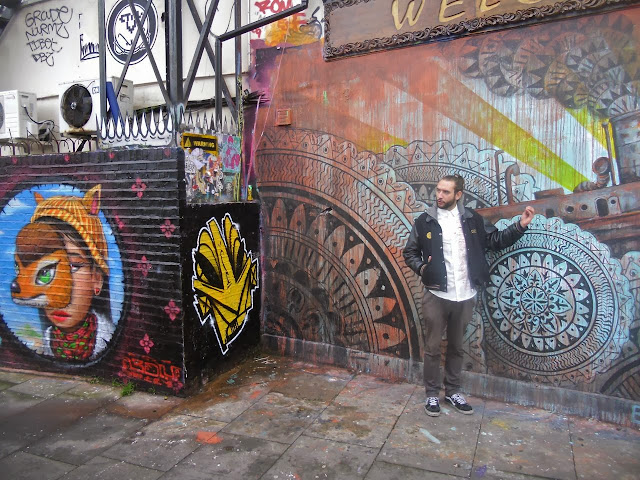 We continued to inspect some very recent work which, in street art terms, means it was less than a week old. He then pointed out the different techniques that were used to apply paint such as spray cans, brushes, stickers and tiles. 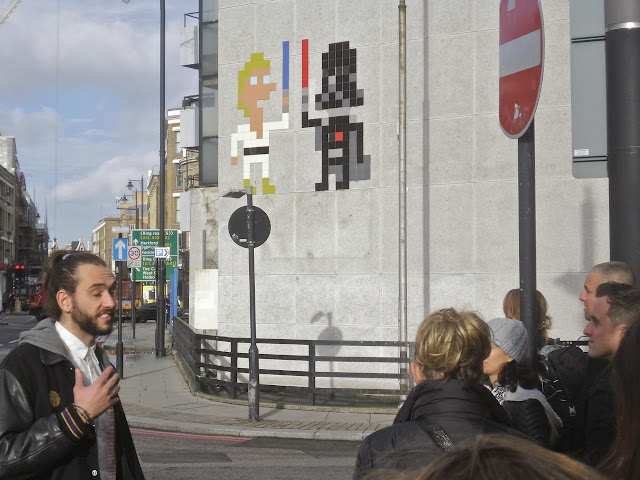 We then got a discussion on the legality of street art and the different tactics that artists use to get their work up. This piece by Space Invader was apparently done at night by wearing high vis jackets, coning off the street and looking like workmen. 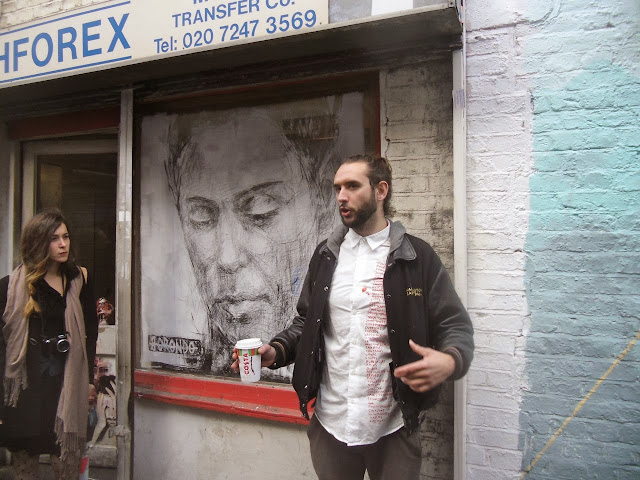 The Eastward creep of the City of London and corporate business was roundly decried on several occasions. I felt he would have made his point better, however, if he hadn't have been carrying around and sipping from a Costa coffee cup for at least half of the tour. It sort of undermined the argument a little. 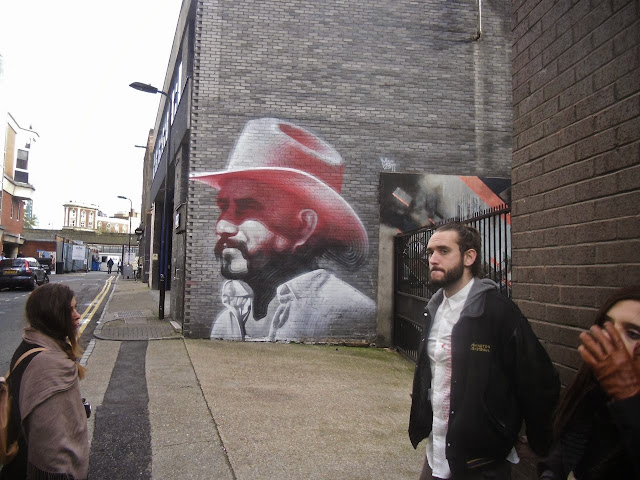 He took us to his favourite works which were located on slightly quieter roads. These had escaped the fate of the Brick Lane works, namely being painted over by other artists. 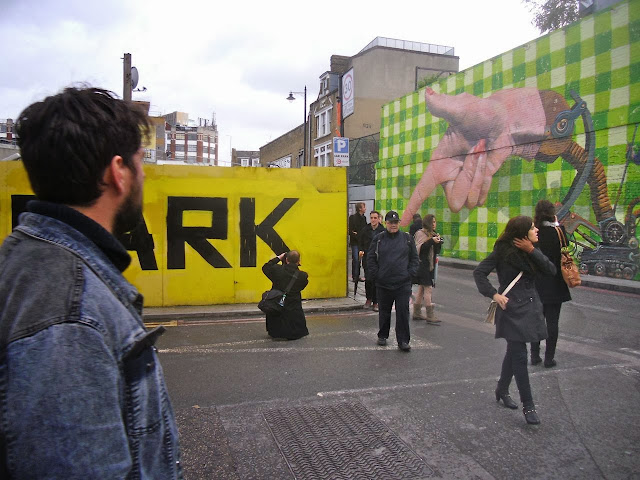 It seemed that everywhere I looked there was more street art. What's more, even the simple car park sign that was not street art was being photographed like it was. I was left with the feeling that this neighbourhood is a bit too over-represented, located as it is in a media zone undergoing galloping gentrification. Doug was not shy of giving his opinions on this and given this was "The Alternative Tour" I was happy to hear them. The general hook seemed to be that this was a tour where you would get a real person giving their honest opinions rather than a formulaic message. Even the bits where he went off on one leaving behind his own script went to build this impression, so it worked in a sense. In any case, he was a likeable enough sort of guy and I always have time for an opinionated Scot. 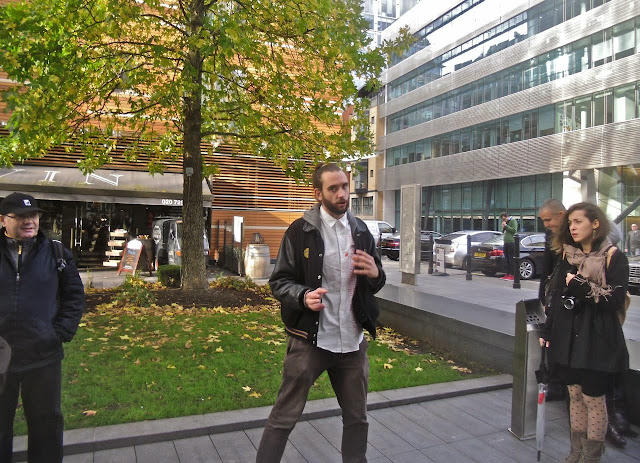 The tour concluded with a little self promotion and money collection. It was not heavy handed but done simply and cleanly. My overall impression was that his position as being in solidarity with the artists who were now being pushed out was a compromised one from which to critique this process of gentrification. If he were one of the Bangladeshis maybe he would be on a surer footing, I don't know. I sympathise with this position having been in it long enough myself in many different cities, however, it is not a very strong one from which to critique the very process that you yourself are simultaneously, if unwillingly, aiding. As such, I think he might have been safer sticking to talking about the street art as this was clearly his passion.
Posted by Bill Aitchison at 21:07